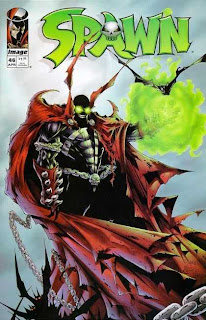 Summary: Several of Tony Twist’s enforcers are murdered by Tremor. He soon tracks down Vinnie, the man who can locate Twist. Tremor takes Vinnie to Twist’s home, but he can’t bring himself to kill Twist when he reveals that he knows where Tremor’s brother is hiding. Tremor leaves with Vinnie, dragging him to Spawn’s alleys. Tremor asks Vinnie to repeat the names he spoke earlier. Spawn’s shocked to hear Wanda, Terry, Cyan, and Jason Wynn’s names. Meanwhile, Terry’s flu worsens.

Spawntinuity: Cogliostro lectures Spawn about letting his symbiote take control. He also reveals that being eaten alive by animals couldn’t have killed Tiffany (angels can only be killed by absorbing their light), so Spawn must’ve been duped. Tony Twist divulges Tremor’s real name is Richard and his brother’s name is David. Tremor believed David dead, but for some reason is now convinced Twist isn’t lying. By the way, Tremor still hasn’t been called that name on-panel, and this is his second appearance.

Not Approved By The Comics Code Authority: As Vinnie leaves behind the two women in his bed, he proclaims he’s going to “take a dump.” A narrative caption soon describes the “parcel” he leaves in the toilet after Tremor breaks through the wall.

Review: So, after months away from home, Spawn returns to the alleys and promptly does nothing. Cogliostro’s claim that Jason Wynn was just one part of the conspiracy to kill Al Simmons is apparently enough to keep Spawn from going after him (even though this doesn’t seem to fit the previous continuity, unless McFarlane is referencing Wynn’s deal with Hell from the Grant Morrison issues), so apparently the hero has nothing else to do. Not really where you want the protagonist of your series to be, but that hasn’t seemed to have bothered McFarlane for over a year at this point. Instead of wasting time on making Spawn interesting or giving him the slightest direction in life, we’re treated to several pages of tired mafia clichés. Tony Twist’s men do bad things, a mystery man kills them, the killer is revealed as Tremor, and he shows up at the end to form a truce with Spawn. This eats up almost twenty-two pages. Making this aimlessness even worse is knowing that McFarlane actually does have at least three other ongoing subplots that could’ve been advanced while he wasted another issue with filler. 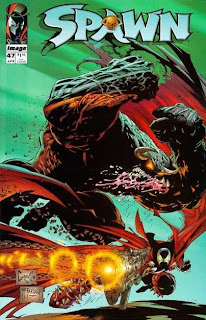 Summary: With Vinnie’s help, Spawn locates Billy, the man assigned to spy on Terry’s family months earlier. Tremor throws Billy in the dumpster, declaring that Spawn must now live up to his end of the bargain. When Cogliostro returns to the alley, he discovers the worms Spawn brought back to the city have killed Billy. Spawn and Tremor invade Twist’s hideout, where Tremor learns his brother David is actually employed by Twist. David refuses to believe Tremor is his brother and shoots him repeatedly. Spawn breaks David’s leg, sending Twist the message to leave Terry’s family alone. Meanwhile, Violator reveals his plan to have Spawn’s costume prematurely send him back to Hell.

Spawntinuity: A narrative caption refers to Tremor by name for the first time. In the letters page, McFarlane admits he forgot to call Tiffany by name during her appearances (notice a pattern?). Violator comments that Malebolgia dropped Spawn into a specific alleyway for a reason, but refuses to go into any more details. McFarlane would occasionally hint at the significance of “Rat City” but I don’t know if the clues ever amounted to much.

“Huh?” Moment: Spawn claims he’s only breaking David’s leg and that it can be fixed at the hospital, while the art clearly shows him shooting it with a gigantic canon.

Review: On the off-chance anyone cared about Tremor and his brother, here’s an issue almost entirely dedicated to their relationship. The revelation that David actually works for Twist is a decent, ahem, twist, but if McFarlane really wants the audience to believe it’s some horrible tragedy that Tremor’s brother doesn’t recognize him, he really needs to flesh these characters out. I honestly don’t think this is beyond McFarlane’s capabilities (before it grew into such a bore, Spawn’s yearning for Wanda in the early issues worked quite well), but he seems to have lost even rudimentary storytelling abilities during this run. Tremor and his brother don’t tie into any ongoing themes or emotional arcs, nor do they have anything to do with the continuing storylines that were supposed to be leading up to #50. The story only connects to Spawn because Twist assigned men to spy on Terry and Wanda back during “The Hunt” storyline, and apparently McFarlane feels Spawn never dished out the appropriate payback. And as great as the art is this issue, the action just amounts to Spawn and his monster friend beating up on guys in business suits. There’s even an opportunity for a legitimate confrontation between Spawn and Tremor after Spawn callously breaks his brother’s leg, but nothing happens because it’s page twenty-one by this point and it’s time for everything to be wrapped up.

Meanwhile, something actually happens in the subplot pages! Okay, it’s just the brief mention of a plan to do something, but that’s better than nothing. We now know Violator is still after Spawn because he wants to prove to his superiors that demons are better than humans, and he knows a way to send Spawn back to Hell soon. Okay, that’s something. I don’t think McFarlane really needed four pages to get that out, but considering the pacing of the previous issues, it’s a minor miracle that any idea was advanced at all.