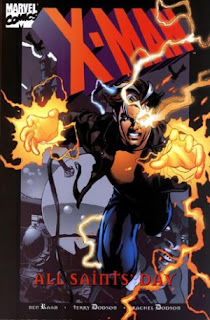 Summary: X-Man befriends Jerome, a terminally ill boy, in the park. Hearing word of a Transylvanian doctor with the secret to eternal life, X-Man travels by train to meet her. He encounters Sebastian and Teresa, Interpol agents secretly posing as newlyweds in need of Dr. Cindy von Mort’s help. X-Man accompanies them to von Mort’s castle, where he soon discovers von Mort’s true identity as the eternal Absynthia. Teresa is killed by Absynthia’s followers, Augustine and Boniface, after discovering one of her kidnap victims. Sebastian helps X-Man defeat Absynthia, but his grief over Teresa’s death pushes him into suicide. With Absynthia in custody, X-Man returns home to spend time with Jerome. He realizes they must make the most of the time they have left.

Continuity Notes: Absynthia reveals that she was a countess obsessed with cheating death after losing her young husband. After giving up, Diablo appeared, offering her a suicide potion that would reunite her with her husband. Instead, the potion granted her eternal life. She now recruits followers to aid her vendetta against Diablo.

Review: X-Man got a six-dollar prestige format book? X-Man?! I’ll give the creative team credit for producing a story that’s miles above the average quality of the monthly series, but I don’t think “X-Man” and “prestige” should ever be used in the same sentence. Ben Raab writes the character for what I believe is the first time, bringing a different interpretation than what we’ve seen in the regular series. Raab writes X-Man as a prototypical teenage hero; he isn’t snotty or irrational, but instead fairly good-natured and willing to help the random people he comes across. X-Man doesn’t usually speak in slang (which makes sense, as he comes from a hellish alternate reality overseen by a genocidal maniac), but he now sounds like a cast member on an early WB drama, to the point that he even refers to little Jerome as “m’man” or “m’man J.” This is slightly annoying the first time it happens, but Raab doesn’t let up. Every time X-Man thinks about the sick little kid, it’s “m’man needs help” or “I hope m’man J is able to live a long life.” I can understand Raab’s desire to make X-Man more likeable, but it’s pretty obnoxious.

Ideally, a prestige format story has something to say about the lead character, which puts Raab in an awkward position since the best things to say about X-Man probably came out of Peter Wisdom’s insults when Warren Ellis used the character in X-Man. Raab picks up on the idea that Absynthia is experimenting on her kidnap victims, much as Sinister experimented on X-Man in his reality, which inspires X-Man to stop her. Jerome’s terminal illness also parallels X-Man’s “burnout” problem, which will allegedly kill him before he’s eighteen. The story doesn’t spend a lot of time with the concept, but pairing him with a kid who’s also dealing with his own mortality is a solid idea. X-Man learns that he isn’t the only person with problems, and can perhaps learn some lessons that don’t involve giant explosions. If only the regular series explored this type of a story. Although the monthly title has mostly ignored X-Man’s feelings on death, it is a major theme of this story. Absynthia was cheated out of death, X-Man wants to fight death on Jerome’s behalf, Teresa is murdered, and Sebastian joins her in death; submitting to the desire that caused Absynthia’s dilemma in the first place. Just think, Marvel hired someone to write an incidental X-Man one-shot, and he actually put thought and effort into it.

"Every time X-Man thinks about the sick little kid, it’s “m’man needs help” or “I hope m’man J is able to live a long life.”"

Was Jermome African-American? That always seems to bring out embarrassing urban slang when white writers are involved...

Not counting the ridiculous price, it seems like a decent story, and you do get Rachel and Terry Dodson on art...

Indeed he was. I guess even refugees from the Age of Apocalypse can be condescending white guys.