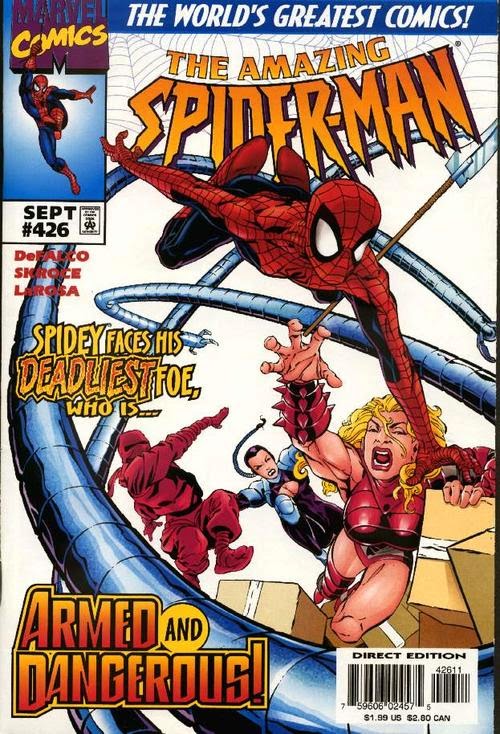 The Plot:  Lady Octopus investigates the robbery of Dr. Octopus’ grave.  After getting the information she needs, she uses her VR technology to recreate Stunner.  Together, they invade the Rose’s secret hideout, where Master Zei and the True Believers are keeping the body.  Spider-Man learns of the body’s location from the same informant that spoke to Lady Octopus.  Soon, Spider-Man, Lady Octopus, and Stunner are fighting the True Believers and Rose’s bodyguard Delilah.  However, after Rose speaks to Lady Octopus and Stunner, they turn on Spider-Man.  He’s captured and bound.  Master Zei declares that Spider-Man will be the living sacrifice in Dr. Octopus’ resurrection.

The Subplots:  MJ visits her therapist, Dr. Reandeu.  Alison Mongrain, meanwhile, complains that Norman Osborn is missing payments.  She compiles a list of “likely marks” she’ll use for money, which includes the Parkers.

I Love the ‘90s:  Peter makes a reference to the Kids in the Hall sketch “Head Crusher” while staring at Paul Stacy in class.

Review:  I don’t think anyone was clamoring to see even more ninjas in Amazing Spider-Man, but Tom DeFalco can’t seem to let go.  After what feels like fifty appearances in this title, the True Believers have yet to prove themselves as engaging, or even particularly competent, opponents.  Even Spider-Man comments on how lame they are during the issue’s fight scene; he’s only taken out when Stunner and Lady Octopus turn against him in the final pages.  I suppose there is precedent in the Marvel Universe for Hand ninjas to raise the dead, as seen in Frank Miller’s Daredevil run, so it’s not totally ridiculous for DeFalco to use them when resurrecting Doc Ock.  The problem is that the ninjas have already worn their welcome out in this book, and they usually come across as pathetic cannon fodder during the fight scenes, so it’s hard not to get annoyed when you discover they’re back for another story.

The issue isn’t a total wash, thankfully.  The scenes setting up Ock’s resurrection are handled well, as Peter begins to question if any of his old foes could ever stay dead.  And there’s at least some attempt to show how this impacts MJ, even if it leads to another scene with her whining to a therapist.  I’m not sure if Lady Octopus and Stunner really needed to return, especially if Marvel was truly serious about moving on from the Clone Saga, but I suppose it’s a welcome callback for fans of the Ben Reilly days.  The true highlight of the issue is Steve Skroce’s art.  While he still doesn’t have a handle on some of the supporting cast members (MJ looks like Kitty Pryde in one scene!), he does produce some fantastic Spider-Man pin-up shots this issue.  His willingness to play with shadows, and his fondness for those multiple Spider-Men on the same panel shots, evoke a nice Ditko feel. 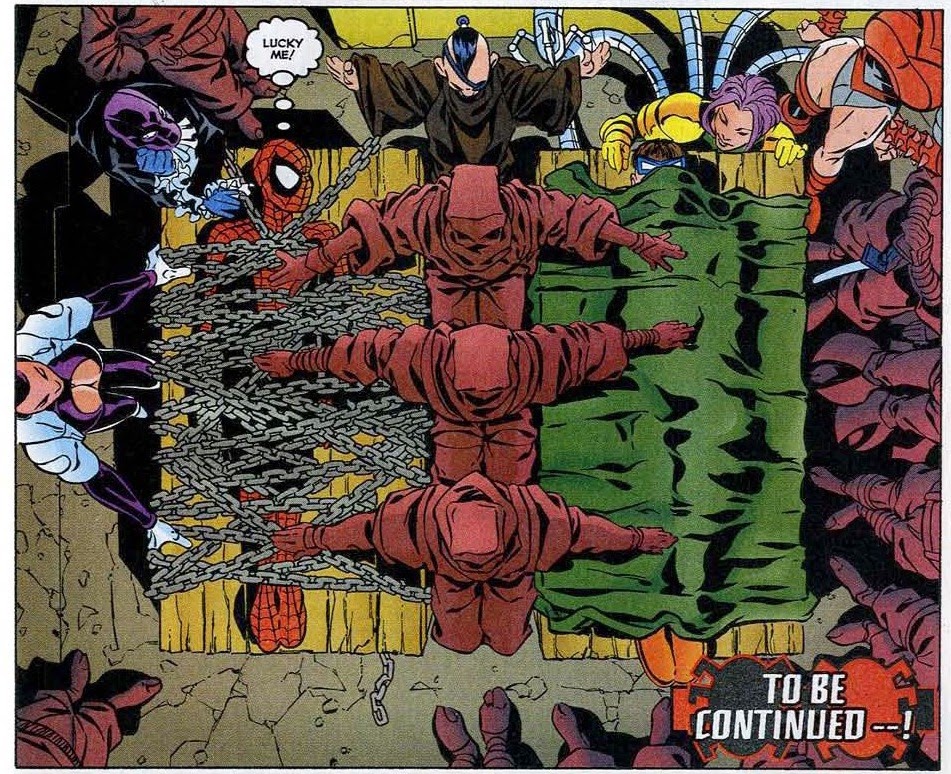 Granted, I haven't read these issues, but nevertheless I like that Doctor Octopus is resurrected. Sure, it reinforces the idea that death is cheap in comic books, but Doctor Octopus is such a classic villain that I think we need to keep him around. Being killed off by Kaine to build up Kaine as the latest big threat was a horrible mistake, and even if this is silly I'd argue that it's for the best in the long run.