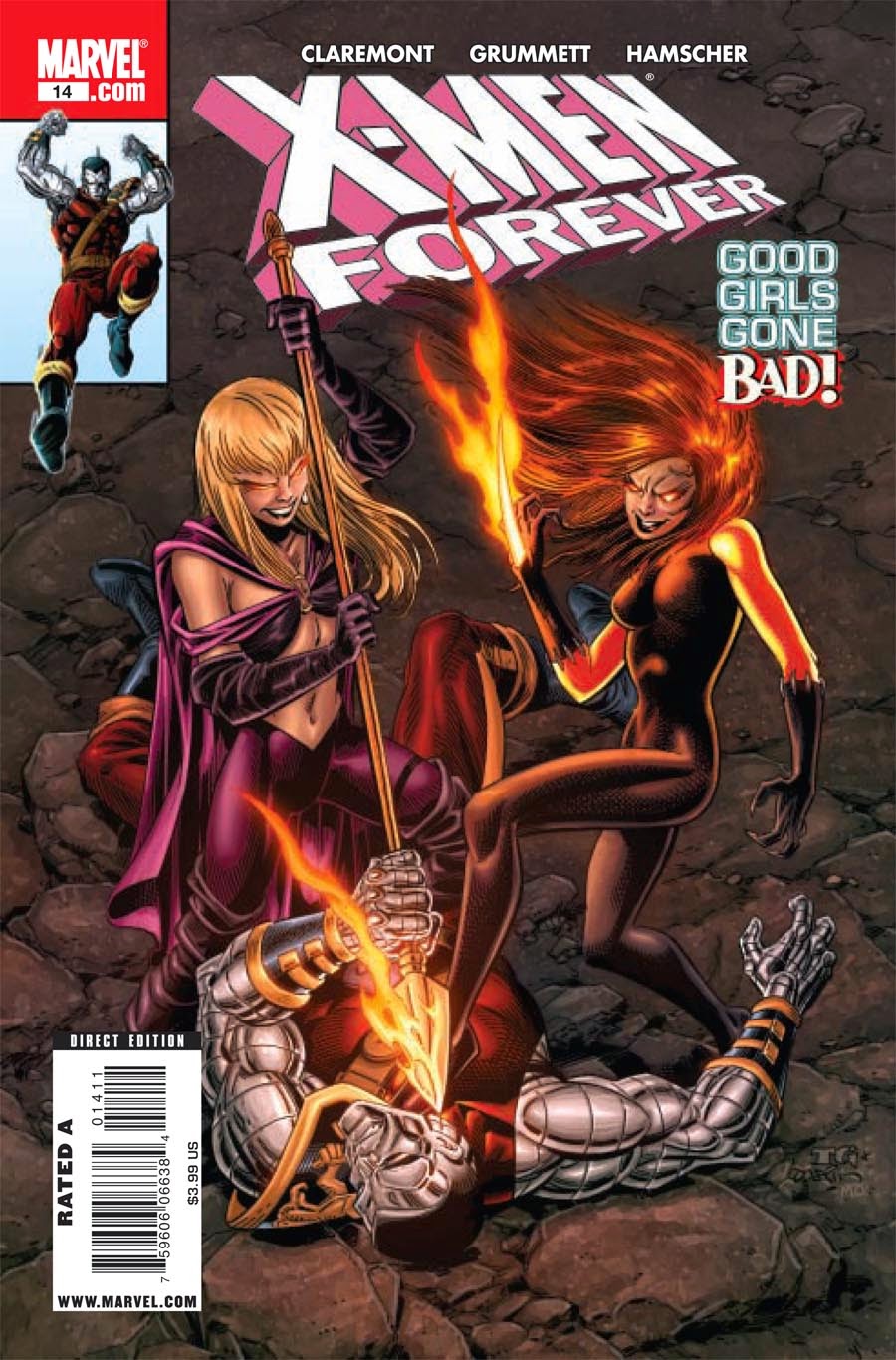 Black Magik Part Four - Darkness at Dawn!
Credits:  Chris Claremont (writer), Tom Grummett (pencils), Cory Hamscher (inks), Wilfredo Quintana & Sotocolor (colors), Tom Orzechowski (letters)
Summary:  Black Magik uses her powers to transform Shadowcat into Firecat.  As Black Widow calls for reinforcements, Gambit and Colossus face the Cossack’s wolf-creatures.  Cossack confronts the team with Black Magik and Firecat.  Gambit reasons with Kitty, and she feels Wolverine’s presence within her.  Her true personality returns, shortly before Black Widow kills Cossack with a headshot.  Black Magik maintains that she’s now her true self and teleports away.  Meanwhile, Beast and Jean kiss after a date, Rogue volunteers to accompany Nightcrawler after he receives a frantic phone call from Amanda Sefton, Nick Fury assigns Daisy and Sabretooth to investigate spies at the mansion, Cyclops goes on a motorcycle ride in Alaska, and a Panther monument in Wakanda lies in ruins.
Continuity Notes:
Review:  Claremont managed to balance the main Magik story with the mansion’s subplots fairly well in the previous chapters, but this issue is a good example of a plot/subplot balance that just doesn't work.  Simply by looking at that summary, it’s obvious there’s a lot going on with the rest of the cast, yet the subplot pages receive just as much attention as the heroes vs. werewolves scenes.  Perhaps Claremont felt that the werewolf fight was a strong enough visual to carry the issue, but I consider the werewolves to be the most boring aspect of the entire arc.   Cossack’s werewolves are just generic goons; visually more interesting than a Hydra flunky perhaps, but still cannon fodder that’s there to eat up pages.  Practically every moment of the issue feels rushed, except for the pages dedicated to the heroes plotting out how to fight the werewolves, running from the werewolves, then returning to fight them again.  While all this is happening, we see brief glimpses of potentially intriguing ideas with the rest of the cast, but none of them is long enough to have any real impact.
When the main story turns the focus away from Cossack’s furry foot soldiers, we’re left with what should’ve been the major focus of this plot -- Illyana embracing her dark side and honestly turning bad this time.  While you might expect this to be full-on Claremontian melodrama, the cast just kind of shrugs their shoulders and makes unconvincing pledges that they’ll deal with her in the future.  Having Magik become a villain does have promise, so I’m not opposed to the idea, I just wonder why Claremont treats the development so nonchalantly.  Ultimately, the Cossack plot isn’t a total loss -- yes, we’re seeing mind control again, but there’s an effort to connect the idea with Kitty’s ongoing character arc -- and there is a nice callback to the Black Widow story from Uncanny #268 for longtime fans.
As for the subplots, where to even begin on this list.  I don’t like the idea of Jean and Beast hooking up, if only because Jean’s already gone from Cyclops to Wolverine in this series, so giving her yet another love interest makes her look kind of awful.  Also, it feels like change for change’s sake; I’d much rather see how Claremont handles Beast’s established relationship with Trish Tilby instead of charging off into left-field with this.  Nightcrawler’s subplot is a welcome reminder of Amanda Sefton, even though I believe that’s a red herring.  Ideally, Claremont should be spending more time with obscure characters like Amanda in this book, but it’s my understanding that Marvel wanted him to stick with one established cast and not stray too far.  The Daisy/Sabretooth plot is inoffensive enough, and Claremont thankfully isn't treating SHIELD corruption as casually as most writers do.  The Cyclops page seems to exist to establish that little Nate resents the X-Men for taking his dad away from him, which is a valid complaint.  And the Wakanda page is so vague I would argue it doesn’t deserve to be here.  At the minimum, it merits a few panels but not an entire page in such a packed issue.  There’s obviously a lot going on, which makes all of those werewolves pages even more frustrating.
Posted by G. Kendall at 6:00 AM