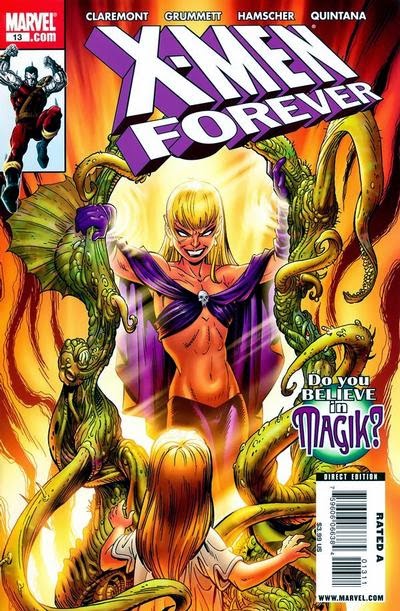 Summary:  As Black Magik turns off Shadowcat’s phasing power, Cossack’s Tartar Soldiers emerge from hiding.  They transform into wolf-creatures and attack.  While Colossus, Gambit, and Black Widow face the Tartars, Black Magik ambushes ‘Ro and Shadowcat.  Black Magik casts a spell and Shadowcat is soon possessed.  At the mansion, Beast and Jean share a dance, but she quickly regrets it, Xavier and Moira brief Fury on Burnout, and Sabretooth kills a Consortium agent that’s infiltrated SHIELD.  Daisy Dugan catches Sabretooth, but he talks her into joining with him to investigate the Consortium.

Continuity Notes:  According to Xavier, only eight X-Men will remain active.  The rest will be “shepherded by Archangel, (and) will keep the lowest of profiles.”  The eight active X-Men are presumably Beast, Jean Grey, Nightcrawler, Gambit, Shadowcat, Rogue, ‘Ro (even though she’s still young and her powers are unreliable), and…Sabretooth?  Unless Xavier was referring to himself, this is a pretty blasé way to announce Sabretooth has joined the team.

Review:  For twenty years now, fans have made a game of sifting through Chris Claremont’s stories and marking every repeating plot element they find.  X-Men Forever seemed to avoid this criticism in the early months, but it’s thirteen issues in and we’re back to mind control.  (And bondage imagery, with young ‘Ro bound and declared the next to be corrupted.)  I don’t have a problem with mind control occasionally appearing in Claremont’s stories, but it seems like an unambitious direction to take this story.  If Magik is back, and evil, I want to see Limbo again.  That’s a corner of the X-Universe that was largely ignored in the ‘90s, and it could be fun to see what happens to the current versions of Shadowcat and Storm if they were to return.  If Claremont were so determined to give Shadowcat one of Wolverine’s claws, she could even get the one S’ym once used as a toothpick in Limbo.  Instead, we’re teased with the threat that Shadowcat is going to turn evil, which even in the Forever universe, just doesn’t seem likely.  We’ve already been lead to believe that Storm’s evil now, anyway.

Thankfully, the issue is almost evenly split between the Black Magik story and the myriad subplots occurring at the mansion.  I’m not thrilled with another scene teasing a potential Beast/Jean romance, but I can’t deny that Tom Grummett makes those characters look fantastic, so these pages aren’t a total loss.  Xavier and Moira seem to be addressing even more of the readers’ concerns, as we finally have some idea of what’s happening with the rest of the X-Men.  The idea that Archangel would be the leader of this underground team of X-Men seems strange at first, but Claremont did go out of his way to write Archangel with his pre-Apocalypse persona back in Forever #10.  It’s possible that there is a story behind the reversion of his skin color and personality.  Claremont never gets to it, but it feels more like an intentional plot point and not a continuity screw-up now.  And while the Sabretooth subplot involves one of my least favorite chestnuts -- corruption within SHIELD (just how incompetent is their HR department?) -- it’s actually a decent use of the character.  Sabretooth needs to be causing some trouble at the mansion, and it can’t be anything so egregious that he would be sent to the Vault, so this is a decent compromise.  The liberal use of subplots is one of my favorite aspects of the book, and it’s especially handy in a “middle” chapter that doesn’t advance the main story very far.
Posted by G. Kendall at 10:00 AM

I assume Xavier's declaration about paring the team down is another instance of Claremont responding to online criticism, because otherwise you'd think he might've mentioned this much, much earlier.