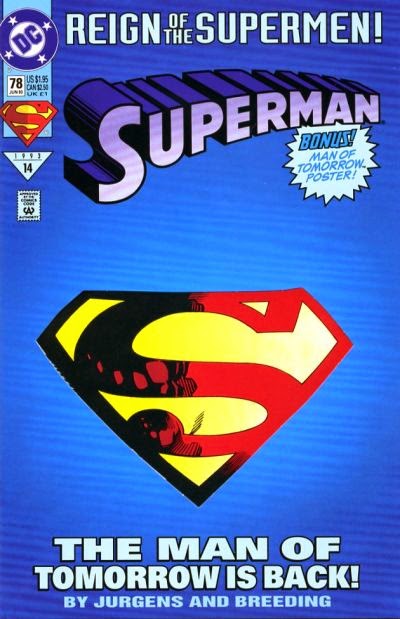 Alive
Credits:  Dan Jurgens (story and art), Brett Breeding (finishes), John Costanza (letterer), Glenn Whitmore (colorist)
Summary:  Cyborg Superman rescues a group of scientists at LexCorp from a nuclear accident before he begins his quest to find Doomsday’s body.  He battles Project: Cadmus’ guards and retrieves Doomsday from their underground lab.  In orbit, he ties Doomsday to an asteroid and hurls him deep into the void of space.  Back on Earth, Cyborg Superman meets Lois Lane and explains to her that most of his memories are gone.  She takes him to Professor Hamilton, who confirms that his metal is Kryptonian and his DNA matches Superman’s.  In deep space, Doomsday awakens and laughs.
Irrelevant Continuity:  Dr. Meyer from LexCorp met Superman back in Superman #51.  Later, Professor Hamilton says that he has experience with Kryptonian technology because he examined “that Kryptonian artifact,” the Eradicator.

Review:  It was an inevitable that one of the early ‘90s reinventions of Superman would turn out to be a cyborg, right?  He’s even got that half-robot face from Terminator 2, which was still all the rage in 1993, I guess.  If we’re to believe that Sunglasses Superman is the true Superman based on what we see with our own eyes, this issue uses a series of off-panel tests to prove that Cyborg Superman is the real McCoy.  It’s hard to imagine anyone thought that this was a more convincing method than providing the reader with a first-hand account, as seen in Action, but it’s all irrelevant anyway.  None of these guys are real, and the two most likely to be the authentic Superman turn out to be villains.  (The other two get spinoffs because, hey, it’s the ‘90s.)
Cyborg Superman doesn’t exhibit much of a personality at this point, but his single-minded determination to deal with Doomsday once and for all is a nice excuse for an action-heavy issue.  Jurgens and Breeding do an excellent job with all of the big action pieces, creating very clean images that evoke a mix of classic John Byrne and the bombast of the more competent early Image material.  I don’t think the design of Cyborg Superman has aged particularly well, but I think his look was always intentionally derivative anyway.  If the kids wanted to see Superman as a cyborg because cyborgs were hot, there he is.  He could’ve just as easily been Ninja Superman, but they went for Cyborg instead.  Were this published a few years later, he’d probably be Mecha Superman.  The design might seem dated now, but it doesn’t drag down the overall look of the issue.  Superman always looks exceptionally polished under this creative team, so even when the lead character turns into a T2 riff, the book is still visually attractive.
Posted by G. Kendall at 10:00 AM