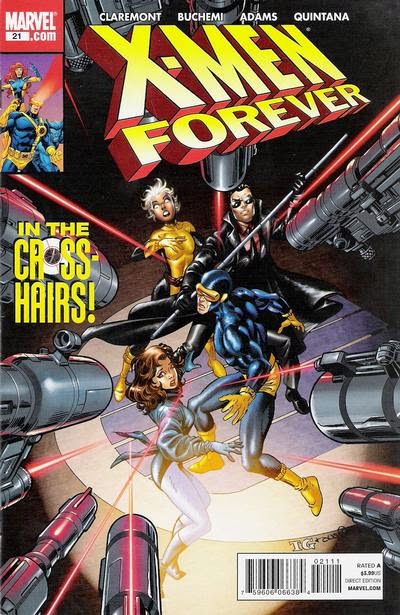 A Plague on Both Your Houses! - Into That Good Night (Part 1)
Credits:  Chris Claremont (writer), Rodney Buchemi (pencils), Greg Adams (inks), Wilfredo Quintana (colors), Tom Orzechowski (letters)
Summary:  Amelia Trask locates her daughter Ziggy in the Andes, discovering that Ziggy is now armored, leading a class of Neo-Sentinels.  Elsewhere, Daisy watches over the recuperating Sabretooth, while the X-Men investigate Tony Stark’s possible involvement with the Consortium.  Shadowcat discovers his father, Howard Stark, was friends with Bolivar Trask, creator of the Sentinels.  Later, Nick Fury conveys rumors of a “Plague-X” that will destroy all mutants.  Beast deduces that the Consortium has developed a giant gun that will fire from an orbital platform.  The blast will inflict Burnout on all mutants.  On the platform, Tony Stark is stunned when Amelia and Ziggy Trask arrive.
Continuity Notes:
Miscellaneous Note:  The title of this arc is a reference to the Dylan Thomas poem.
Review:  At some point, a decision was made for X-Men Forever to run in “seasons.”  The end of the first year of the book would be the end of the first volume, paving the way for a new number one for X-Men Forever 2.  I’m not sure how long that plan was in the works, but it’s obvious now that Claremont’s setting the stage for some sort of conclusion in issue #24.  The multitude of subplots has been pushed to the background as the team finally makes real progress investigating the Consortium, and by extension, Burnout.  While the cover might lead you to believe the X-Men actually have some sort of adventure this issue, their time is instead spent researching in their library or absorbing Beast’s exposition in his lab.  The only action comes on the second page, when Ziggy Trask inexplicably has her Neo-Sentinels attack a squad of Consortium agents.  Visually, the issue is criminally dull.  Guest artist Rodney Buchemi isn’t necessarily terrible, his only real flaw would seem to be his tendency to draw very drab female faces, but there’s only so much any artist can do with this material.
At the very least, the pacing continues to pick up.  There are fewer mysteries being introduced and more of an effort to clarify some of the insanity seen in the previous issues.  The Rogue/Nightcrawler power swap finally has some justification, even though it all boils down to the same casual explanation given for Kitty’s claw -- Fabian Cortez did it.  Tony Stark is shown to be uncomfortable around other Consortium members, and even plotting a total coup when he briefly thinks Amelia Trask has vanished in the Andes.  Claremont’s not confirming yet that Tony is innocent, but he’s already planting the seeds for the reveal.  (By the way, I wonder now if introducing Howard Stark into the plot was an intentional tie-in with Iron Man 2, which has been promoted heavily in almost every ad for the past few issues, or just a coincidence.)  The Beast, as a fellow Avenger and friend of Tony’s, questions how to reconcile Jean’s mental scan of Cortez’s final thoughts with his own past with Tony.  This could’ve been an excellent opportunity for some Claremontian introspection and melodrama, but instead it’s all very clinical.  Claremont’s truly in the mode of Getting the Job Done, so virtually the entire issue is dedicated to advancing the Consortium plot.
And now that we finally know what the Consortium’s plan is, there is a sense that many of those early hints are being paid off.  Claremont’s oddly detailed about every aspect of the Consortium’s plan this issue, with the exception of how exactly Cortez’s power can be translated into a laser blast.  A glaring omission, I would say.  I wonder now if this was a detail he was planning to work out later but never had the opportunity to, so he has to fudge it now.  Regardless, the basic idea makes a certain amount of comic book sense.  Fabian Cortez can accelerate a mutant’s power to the point that it kills him.  The Consortium wants all mutants dead, so they studied Cortez and discovered a way to mimic his powers.  Rather than reaching each mutant individually, they’re going to shoot a beam at the Earth and let the Earth’s rotation take care of the rest.  This still doesn’t answer the question of why so many mutants of different ages suddenly developed Burnout in the opening issues, but the main scheme feels consistent with the hints Claremont’s been dropping.

The book’s not totally through with bizarre plot developments, though, as Claremont introduces a potential romance between Dum Dum Dugan’s granddaughter and Sabretooth this issue.  Even if you accept the premise that the “real” Sabretooth has rarely appeared in this continuity, does anyone want to read a romantic subplot featuring him?
Posted by G. Kendall at 12:30 PM