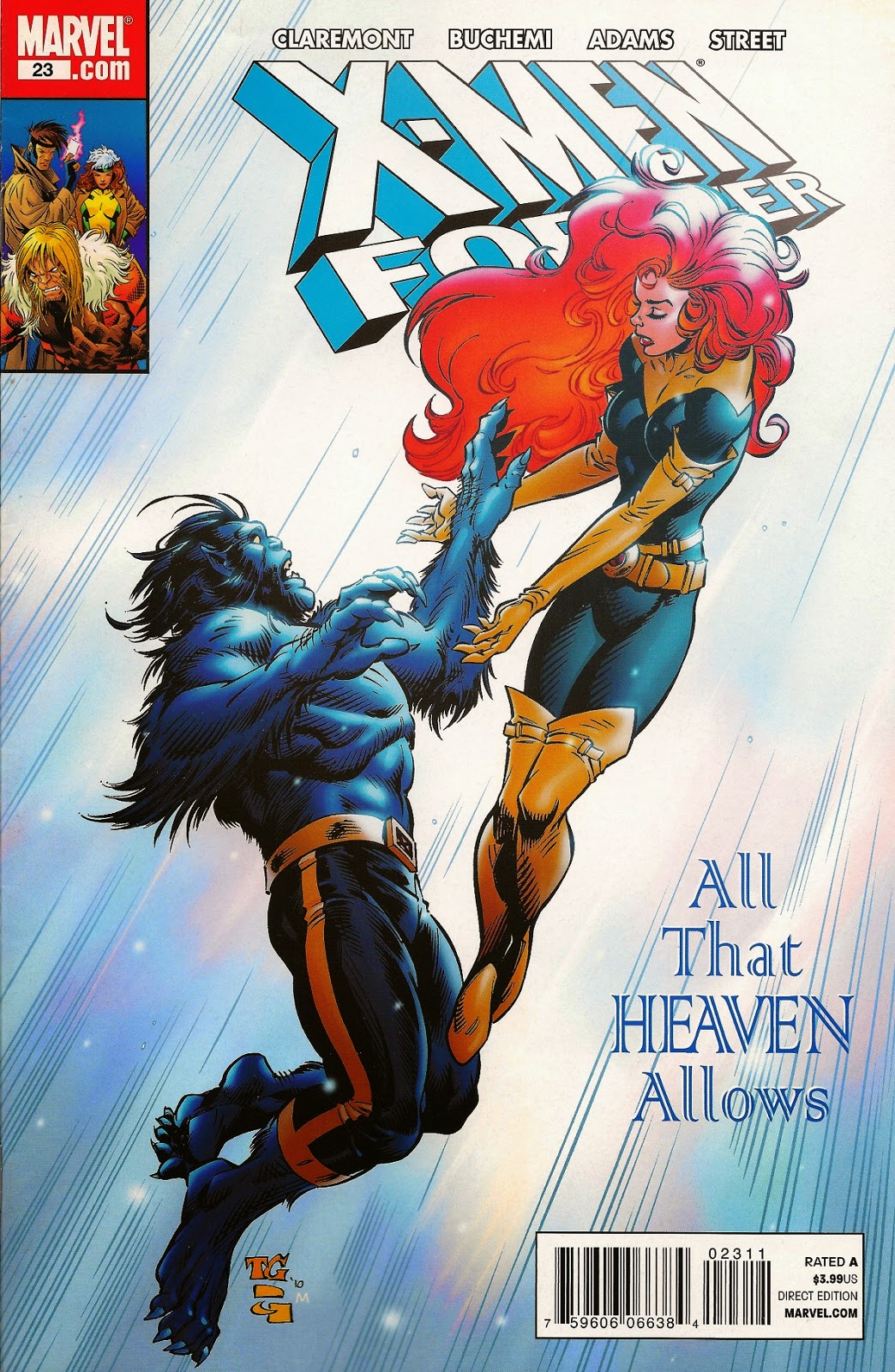 Do Not Go Gentle Into That Good Night (Part 3)
Credits:  Chris Claremont (writer), Rodney Buchemi (pencils), Greg Adams (inks), Sotocolor’s A. Street (colors), Tom Orzechowski (letters)
Summary:  Jean gives Beast a kiss goodbye and reunites with the X-Men.  They leave the space station before it explodes, but are attacked again by Ziggy Trask and her Neo-Sentinels in space.  Meanwhile, Tony Stark recovers and shoots Amelia Trask in the chest.  He telecommutes with Nick Fury and Beast, giving them information needed to stop the Neo-Sentinels and the Plague-X generator.  Cyclops blasts Ziggy into the station as it explodes.  The Neo-Sentinels are defeated, but the team receives word that both Beast and Tony died in the explosion.
Continuity Notes:  Tony Stark is revealed as Nick Fury’s mole within the Consortium.
Review:  We are now very firmly into What If…? territory.  Not only is Beast killed, less than a year after Wolverine’s death, but Tony Stark is rather casually whacked as well.  There’s absolutely no pretense that this is what would’ve happened if Claremont had continued his original X-Men run, but even judging the story on its own merits, it’s hard to deny that this is rushed and lacking the appropriate sense of drama.  Some of the blame lies in the art, which is almost lifeless, but the story also doesn’t seem to be taking these massive events very seriously either.  All of the poetry and baroque prose you might expect from a Claremont death story has been replaced with rather matter-of-fact dialogue exchanges.  There’s no deeper sentiment than Jean and Beast exchanging a blunt “I love you” shortly before his death.  Jean has a very brief monologue that has her questioning why she’s unable to save the men she loves, but other than this one panel, she seems fairly emotionless throughout the issue.  Perhaps I’m biased because I always felt the Jean/Beast romance was a bad idea, but at no point in the issue did I get the sense that I’m reading some great tragedy.
Not only does the issue fail as a goodbye to Beast, but you also have to wonder what on earth Tony Stark has been doing in this story.  No part of his involvement holds up to any scrutiny:  Why did he wait so long to act against the Consortium?  Why was Nick Fury unable to do anything against the Consortium, even with Tony acting as his mole?  Why did Fury keep Tony’s identity a secret, even when he knew the X-Men were wasting time investigating Tony’s connection to the Consortium?  Another annoyance is the casual way heroes are killing of villains this issue, with both Tony Stark and Cyclops offing the Trasks with no moral dilemma whatsoever.  There was a “heroes don’t kill” speech as recently as last issue, as I recall, and now that’s been forgotten like it’s nothing.  I’m not adamantly opposed to ever having the heroes kill (and I seem to recall both Trasks miraculously pulling through), but the story needs to build up the proper stakes to justify it.  Claremont’s obviously trying to craft a story with the ultimate stakes, but the sense of drama never properly develops.  Again, it feels as if you’re reading a random issue of What If…? and you’re stuck in one of those “And then…everyone died!” montages.
The Shape of Things to Come
Credits:  Chris Claremont (writer), Fernando Blanco (art), Sotocolor (colors), Tom Orzechowski (letters)
Summary:  The Warskrulls lead a successful attack against a Shi’ar base. The Shi’ar investigate and discover that the Warskrulls gained access to their files because Xavier did not secure the datanets he studied.  A Shi’ar admiral declares that Xavier will pay.
Review:  This back-up is a prelude to the upcoming Giant Size X-Men Forever special, which will serve as yet another vehicle for writing Xavier out of the book.  There’s not enough of a plot here to pass a real judgment, but it’s refreshing to see Claremont back away from modern decompressed storytelling and actually use five pages to his advantage.  The pacing here is much closer to what you’d expect from a traditional Claremont story.  Fernando Blanco’s art is a noticeable improvement over the pencils and inks in the main story, evoking a slightly darker Clayton Henry, making me wonder why he didn’t do more work for this series.
Posted by G. Kendall at 12:30 PM

Interesting that they also offed Beast off in the Ultimate universe...sensing a pattern here?

(And yes, I know Loeb wiped out 1/2 the mutants later, but you know what I mean).

Also...the Warskrulls? Dang, Claremont really was the only person ever interested in using them.

Hypothetically, the introduction of the Warskrulls should've had a larger impact on the Marvel Universe. Weren't the Skrulls often foiled because of their inability to mimic actual powers? Introducing Skrulls with powers should make them much more formidable threats, but it seems like they were forgotten as soon as they were introduced.

Yup, this is basically where the series lost me. Kill off Wolverine to launch the series, fine. Not something Claremont would ever have been allowed to do in 1991, but a compelling hook to kick things off. But from there, the contiuity glitches, costume changes, power swaps, ill-conceived team additions/subtractions and romances, and now this, just kept piling up and proved to be too much.

Claremont could have gotten away with killing Beast in '91/92, I'm sure of that. He might have been allowed to kill Black Panther, if he still had the clout to pull it off, though I certainly have my doubts there. But no way would Marvel have allowed him to kill Tony Stark, a character who headlined both his own self-titled series and AVENGERS WEST COAST. By this point, in case it wasn't abundantly clear from past installments, this series has completely abandanoned even any pretense at following its supposed premise.

What's frustrating is that it seems Claremont was under extreme editorial scrutiny on this series, but not in the right way. They limited his team roster and forced him into a more modern storytelling style, when they should have been letting him do it however he wanted, but not allowing him to do whatever he wanted. He needed a strong hand to tell him "Marvel in 1991 wouldn't have let you do this, so we won't either" in order to play fair with readers. The editorial influence was exerted in the wrong ways.

I wanted to like X-MEN FOREVER, and I kept trying to, but after this issue, I just couldn't even make that attempt anymore. I continued to read it, picking up volume 2 more in hopes that other, better-conceived FOREVER series might materialize if I supported this one, than out of any enjoyment of the material (though I do recall there were a few bits and pieces I liked in the second series). But really, it was here I finally checked out for good.

P.S.: The best "FOREVER" series I've read, still going to this day, is Larry Hama's continuation of the original G.I. JOE comic. It started about a year later, and Hama has been doing what Claremont should have done: he's just telling good, fun stories about the characters we grew up with, without trying to revamp every possible little thing as he goes along. And, unlike X-MEN FOREVER, JOE has a strong regular art team, to boot!

(I love Tom Grummett, and he was ostensibly X-MEN FOREVER's regular artist, but in all, he penciled fewer than half both series' combined run.)

P.P.S.: It would absolutely never happen, but I would love to see IDW, with their apparently good working relationship with Marvel, license the characters for their own small line of "retro" Marvel series. Claremont on X-Men, Stern on Avengers or Spider-Man, Simonson on Thor, stuff like that. Maybe even Byrne on FF, since he works at IDW these days. A small shared universe of maybe six titles. Let the creators do "FOREVER" style series outside of current Marvel's control and see what happens.

But obviously that's completely unfeasible for any number of reasons. I can dream, though...

Hama's G. I. JOE is pretty much the only monthly I follow anymore. The fact that the same writer is still building on the continuity he began in 1982 really is an incredible feat. I wish Claremont could've done something closer to what Hama's doing. And I wouldn't have minded seeing the aborted stories Claremont already spoiled in interviews in the '90s.

Absolutely; I would have been happy if he'd just gone ahead with all his old plans, even though we know what lots of them were, and in some cases, such as Mark Millar's "Enemy of the State", they eventually happened in altered/truncated forms. That's basically what I thought this series was going to be when it was announced!

I read Hama's JOE up to #200 in single issues, then finally decided to start trade-waiting on it. But I didn't realize those trades are so skinny, collecting something like five issues each. I haven't bought any yet. I kind of just want to go back and grab the issues I've missed and keep reading it in single monthlies.