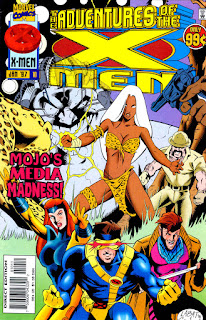 Media Darlings
Credits:  Ralph Macchio (writer), Yancey Labat (penciler), Ralph Cabera (inks), Paul Becton w/Graphic Colorworks (colors), Michael Higgins (letters)
Summary:  Storm films a pilot episode for Mojo, but the filming is interrupted by aspiring screenwriter Vroot.  Meanwhile, the Vanisher teleports the X-Men to the Mojoverse.  They quickly encounter Longshot, who is leading a rebellion against Mojo.  With his help, the Vanisher discovers Storm’s location.  The X-Men free her from Mojo’s guards and soon confront Mojo, who’s building a tower to reach Earth’s satellite transmissions.  Mojo’s device doesn’t work, thanks to Vroot, who’s been secretly working with the rebellion.  His plan is foiled, but Mojo demands Storm honor her contract.  The Vanisher volunteers to take her place; he needs to hide from Sebastian Shaw, and he’s always wanted to be an actor anyway.  Mojo agrees and Vanisher sends the X-Men home. 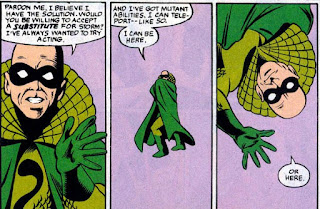 Continuity Notes:
I Love the ‘90s:  Vroot’s pitch to Mojo for a new series: “We start off with a young twenty-ish C.E.O. -- already we nailed the Generation Xers!  He’s a shallow little cretin who says ‘way cool’ ‘til even his mother wants to strangle him!  Now we caught the Grunge audience -- and the seniors!”
“Huh?” Moment:  Not only do Longshot’s luck powers enable him to automatically know where Storm’s being held captive, but simply holding hands with the Vanisher enables him to subconsciously pass the information along.

Review:  Well, the Mojo scenes aren’t funny and the TV parodies are tedious and years out-of-date.  I’m stunned.  I will say that Macchio has a better handle on Storm than I would’ve guessed, with only a few ridiculous lines that no human would ever speak (“I despise what I have been forced to become!”)  And thankfully, Macchio seems to be tired of media parodies by the time the X-Men arrive, so the second half of the issue is a fairly standard rescue mission and not a play on Bewitched or something.  Even the obnoxious Vroot is given some justification for existing in the final act, although it’s hard to excuse how much of a nuisance he’s been so far.

Probably the most painful moment of the issue is when Longshot is thrown into the plot, since there’s apparently some law that says he must appear in every Mojo story.  Macchio demonstrates yet again that he’s a little fuzzy on how these X-Men’s powers work, so the reader is left with a torturous scene that has Longshot suddenly developing telepathic abilities.  You know who does have telepathic powers and is standing right next to Longshot?  Her name is Jean Grey and she has absolutely nothing to do in this story, so perhaps this moment should’ve gone to her.  Just a suggestion.  Still, it’s not a terrible issue, and I have to give Macchio credit for using the Vanisher creatively throughout the storyline.  Considering how badly a Mojoverse story can go off the rails, this is surprisingly tolerable.
Posted by G. Kendall at 7:30 AM