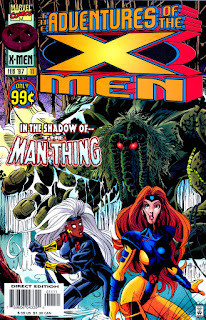 Tower of Despair
Credits:  Ralph Macchio (writer), Yancey Labat (penciler), Ralph Cabrera (inks), Paul Becton w/World Color (colors), Michael Higgins (letters)
Summary:  The Vanisher’s attempt to send the X-Men back to Earth doesn’t go as planned, with Cyclops and Gambit arriving in New York but Storm and Jean Grey materializing in a Florida swamp.  Inside the swamp, the duo discovers Man-Thing, a creature with a strange affinity for Jean Grey.  Going into town, they encounter the charismatic Godfrey Silverton, who leads the townspeople to a tower where he claims their dreams will be fulfilled.  Silverton then reveals himself as D’Spayre, and Jean quickly realizes that the tower is connected to the Nexus of Realities.  Storm destroys the tower while Jean faces D’Spayre in the Astral Plane.  Jean discovers he’s working for the Dweller in Darkness, and with Man-Thing’s help, forces D’Spayre to retreat.  At the mansion, Lilandra contacts Xavier, revealing that the M’Kraan Crystal is unstable and getting worse following the battle at the Nexus of Realities. 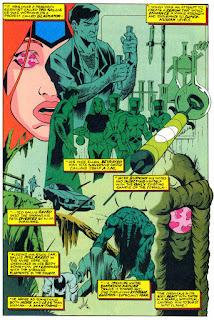 Miscellaneous Note:  This issue and the next feature an episode guide of the animated series, written by Andy Mangels.
“Um, Actually…”:  The script leaves the “All” out of “Nexus of All Realities.”  Also, the story claims at one point that the tower actually is the Nexus, which doesn’t sound right. 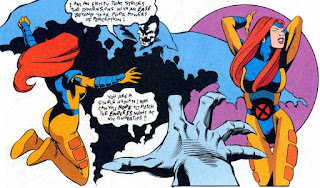 Review:  Adventures of the X-Men is one issue away from cancellation, and it looks as if Ralph Macchio is tying together various stories from previous issues and going for a cosmic sendoff.  Even though the word “Adventures” became synonymous with “done-in-one, continuity-free” storytelling in the ‘90s, an accurate adaptation of the X-Men animated series actually would feature continued storylines, so I’m okay with Macchio going in this direction for the final issues.  Yancey Labat returns as artist, in this title that has yet to find anyone willing to stick around for more than a few issues.  Unlike the previous pencilers, there’s no pretense that Labat is drawing in the conventional “Adventures” style, which means his work looks like almost any other comic Marvel published circa 1996.  On a few pages he manages to channel early Terry Dodson fairly well, but much of the issue is plagued by disappearing backgrounds and cluttered storytelling.
I guess even the Adventures books couldn’t avoid Marvel’s Bronze Age Revival in the mid-‘90s, which is the only justification I can come up with for dedicating this issue to the Man-Thing, D’Spayre, and the Nexus of (All) Realities.  I’m not carrying any ‘70s nostalgia into this comic with me, so much like the revivals of Shang-Chi and the Micronauts, I just kind of shrug my shoulders and move on.  There’s nothing terrible about the script, aside from a few lines of clunky dialogue, but it’s hard to find a reason to care about Storm and Jean getting dropped into a tame recreation of an old Steve Gerber comic.  The prospect of the Nexus of Realities having an impact on the M’Kraan Crystal actually isn’t a bad idea, however, so maybe there will be a smooth transition into next issue’s finale.
Posted by G. Kendall at 10:00 AM