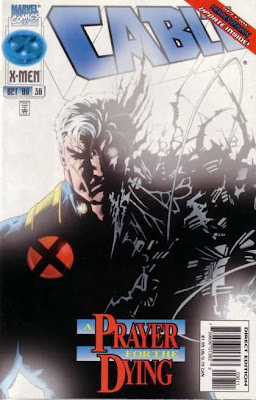 Summary: In the aftermath of the Onslaught battle, Cable’s techno-organic virus has again consumed his body. Nathaniel Richards, the scientist father of Mr. Fantastic, tries to save his life. Cannonball, Domino, Storm, Caliban, and Franklin Richards watch anxiously as Cable’s condition deteriorates. Franklin declares that he will help Cable, and soon Cable’s astral form is reunited with his son Tyler. Tyler relieves Cable of his guilt over his death, and encourages him to pursue his destiny. After Nathaniel Richards gives Cable minutes to live, Franklin begins to cry. Cable’s spirit is then reunited with his late wife, Aliya. She encourages him to keep fighting before saying goodbye. In reality, Cable awakens and suppresses the virus, returning his body back to normal. Cable wonders if it was Franklin, or his internal resolution that saved him.

Continuity Notes: Cannonball refers to Tyler as Cable’s adopted son, which confirms what had been long implied. I assume that Tyler wasn’t made a blood relative because Marvel didn’t want such a minor character to have the all-important Summers genes. According to this issue, Cable named him Tyler, so he presumably knew him at a young age.

Review: This resolves the “Cable’s virus is out of control” storyline that had been running since the X-Man crossover. I never cared for the idea that Cable has to fight to keep the virus in check, mainly because the only drama it leads to usually involves Cable concentrating really hard and making pained faces. I understand that the virus exists in part to keep Cable’s powers at a reasonable level, but that doesn’t mean that stories about the virus itself are inherently interesting. This specific story tries to get around the “Cable tries really hard” resolution to his infection. Loeb instead goes with the inspirational dream route, as Cable is reunited with his late wife and son. Their conversations are a little cliché, but the sappiness is at least bearable. I believe this is the first time Tyler’s been presented in a sympathetic light, which is amusing since he’s already been killed off at this point.

In retrospect, it’s strange that Marvel kept pushing these retconned aspects of Cable, even as his popularity continued to dwindle. Cable was initially a mysterious mutant with scarcely any powers who had to rely on guns to survive. Now he’s potentially the most powerful mutant on Earth, who has to fight a science fiction disease while fulfilling the destiny given to him by a quasi-religious order in the future. I personally find Cable’s characterization more tolerable during this period, but he’s clearly had a lot grafted on to him, and later writers have struggled with how to deal with it.

I liked the scenes between Cable, Tyler, and Jenskot. Sappy, yes, but it was upbeat and closure in a good way, as opposed to the near non-stop doom and gloom we'd seen in the X-books over the last few years. Then again, I also really thought it was a good looking issue - I always thought Bernard Chang did a great job with this issue (what's he up to these days?) - and maybe the art is clouding my judegement...but yeah, the Cable virus stuff is kind of lame. And wasn't this the last issue Loeb tried to push the Storm/Cable/Domino triangle?