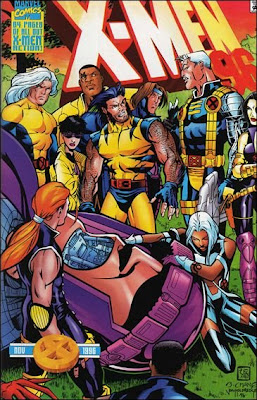 Summary: X-Force, Generation X, and the X-Men gather for an afternoon at the mansion. Their baseball game is interrupted by the arrival of a malfunctioning Sentinel. The teams unite and attack it, forcing the robot to fall on a series of power lines. The Sentinel screams in pain, which stuns the mutants. The dying Sentinel explains that it was created as an intelligence gatherer, and not a hunter/killer. When it was awakened by Onslaught, its super-computer began to develop a consciousness. After learning of Xavier’s surrender to the authorities, it came to warn the X-Men of the future it’s predicted. As the Sentinel dies, the assorted teams debate the merits of shooting it down. Caliban’s naive words calm everyone down, and they continue their party. That night, Cable and Phoenix unite their powers to give everyone a superficial mind-meld that bonds the teams.

I Love the ‘90s: The Bullpen Bulletins page is bragging about Marvel going online for the first time. Their official site is actually www.onslaught.com, and exclusive content is also available through AOL with the keyword “Marvel”. Remember the days when having your own section of AOL was the equivalent of having an official site?

Review: Combine a quiet post-crossover issue with typical annual filler, and this is what you get. The X-Men have fun, get bummed out by a Sentinel, then have some more fun. To close things out, they hold hands and feel good next to each other. The extremely cartoony art livens things up a bit, but nothing can disguise the dullness of the story. I have no idea what the point of the Sentinel’s appearance is supposed to be, since the X-Men forget about it very quickly and go back to their party. I reread the Sentinel’s dialogue several times, trying to decipher what exactly it’s supposed to be warning the X-Men about, but it’s too cryptic to tell. Apparently, it’s extrapolated that something horrible will happen now that Xavier’s in custody, but that’s a fairly generous reading on my part. The rest of the issue just touches base on some of the various character relationships of the time, without actually doing anything with them. Gambit is resentful of Joseph. Joseph flirts with Rogue. M acts snotty towards everyone. Everyone goofs on Cannonball. All of the scenes feel shallow, except for the brief scene that has Wolverine apologizing to Cable about his son’s death. Everything else in this issue is pretty bland.

Possibly the nadir of 90's X-Men. But then I remember how awful the lead up clues to Onslaught were and the embarrassingly bad X-Men#48-49 and realize that is just dull and those are offensively bad and poorly edited. Still, it's too bad there wasn't more fun or worthwhile interactions with all of the X-characters.

Probably the worst issue of an X-men comics I have read in my life. EVER! At least to my rememberance. And I'v read X-men comics from the 60's. Every comics has some reediming quality you can find in it if you look really hard... But this one... Harry Lama should be ashamed he got his name on this monstrosity. He got most the the characters wrong. I mean, sure, you cannot give each character right on an issue with more then 30 characters in it (!) but that couldn't be a reason for practicly destroy or ignore their set personality. Everyone's text is aweful. Even Wolverine, and he's Hama speciality for god sake. The dialogue isn't even shallow. It's just plain stupid. The first page left me in owe, when seven differenet character had to say some dum one liner that sounds like it's taken from a bad children anime. Then it got worse.

And the art... Oh man... That's the artist from X-Man, right? He is bad... In so many levels. The proportions, the eyes, those emaciated pointy weird limbs and facials.
Even the inkers defined a new level of sloppyness, when they changed everyone shirts colors almost in each frame and got Syrin's hair totally wrong!