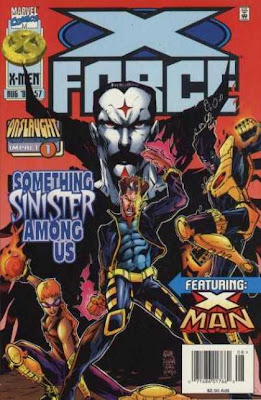 Summary: After Mr. Sinister’s assault on X-Man and X-Force, only Domino and Caliban are left standing. Caliban, whose strength is suddenly enhanced, violently attacks Sinister. Domino enacts the armory’s self-destruct sequence, destroying part of the mansion, and leads the team away from Sinister. Caliban and Meltdown are separated from the others in the tunnels beneath the mansion. Meltdown comforts Caliban, who is distraught over his sudden bloodlust. Meanwhile, X-Man reveals to Domino that Sinister shut his powers off. He uses what’s left of his powers to enter Sunspot’s mind, hoping that the Askani teaching he absorbed from Cable can undo Sinister’s damage. A mental image of Blaquesmith suddenly appears, and the duo is knocked unconscious. Sinister soon attacks the rest of the team, as Warpath and Risque arrive to help. X-Man regains consciousness and attacks Sinister. Sinister convinces him to enter his mind and see that his motives for stopping Apocalypse are legitimate. X-Man falls for the trap, and Sinister refocuses his telepathy to attack the team. With X-Force defeated, Sinister leaves with X-Man.

Sinister speculates that Caliban’s suddenly enhanced strength is due to a failsafe implanted in him by Apocalypse. Apocalypse genetically altered Caliban back in the early issues of X-Factor.

How exactly Sinister shut off X-Man’s powers is left vague. Sunspot assumes that Sinister hasn’t done this to Cable because of his techno-organic virus (which is a strange explanation), while Domino claims that Cable’s Askani teachings protect him.

Risque mentally refers to Sinister as one of the “legendary ones”, and says that she didn’t expect to meet any of them so soon. Sinister doesn’t recognize her and is surprised that there is a mutant he’s never heard of. I don’t know if any backstory was ever given on Risque, but it almost seems as if Loeb was setting her up to be another time-travelling character.

Review: After an entire issue of fight scenes and explosions, the story’s exactly where it was at the end of the previous chapter. Loeb, to his credit, is able to throw enough things into the mix to prevent the issue from feeling like a total waste of time, but it’s hard not to notice that the story’s going in circles. Revealing that Apocalypse implanted an anti-Sinister failsafe in Caliban years earlier is a smart use of past continuity, connecting Apocalypse’s earliest appearances (before Sinister was even created, let alone retconned into being one of his fiercest enemies) with the more recent revelations about the character. Loeb also uses the scene to create a character moment between Caliban and Meltdown, who is beginning to drop her rough facade. It feels a little forced, but it is nice that some of the ongoing character arcs haven’t been forgotten during the crossover. The fill-in art comes from Anthony Castrillo, who spends much of the issue doing a pretty blatant John Byrne imitation. Some of the pages look like average, acceptable superhero art, while others are just cramped and awkward. It looks like Castrillo is trying to combine Byrne with the manga style that was getting popular at the time, and the results are inconsistent at best.

Pollina begins an extended leave to do an Apocalypse mini with this one - and I've always felt the whole title (art and story) went on autopilot (with the Shatterstar origin issues being outright bad) just because its artist took a break from the book. Which is a shame. Thankfully, when he returns, John Francis Moore has taken over as writer and it becomes a great book.

I think Risque was supposed to be a character from the future, but noone ever got around to using her for that. I think JFM does give her an origin later on, which does not entail her being from the future. She appears on and off for a few more years in this title, then disappears, then Grant Morrison kills her (off-panel) during his run...so chalk it up as another dropped plot point (thought plot point is being generous; dropped throw away line, maybe?)