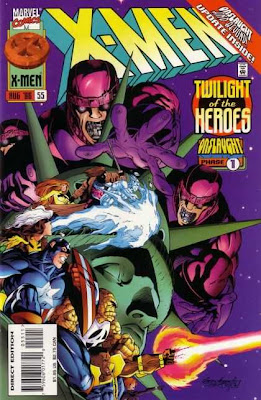 Summary: Onslaught’s Sentinels begin to invade New York, as the Avengers, Fantastic Four, and X-Men unite to formulate a plan. The Avengers arrive with Joseph and Rogue, as Mr. Fantastic explains that Onslaught has kidnapped his son and is planning to use his reality-bending powers. The teams split up to cover New York, while Mr. Fantastic takes Giant Man, Iron Man, and Bishop to his lab to create weapons to fight Onslaught. Meanwhile, Onslaught uses his young Charlie persona to try and deceive Franklin Richards into voluntarily joining him. As the heroes fight the Sentinels in New York, Gambit accuses Joseph of having a role in Onslaught’s creation. Their argument is interrupted by the appearance of a new citadel nearby. Onslaught emerges from the tower and sends an electromagnetic pulse, destroying buildings and killing electricity throughout the city. Mr. Fantastic’s work is destroyed, and the team of X-Men returning from Muir Island watch as the Xavier Protocols short out, and their jet loses power. Elsewhere, Ozymandias is horrified when he creates a statue of an even more gruesome Onslaught standing on the Earth’s ashes.

Review: We’re now at the “every hero teams up to fight” stage of the crossover. You’d think Andy Kubert drawing all of the Marvel heroes fighting Sentinels in Manhattan would’ve created a memorable issue, but unfortunately this one turns out to be pretty unremarkable. More time is spent on recapping other chapters of the crossover, and giving the heroes assignments that turn out to be futile, than on the action. Kubert does create some impressive drawings, especially the double-page spread of the heroes united on top of the FF’s headquarters, but he’s given surprisingly little to work with here. I might be too biased since I also dislike most of the Avengers’ outfits from this era and prefer Kubert’s previous inkers over Panosian, but I was expecting more from the artwork. Waid tries to inject some personality into the dialogue and give the narrative captions an epic feel, but most of the issue remains fairly dull. Giving Onslaught Magneto’s powers has always bugged me, too. Even if a part of Magneto lived in Xavier’s brain, that wouldn’t biologically give Xavier Magneto’s powers. It’s already a stretch to say that Onslaught can do things Xavier couldn’t because he’s “psionic energy” unleashed, but this is a harder sell.

Yeah, giving Onslaught Magneto's power (or some element of it) makes perfect sense until you think about it for more than one second.