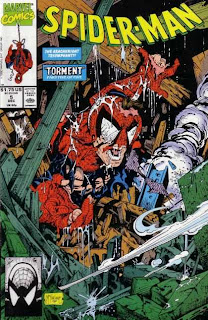 Summary: Rescue workers race to the scene of the explosion, narrowly avoiding an accident with Mary Jane’s taxi. Spider-Man, Lizard, and Calypso all avoid the brunt of the explosion and continue to fight. In desperation, Spider-Man throws metal chains around the Lizard, breaking his neck. Calypso decides to torment Spider-Man another day and forces the rest of the building to collapse. A bruised and battered Spider-Man finally returns home, unaware that the Lizard is still alive.

Panel Count: 80 panels this time. Another issue with a less than four panels-per-page average.

Where’s Felix? : Felix is seen on another ad on top of the second taxi MJ takes in this arc.

Review: Anytime an issue ends with a giant explosion, you know you’re in for a copout, but this is pretty egregious. Spider-Man was standing right in front of the gas line before it erupted last issue, and according to the narrative captions, he didn’t move because he knew he had no time. We now see a disheveled Spider-Man in the aftermath of the blast, so clearly it harmed him in some way, but unbelievably he’s not burned to a crisp. I felt cheated by this as a kid, too.

Up until the last two pages, the entire issue is supposed to take place in five minutes. I guess McFarlane knew how long it would take to actually read the story, so he went with a real-time gimmick. The stylization is supposed to make up for another weak plot, as McFarlane goes to town on the assorted debris, smoke, and fire. The first-person narrative captions are all over the page, drawn at strange angles, in an effort to simulate Spider-Man’s confusion, which is a very effective trick. Spider-Man’s costume is shown in the worst shape I think it’s ever been portrayed by this point (McFarlane believes Sam Raimi based Spider-Man’s look at the end of the first movie on this issue’s cover), which added to the novelty appeal to me as a kid. There is some attempt at characterization, as Spider-Man finally starts to get angry over what’s happened to him in the past few hours, and MJ starts to wonder if Peter always feels this anxious after her near car accident. (McFarlane’s gone out of his way to insert MJ into this story, in part because he probably enjoys drawing her, but this being the early years of the marriage, it was common in all of the books for several pages just to be devoted to MJ). The main story receives virtually no resolution, as the villain just throws up her arms and disappears under a pile of debris. If you have a Master’s Degree in Obscure Spider-Man Villains, you might recognize her as Calypso, but she’s never identified in the actual story, nor does Spidey recognize her (which probably fits with continuity, since I don't think the two characters had met face-to-face at this point).

I had mixed feelings about this book growing up. Initially, I hated McFarlane’s artwork because it looked so different from the standard Romita-style Spider-Man I saw everywhere else (it didn’t help that one of the first McFarlane covers I saw was the one with a highly distorted Spider-Man reflected in Mysterio’s bowl-head). I gradually started to get into Amazing Spider-Man through the initial Venom storylines, and found myself gravitating towards McFarlane’s imaginative page layouts and overall quirkiness. I also had never seen anyone ink like McFarlane, as every object seemed to have an odd texture and every page was covered in heavy, dark lines. By the time this new series was announced, I eagerly anticipated it for months. A lot of that had to do with being a naïve kid who bought into the hype, but I was still a genuine fan. Actually reading the series, I wondered why there were so many splash pages and giant panels, and why I was paying extra for a comic that was a much quicker read than the rest of Marvel’s line. The letters page ran letters from people openly mocking McFarlane’s writing ability, which is something I’d never seen Marvel do before. Yet, I faithfully purchased each issue. I wanted a McFarlane Spider-Man comic, and there it was every month. I’d never read such a dark series before, or a Spider-Man comic without subplots or a supporting cast. It felt more like a movie and less like a TV show, and I think I bought into the idea that it was more “artistic” than the rest of Marvel’s books. This specific issue was probably the biggest letdown of the entire run, as we were never even told the villain’s name, or given a motivation outside of the Kraven references. The next issue had Hobgoblin and Ghost Rider, though, so I couldn’t wait.

... So Spider-Man killed the Lizard? Or at least, thought he did? By breaking his neck?! And this got through editorial?!?

And somehow I doubt that the subsequent issues featured scenes of him angsting over the fact that he murdered a long-time friend and robbed Martha and Billy Connors of a husband and father, either. In fact, I wonder if he even bothered to go tell them what happened!

I always thought characters acting grossly against their established personas was something from the Quesada era, but it's interesting to see that it was happening as early as 1990!

Well, he didn't intentionally break the Lizard's neck. He threw the chains to stop the Lizard's advance and that's what happened.

I assume he learned that the Lizard was alive relatively quickly since there were no bodies in the debris. Plus, he accidentally impaled the Lizard in #2, and that didn't kill him either.

In issue #1 the Lizard is at the bottom of the East River. I don't think that actually matches up with the last story the Lizard was in. Does anyone know?

He last appeared as Curt Connors during "Inferno." He's emerging from the East River because Calypso is summoning him to New York (I think he went back to Florida after his last appearance).

So...bad. I mean, I guess we should be glad it's a "darker" Spider-man story, but it's such crap. Granted, I'm not the biggest fan of Mcfarlane's art, but his writing...ugh.