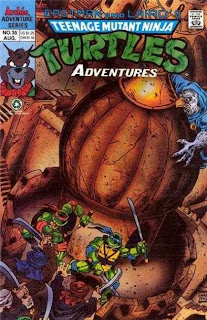 The Turtles and Ninjara continue to follow Splinter on their tour of Asia. Passing through Iran, they catch a boat to Oman, their next destination. After days of traveling through the desert, Splinter tells the story of the Black Stone of Mecca. The Black Stone, described as a meteor that fell to Earth three thousand years ago, is now a Muslim object of reverence. The “pre-Islamic Arabs of Mecca” built a cubic structure called the Ka’Ba to house the Black Stone, which became the center of worship for a pantheon of gods. Splinter then describes the history of Muhammad, the Koran, and Islam’s rise as the major religion in the area. For what it’s worth, the story of Muhammad is presented without skepticism, so Splinter doesn’t say that Muhammad believed that he was the messenger of God, he bluntly states that he was. So now, Shinto, Buddhism, and Islam are all in the running to be the official religion of Teenage Mutant Ninja Turtles Adventures.

Splinter wants to get close to Mecca to see the Ka’Ba, even though the city is closed off to non-Muslims. Ninjara asks if Splinter is familiar with the White Stone, the meteorite that arrived with the Black Stone and was allegedly stolen by a nomad soon after it landed. She claims that the White Stone has been sold amongst the world’s richest men for years, and that many attempts have been made to steal its mate, the Black Stone. I’m sure this will be important later.

The Turtles come across six men traveling through the desert. One of them thinks he recognizes Splinter through his robe, and quickly abandons his group to follow. The Turtles set up camp in an abandoned city outside of Mecca, where they hope to hide from an approaching sandstorm. Suddenly, they’re attacked by sword-wielding men in Arab garb. Michelangelo is struck from behind by a giant bird-man. He accuses the Turtles and friends of being the six robed men who stole the Black Stone. He declares his name is, I swear to you, Al’Falqa. 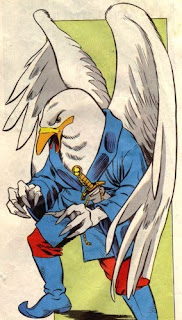 Splinter convinces Al’Falqa that they’re innocent, as the sandstorm blasts the city. Splinter isn’t able to take cover in time and succumbs to the sand. From a distance, the man following the Turtles watches with binoculars. He reveals himself as Shredder.

Review in a Half-Shell: This is mostly setup for a new storyline, but the story manages to work in a lot of action and more real world history and geography lessons. Clarrain/Murphy is really going into unexpected places for story ideas, which pulls the book even further away from its toy tie-in roots. Having the Turtles meet yet another anthropomorphic character in a foreign country is becoming pretty cliché at this point, though. I get that anthropomorphic characters are just a part of the TMNT canon, but having a new one pop up in every country they visit is faintly ridiculous. And it’s not as if there was an Al’Falqa action figure that just had to be promoted for Playmates.

I Love the (Early) ‘90s: Donatello comments on black smoke coming from Kuwait’s direction. Even though the Gulf War was “over a year ago,” some of the oil wells are still burning.

I Was Not Aware of That: The Black Stone of Mecca is a real item. The White Stone, according to some legends, is another part of the stone that was housed in a nearby city.

On Stump Asteroid, young contest winner Nobbie Bulkhead is saddled with Cryin’ Hound after Ace Duck and Trap abandon him. Cryin’ Hound explains that he constantly repeats his name because his mother, who gave birth to a large litter, didn’t want him to be forgotten. After a fire consumed “the maul,” where all of the puppies hung out, Cryin’ Hound was reunited with his mother because he memorized his name. Nobbie Bulkhead adopts Cryin’ Hound’s mannerisms and annoys Stump and Sling.

Review in a Half-Shell: What is this? I have no idea why exactly this back-up exists, nor do I truly understand Cryin’ Hound’s story. (It seems like knowing his mother’s name would’ve been more help after escaping “the maul” anyway.) Is this somehow another Elvis reference? The sheer absurdity of it is kind of entertaining, and I do like Hound’s line that the fire was “the kind of mess you don’t want your nose rubbed into.” What’s odd is that the lettering and colors remind me of Alan Moore’s 1963 project, even though this isn’t an obvious nostalgia story.

That final splash page where Shredder reveals himself has always stuck with me as one of my favorite scenes from this title. I think a big part of it was the fact that we hadn't seen him in nearly a year at this point, so his sudden reappearance really made an impact on me. Plus the sense of menace that he and Splinter were out there, alone in this sand storm, and Splinter was basically at his mercy, left me waiting anxiously for the next installment.

As a result, I even remember to this day exactly where I was and what I was doing when I read this issue!