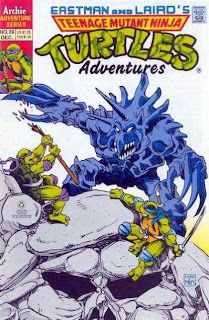 Following the events of Mighty Mutanimals #6, the Ninja Turtles and Mutanimals are being held captive by Null. Standing guard over them are the three monsters from the previous issue, who I guess we’re now supposed to refer to as Famine, War, and Pestilence (“Death,” or the Grim Reaper as he’s usually called in the story, sits in the distance, playing with puppets of the other three Horsemen). Jagwar asks Null why he enjoys destroying the rainforests and committing cruel acts. Null responds that death and destruction are his favorite things, and just to prove how evil he can be, he casually mentions that Jagwar’s mother will now join his harem. But that’s not all, because he’s also going to force his former aide Kid Terra to push the button that electrocutes the captured mutants. Villains often brag about “taking care” of the hero’s girlfriend, but Jagwar has to hear this stuff about his mother as the villain prepares to kill him, which is even sicker.

As Null leaves to retrieve Kid Terra from his base, Azrael arrives to rescue the mutants. The Turtles and Mutanimals team up against the three Horsemen. Unbeknownst to Null (probably because, like me, he didn’t read Mighty Mutanimals #6), Kid Terra, Azrael, and Juntarra, Jagwar’s mother, have escaped his custody. They spot the Grim Reaper playing with his puppets in the distance and discern that he’s actually controlling the monsters. 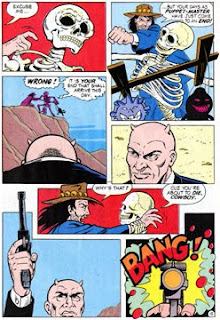 As Kid Terra struggles with the Grim Reaper, Null takes a cheap shot from his pistol and shoots him in the chest. Azrael, Juntarra, and Ninjara team up to fight Null, who responds, “I don’t kill women, I use them.”

As the battle rages, Screwloose checks on Kid Terra. While the Grim Reaper is busy harvesting Kid’s soul, Screwloose destroys his puppets, which causes the monsters to disintegrate. Without reinforcements, Null decides to escape the battle. He suddenly grows a pair of batwings, which exposes him as a demon. Null brags that he grows stronger which each act of evil as he flies away. I wonder if Clarrain/Murphy realized that his previous portrayal of Null was so over-the-top “eviiiilll” that he decided to make it an actual plot point. 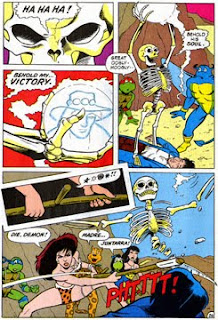 Review in a Half-Shell: Even without reading the Mighty Mutanimals chapter, this is still fun. It’s also another example of the book going into more and more adult territory, which makes the ultra-cute renditions of the various characters either off-putting or just a part of the title’s odd appeal. What’s really incongruous is the lettering change that occurs a few pages in. Only Gary Fields is credited with letters, but it’s obviously a very different style from his previous work for most of the issue. The letters are now large and round, with big curvy balloons that resemble something out of the Golden Age. It’s the type of lettering you would stereotypically associate with a kid’s comic, which is obviously not the direction Clarrain/Murphy has been taking the book. Seeing Null’s line about using women and the various “time to die!” threats lettered in this style is actually pretty humorous. If you just flip through the comic without paying attention to what’s actually in the word balloons, you would probably have a very different impression of what’s going on.