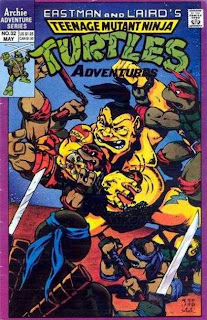 The Good, the Bad, and the Tattooed

After one of the gang members from the previous issue recovers from his beating, he explains to the Turtles that he came seeking their help. He reveals that his friend Tai San’s beloved chihuahua was stolen. Tai San soon arrives to give the details of the kidnapping. Gangsters known as the Yen Brothers have stolen his dog, and plan on killing it if he doesn’t throw his sumo-wrestling match. Ninjara, Raphael, and Leonardo go into the city to rescue Inky, the chihuahua. Everyone else keeps an eye on Tai San during his sumo match.

During the match, Tai San is introduced by his wrestling (and action figure) name, Tattoo. 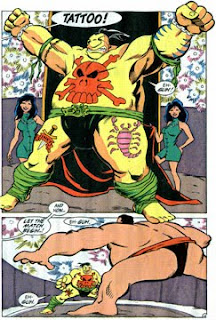 Yes, Tattoo is a yellow-skinned sumo wrestler. In fairness, the other Asian characters aren’t colored this way, but it’s still surprising that even in the early ‘90s you could get away with a character like this. I don’t know if there was ever an in-story explanation for Tattoo’s bright yellow skin, but it wouldn’t surprise me since the creators of this book don’t strike me as the eager-to-offend type. It’s possible that the creators didn’t even want to make him yellow, and he’s colored this way just to match up with his action figure.

Anyway… Ninjara’s team rescues Inky from his captors, as Leonardo reminds us twice that he hates guns. Tattoo refuses to throw his match, which leads to the Yen Brothers’ goons attacking him after the competition. The Turtles, along with Splinter and Warrior Dragon, fight them off. As the Yen Brothers try to escape, they’re confronted by Inky, who is apparently psychopathically violent. Tattoo returns home with the Turtles, where he gives them a “very old, very special” sword as thanks.

Review in a Half-Shell: I guess it’s been a few issues since we’ve had a throwback to one of the earlier “introduce the new toy” stories. Tattoo’s devotion to Inky is kind of endearing, and it’s another example of the book going off into weird places a standard superhero comic wouldn’t go. Chris Allan’s art veers into a very cartoony direction, which keeps the story from getting too dull.

Pizza References: Donatello comments that Tattoo can “probably put away more pizzas than Michaelangelo*.” I think the TMNT Handbook should rate all characters on their pizza consumption abilities, rather than that “Class 10 Strength” nonsense.

*I haven’t mentioned this before, but Michelangelo was still being spelled “Michaelangelo” at this time, based on a misspelling that goes back to the first Mirage issue. According to Wiki, the actual spelling of the painter didn’t become the official spelling of the Turtle until the most recent series began.

Wasn't Marvel still coloring Psylocke a sort of golden-yellow at this point? It wasn't as obvious as Tattoo, but I'm pretty sure it was still there...

Also, I seem to recall Inky getting his own back-up strip for a few issues later on. Weird.

I can remember when Psylocke looked slightly orange, and Rictor was slightly red/pink. This didn't bother me too much, since I assume the colorists were working with the limitations of the time, and the colors did do the basic job of establishing some sort of tan skin. When I read the early issues of the new X-Factor series, I often couldn't tell Madrox and Rictor apart (even though they were supposed to have different haircuts).

It was kinda weird how, when the Japanese videogame company Capcom got the license for X-Men, they gave Psylocke a yellow skin tone.

Actually, if you wanna be a sumo wrestler in Japan you can't have any sort of tattoos from what I heard. So it's a strange idea for a character.