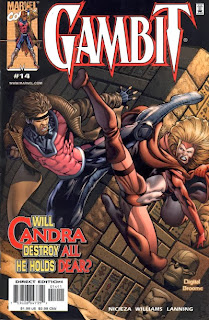 Summary:  In 1891, the Thieves Guild finds Ozymandias’ chamber.  Candra enters, thanking the Guild for showing her the way to Apocalypse’s secret library.  She imprisons Ozymandias as the Guild researches the texts of the Old Kingdom.  Meanwhile, Sinister stabilizes Courier’s cellular structure, but is unable to allow him to return to his original male form.  Sinister uses a drilling device to take Gambit and Courier to Ozymandias’ chamber.  There, Sinister defeats Candra, leaving her vulnerable to her fellow Externals, who are angered by her power play.  Sinister removes the knowledge of the Old Kingdom from the Thieves Guild and surgically places it inside Gambit’s brain.  After Sinister disappears, Gambit reveals to Courier that they’re stranded in the past.

Review:  You might remember the first hint of Gambit’s time traveling adventure came all the way back in issue #2, when Tante Mattie had a dream/flashback of Gambit saving her as a little girl.  That event never works into this storyline, but Nicieza does throw in a reference to it on the next to last page, assuring us that Gambit will get around to saving Tante Mattie before returning home.  If that leads you to believe that the time travel arc suffered from some last minute rewrites, or never really congealed the way it was supposed to, I can’t argue with you.  For the first two chapters, I think the art was the major hindrance of the storyline, as the late nineteenth century setting and steampunk elements just didn’t translate.  The story had promise, though.  This issue, characters kind of pop up when needed, important plot developments occur with little-to-no explanation, and the event that was originally used to foreshadow this storyline finally occurs (we’re told) off-panel.

Plus, Gambit’s still stuck in the past, and if memory serves, the resolution of how exactly he returned is botched.  It boils down to “he used his powers in a new way,” which is of course a stretch, but the execution was also hindered by the six month gap that was inserted into all of the X-books in early 2000.  Gambit’s stuck in the past, six month gap, bam!  He’s back.  And he’s leader of the Thieves Guild, so I hope you guys aren’t absolutely sick of those pests yet.  In fairness, Nicieza does use Ozymandias in a smart way this issue, playing off his original characterization as Apocalypse’s slave/librarian.  And, even if her plan goes nowhere, this is one of the few times we’ve ever seen Candra show some ambition and actually do anything.  But as far as Gambit goes, this isn’t a bad place to just say goodbye.  You can always look online if you really want to find out who New Son was, anyway.
Posted by G. Kendall at 10:30 AM

So...no more Gambit? You made it all the way through Mackie's X-factor, but this is too much? lol

I recall really enjoying this series until the six month time jump killed my enthusiasm for it (as it did for most all the X-books). So I can't say I'm sorry to see your reviews stop here.

I'm not reviewing any book past the six-month gap, so I'm only really skipping one GAMBIT issue. Howard Mackie did break me on MUTANT X, though. People will just have to search Paul O'Brien's old reviews of that train wreck.

What was the purpose of the six month gap? Was it meant to be a continuity fix or something, or was it done to simply create drama (six months later EVERYTHING IS DIFFERENT and now you will find vague hints as to why over the next year)?

If it's the latter, wow, that's pretty stupid. I missed this event but I wonder how many of those mysterious six month gap plots were given weak resolutions months after most readers stopped caring, or how many weren't resolved at all. I would imagine many of the writers came up with the six months later result first, and frantically worked backward from there over the next year to try to come up with a cause. Am I close?

Sort of reminds me of Untold Tales of Spider-Man. Hey, let's introduce new characters in Untold Tales, then have Spider-Man reunite with said characters six months later in Amazing as if they'd always been there! Yeah, great, I guess, but... why?

However they pitched it at the time, the six month gap was, above all else, a narrative crutch. It was simply an excuse to plug the existing characters into new, arbitrary roles without having to cover the ground of how they got there. While there's something to be said for such an in medias res set-up, in practice, it WAS pretty stupid. Among the sudden changes we were treated to, that I can recall:

-Gambit became leader of the Thieves Guild
-Psylocke is now (exclusively) telekinetic, an ability Jean has lost. Some kind of power swap between the two women was implied.
-Psylocke and Archangel rejoined the team.
-Cable joined the team
-Neal Shaara joined the team as Thunderbird (III)
-Marrow left the team
-Colossus and Rogue are in a romance of sorts
-Colossus grew a fugly ponytail, ignoring numerous angry phone calls from 1993.
-Synch is dead
-Nate Grey is a hippie shaman
-X-Force sucks

Of these, we get stories covering Thunderbird's origin and introduction to the team and at least some details regarding Marrow's absence (in the Spider-Man books, of all places). It all came across like Claremont had a specific vision for the characters and overall direction of the books, but wasn't well-versed in the big chunk of continuity between his runs. The six-month gap was probably inserted as a patch, an artificial explanation for the in-coming writer trampling over his predecessors.

It's easy to see how it was marketed as a selling point, both to hook new readers and to offer some assurance to old ones that revelations would be forthcoming. Anytime someone said, "Hey! What about--?" editorial could reply, "Six month gap!" That had to be a lot easier than dancing around dropped storylines the way they used to.

If you're not reviewing anything past the six month gap, does that mean you're done (or nearly done) reviewing X-books?

More curious than anything, as you've still got plenty of other stuff to cover that I enjoy reading about, but wondering if this is a little quasi-end of era for coverage of actual X-Men comic books by you.

@Dan: I missed this event but I wonder how many of those mysterious six month gap plots were given weak resolutions months after most readers stopped caring, or how many weren't resolved at all.

Mostly the latter, as I recall, mainly because most of the hints were setup by Claremont and he was shuffled off the books (onto X-Treme X-Men) before he really had a chance to pay off much of what he setup, and his transition corresponded to a linewide reshuffling (the one that brought Morrison aboard) that led to most of the other "six month gap" stuff in the other books getting forgotten as well.

I thought Synch died during one of the Counter-X stories (the end of the first one, maybe)? I seem to recall his death being part of an actual story, rather than something that happened off-panel during the six month gap.

It all came across like Claremont had a specific vision for the characters and overall direction of the books, but wasn't well-versed in the big chunk of continuity between his runs.

Yeah, rightly or wrongly, I've always had the impression that the six month gap was something Claremont wanted, a way to rejigger things to his liking in one fell swoop and immediately setup a bunch of mysteries and subplots he could pay off in the course of his run.

"If you're not reviewing anything past the six month gap, does that mean you're done (or nearly done) reviewing X-books? "

As for Synch, I think he was killed off during the gap, and then the story of his death was told in a flashback story.