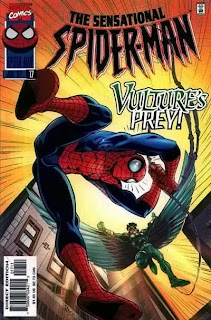 The Plot:  Peter bluntly tells Billy that he can’t do his job with Billy around, then disappears and reemerges as Spider-Man.  Prowler escapes by jeopardizing the crowd and distracting Spider-Man.  Later, after talking to Hobie, Spider-Man investigates the ER workers who might’ve discerned the original Prowler’s secret identity.  At the apartment of Rick Lawson, Spider-Man finds the Vulture and Prowler locked in another battle.  After webbing up Prowler, Spider-Man succumbs to vertigo, leaving him vulnerable to the Vulture’s attack.

Web of Continuity:  Spider-Man has been suffering from sporadic bouts of vertigo since his encounter with Morbius in Peter Parker, Spider-Man #77.

I Love the ‘90s:  The letters page advises you to save thirty-two cents on a stamp and send your letters through Marvel’s new email address.

Review:  Oh, this is going through three issues?  (And the story’s getting interrupted next issue for “Flashback” month?)  I don’t think there’s enough of a story here to justify that many chapters, although I suppose the two back-up stories ate up some space Dezago felt he needed.  This issue, Spider-Man discovers the new Prowler’s true identity, and thanks to a bit of synchronous cross-title continuity, also suffers a bout of vertigo that puts him in cliffhanger-worthy danger.  The art’s still great, and Dezago actually is working in some decent jokes now, so it’s not a bad middle chapter, even if the plot seems to be moving a bit too slowly.  I should also point out that Billy Walters, a character I’ve never had strong feelings for, serves his role adequately this issue as an annoying but well-meaning nuisance in Spider-Man’s way.  I can’t tell if he’s intended to be anything more than a Jimmy Olsen stand-in, but I do like the basic idea of Peter having to be a jerk to someone that doesn’t really deserve it.

The Plot:  Spider-Man talks to the irrational DK, relating to him the loss of his own “brother.”  Spider-Man encourages him to move on.  DK comes to his senses and turns himself back in.

Web of Continuity:  Spider-Man’s “brother” is, of course, Ben Reilly.

Review:  I can only assume these back-ups existed to buy Mike Wieringo some deadline relief.  As much as I like the work Wieringo’s doing during this arc, I think I would’ve preferred Richard Case continuing the Prowler/Vulture story and just getting the arc done in two issues.  Especially if next month is “Flashback” month, which is only going to drag things out even longer.  Outside of throwing a bone to the still-vocal Ben Reilly fans, I see no real point to these back-ups.  DK is angry, Spider-Man has an Oprah moment and tells him to let go of his anger, and everyone’s back to where they were before this started.  Except for the families of the guards casually killed during DK’s tantrum, of course.  We can’t let them get in the way of the schmaltzy ending, though.  Easily forgettable stuff, unfortunately.