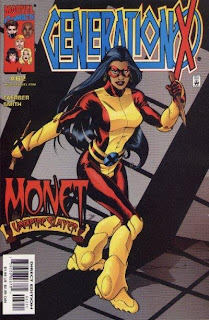 Summary:  Using her telepathy, M is able to fend off DeLaCorte’s psychic influence.  M tries to expose DeLaCorte to the local police, but he’s immune to sunlight.  That night, she’s attacked by Tabby, a girl DeLaCorte “turned” earlier.  She impales Tabby on a stake, then seeks out DeLaCorte in his office.  His secretary, Mrs. Hilmersson, exposes herself as a vampire and covers DeLaCorte’s escape.  Eventually, M catches up with DeLaCorte and impales him on a building’s spire.  Following his death, the school closes down and M returns to the Massachusetts Academy.

Continuity Notes:  According to M’s research, being bitten doesn’t make you a vampire (unless you’re actually killed), but does enable the vampire to mentally control you.  As for DeLaCorte’s ability to withstand sunlight, he credits a process credited by Captain America villain Baron Blood.

Review:  Jay Faerber concludes his run, and as I suspected, there’s no room to resolve any of the ongoing subplots he left growing in the background.  I suppose he could’ve resolved this vampire plot in just a few pages and spent the rest of the issue rushing through Adrienne Frost’s story arc, or providing some resolution to the romantic entanglements amongst the team, but that would’ve surely shortchanged all of the storylines.  Instead, he devotes the entire issue to M, who narrates the story in what I’m assuming is an homage to Buffy.  Her unwillingness to call in Generation X for help is treated as an intentional plot point, driving home the idea that M is determined to move away from the team.  Unfortunately, the story doesn’t give her much of an arc to go through, so her decision to return to the school at the end feels largely arbitrary.  The extremely inconsistent art, which makes M sometimes unrecognizable, doesn’t help things either.  Not a great issue to go out on, but Jay Faerber’s stint as writer is still a clear highlight of the book’s run.