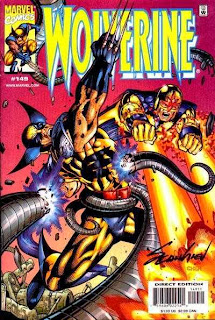 
Summary:  Wolverine, now dealing with the loss of his powers, escapes the rain at Marvel Burger, the fast food restaurant that employs Nova’s alter ego.  Wolverine then searches the area to find the Magneto robot that appeared earlier.  He’s soon abducted by the Reanimator, who has assembled an army of discarded robots.  Nova notices the disturbance nearby and soon recruits the help of the New Warriors.  They learn that the Reanimator is a mutant who can no longer control his robotic creations after losing his powers.  The last of the robots is destroyed and Reanimator is sent to prison.

“Huh?” Moment:  The robots are somehow still sentient, even though Reanimator lost his powers weeks ago (and is only now discovering it.)

Review:  Erik Larsen closes out his run, resolving one of his dangling plotlines (one that apparently made its way into Nova as well).  I’m not sure if anyone was too engrossed in the “shadowy figure controlling robots” mystery, as it was the obviously the most pedestrian of the ideas introduced by Larsen during his run.  What we really needed was the true identity of Khyber, because I know that’s been keeping me up nights.

I recognize that Larsen wanted to tell different Wolverine stories during his stint; to pull him away from the “ninja and super-assassins” (a term Wolverine actually uses this issue on the final page) and towards more traditional Marvel villains.  Theoretically, that’s fine, but I think it led to stories that often felt like generic Bronze Age comics with Wolverine shoehorned in as the protagonist.  This issue is probably the most egregious example.  Wolverine stumbles on to villain, Nova helps, Wolverine beats villain.  The Reanimator is only notable for having a bizarre speech pattern, and I can’t tell what the point is supposed to be.  I think the idea is that he’s just not good at making villainous threats, but I’m not sure.  If the joke doesn’t come across, it’s not a great one.

The art for the issue is handled by Graham Nolan, who had a brief stint doing random jobs for the X-office during the end of the Bob Harras days.  Nolan’s not flashy, but he serves the story well and I like his interpretation of Wolverine.  Unfortunately, the look of the issue is ruined by the odd coloring choices.  Everything’s too bright, and virtually all of the colors just look flat.  I can only assume that this is the work of the dirt-cheap color separators Marvel used to hire out of Ireland.  Apparently, everyone within Marvel hated their work, but they were the only company that most mainstream Marvel titles were allowed to use.
Posted by G. Kendall at 8:26 AM

I really liked Larsen's Nova. It was a lot of fun. I think it only ran seven or eight issues. Might be a fun candidate for the Not Blog X review treatment...

I'm a big fan of Nova after DnA's incredible run, so I for one would love to see reviews of Larsen's run. From what I understand he was a fan of the character and had some throwbacks to the 70's series in it.