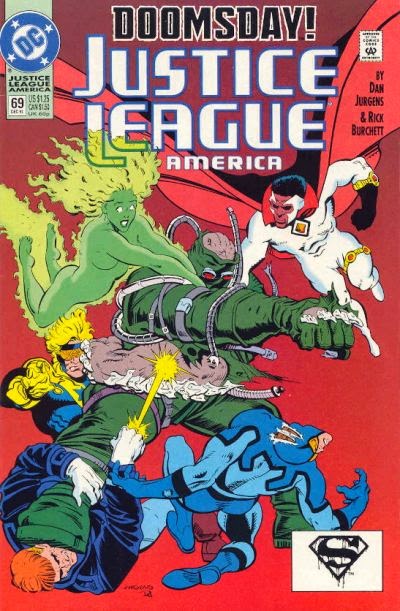 Summary:   The Justice League follows Doomsday’s trail to Ohio, where they soon  confront him at an oil refinery.  Meanwhile, Superman is interviewed by Cat Grant and her studio audience.  During the Justice League’s fight,  Blue Beetle is nearly killed.  When the news bulletin breaks inside the  television studio, Superman immediately flies to Ohio.  He arrives in  time to save Booster Gold, who’s been thrown into the sky by Doomsday.

Mom, Apple Pie, etc…:  Superman refuses to dignify a sexist remark about Fire’s looks made by a studio audience member.

Review:   I hope you enjoyed Doomsday killing wildlife and smashing up  semi-trucks in the last chapter, because that’s what you’re getting  here.  The art does a lot to save the thin plot (Jurgens/Burchett’s rendition of the cloaked Doomsday is reminiscent of something Mike Mignola would draw…those red goggles are creepy),  but it’s easy to imagine how much better this issue would’ve been if it featured a Justice League team not comprised of second-stringers.  It’s  amazing to me that DC ever thought there was a substantial audience for  a team like this, and that it took them so long to actually give  readers the Justice League they wanted to see.  Jurgens is able to introduce the team and their powers in such a concise manner it would make Jim Shooter proud, and his Bloodwynd/Martian Manhunter fake-out is a fun play on audience expectations, but the team has no visible chemistry and there’s no obvious reason to care about any of them.

The fight scenes are interrupted with quick clips of Superman being interviewed by one of his supporting cast members, which if nothing  else, serve as a reminder of his personality before his inevitable death scene.  Superman doesn’t want to badmouth any of his teammates, even Guy Gardner, he agrees with a hippie audience member that violence  shouldn’t be the answer, and believes in treating ladies with respect, thank-you-very-much.  He also admits that he occasionally fears his own death, in a bit of not obvious at all foreshadowing.  The interview segments do a decent job of straddling the line between earnestness and corniness, and the bored reactions of some of the audience members highlight one of the points the event’s trying to make -- people are  taking Superman for granted.  Mike Carlin would later cite this point in interviews justifying the decision to kill Superman.  I actually think  it’s a legitimate avenue to explore, even though this is one of the few occasions the storyline even touches on the issue.

superman became a "face" of the jla, and an add-needed member in time of crisis after the events of "panic in the sky", but didn't become a full-time member as you mentioned, until the morrison years. :)

Burchett and Jurgens made a great art time. I liked their work more than the Jurgens artwork we got in the Superman title.

With regards to the team of second stringers...most of them (Fire, Ice, Guy Gardner, Booster Gold, and Blue Beetle) were coasting by on the goodwill of the Giffen/De Mattis era...

Its interesting, but I prefer my teams to be composed of so-called "second-stringers." Frankly I'd rather see a team like this then six guys with their own books and one cipher (sorry J'onn!)

If the team that went up against Doomsday in this storyline was the classic seven, is there any chance that Batman would have been beaten into a coma that lasted...months? Years?* Or would Green Lantern's ring have been broken, leading to years of him finding other technologies to get back in the game? Or would Wonder Woman have lost her powers for years?

Even if DC would try these storylines (and why not, they did try plenty of worse ones in the 90's...or 00's, or 10's), you KNOW that they wouldn't happen in their team book, because they had their own titles.

Its the same with character beats. Good writers can and do work around it, but clearly someone with their own book(s) isn't going to go through major personal issues in the team books.

All that to say, I absolutely loved the second-string JLA, JLE and JLI, and will still get in a knife-fight to defend the 90's Avengers titles (well, the Defalco-Epting main title and Roy Thomas West Coast run); its actually among my favourites. I know full well that part of this is because it was what was out when I got into comics, of course. But I get upset when people write of the era because characters had stubble and pouches and jackets. Right, because nothing good happened in Silver Age X-Men comics because they were silly, and Chris Claremont's excessive narration and dropped plotlines mean that his run is worthless too.

Wow! This became a heck of a rant, my apologies. None of this is directed at this G. Kendall or this post in particular. I love this blog, and even when I disagree with GK, his years of posting here more than prove that he's not writing the 90's off, or at least not without a heck of a lot of thought involved. Just wanted to make the point that, hey, I want to read JLA stories about the second-stringers!

*I honestly can't remember how long Blue Beetle's coma was. I know that Death of Superman happened while I was living outside of the country for three years as a kid, and Blue Beetle was back before I moved home, but I know it felt like quite a while.

Which is another thing (and now I'll sound like a crotchety old man), I miss the pace that comics maintained through the 90's. If BB was out of action for, say a year, that was probably 8 storylines. Now, that would be maybe 2. I've been re-reading my Essential X-Men collections, and am stunned at how much we've lost in terms of story-per-issue.

I absolutely recognize the importance of having second-stringers in a team book, for the reasons you cite. But an entire team of them sounds like a terrible idea to me. JLA was conceived as a showcase for the biggest DC stars, so going years at a time without any of them violates the basic premise, in my mind.

Superman joined JLA when Jurgens took over from Giffen & DeMatteis with #61, and that membership run only lasted until his death.

I caught myself writing another rant, but scrapped it. I want to write that much, I should get my own blog! Anyway, I don't think there's such a thing as right or wrong on the issue (sales in the 90's said I was, sales now say you are).

Anyway, count me among those glad to see you covering this storyline. I can't remember if you said, but I hope you're covering the whole Funeral for a Friend, four Super-Men, etc.

I reread my trade when I read you were gonna tackle it, and I'm starting to reconsider it: I now reckon its' quite a read, a good saga, not just a "by-the-numbers let´s kill Supes" kinda thing

I always felt like the first two dozen or so issues of the post crisis jll reboot was great and the next few years up until Morrison were futile attempts to recapture that. An actual post crisis jla reboot in the vein of year one, man of steel or Perez wonder woman could have been great