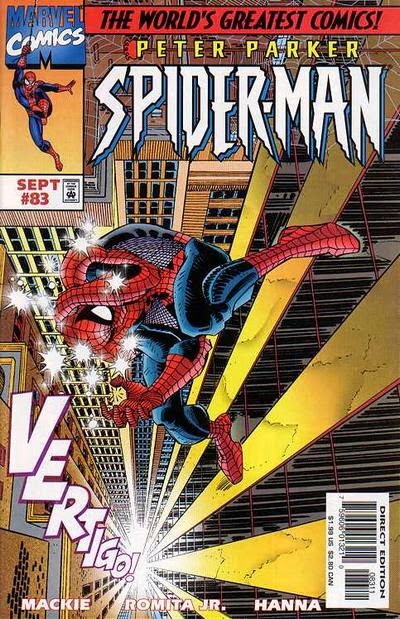 The Plot:  Spider-Man makes his way to an open window, but the Shocker suddenly appears and blasts him.  After Spider-Man catches himself again, Shocker stuns him by simply walking away.  Spider-Man lingers until the piece of the building he’s holding on to collapses.  Meanwhile, Robin Vega confronts Paul Stacy.  She warns him that she could kill him but has chosen not to.  The Friends of Humanity burst in and attack Robin.  Paul’s apartment building catches fire, and he soon proves himself a hero when he risks his life to save a young girl with Robin.  Robin defeats the FoH members and brands “Mutie” on their foreheads.

The Subplots:  MJ meets with her therapist, but is frustrated when Peter doesn’t arrive for their counseling session.

I Love the ‘90s:  MJ tells Dr. Reandeau (who never appears on-panel) that she and Peter are no different from “most other young married couples in the ‘90s!”

How Did This Get Published?:  Robin Vega to Paul Stacy:  “You look frightened, Paul.  As though you’ve never actually faced a woman whose mutant powers allow her to convert herself into living metal.”  Smooth exposition, there.  I guess I should be happy she’s using contractions, though.

Review:  I’ve always loved that cover, and the interior art is also great.  Romita has to convey for the entire issue that Spider-Man’s suffering from vertigo while hanging off a building, but rather than going the obvious route and draw some wavy buildings or undulating panel borders, he instead uses the page layout to give you a sense of scale.  Long, skinny panels help to convey how high up Spider-Man is, emphasizing just how terrifying tall buildings actually are, especially if you happen to be clinging for your life on the side of one.  The vertigo itself is represented by some fuzzy lights around Spider-Man’s head, which might seem like a copout, but I think it’s a much smarter move to emphasize Spider-Man’s location and to represent the disorientation with standard artistic shorthand.  Conveying an actual sense of vertigo is virtually impossible in the static medium of comics (How often did you really feel vertigo when the mutant Vertigo used her powers and an artist just drew circles everywhere?), but you can create scale.  Spider-Man truly feels like he’s in danger this issue, and to Mackie’s credit, it actually is a nice use of this vertigo subplot that’s been hanging around for months.

I’m, let’s say, less charitable about the rest of the issue.  MJ’s subplot consists of her whining about Peter yet again, which is unfortunately turning into her default state in many of these post-clone issues.  There’s nothing wrong with the concept of Peter and/or MJ exploring therapy, but Howard Mackie just isn’t the writer best suited to write them.  And the Shocker’s appearance in the issue is annoying to say the least.  First of all, revealing that he’s the mystery figure from the previous issue is a bit of a cheat, since I don’t believe Herman Schultz has ever been shown with long hair before.  Secondly, he has no real motivation to even be here.  He wants to kill Spidey, then decides it’s too easy at the moment, brags about his new “deal” that won’t make him a loser anymore, and then leaves.  That’s compelling.

Finally, the Paul Stacy/Robin Vega subplot continues to drag the book down, as Mackie is incapable of making either character engaging or sympathetic in any way.  Robin is an oppressed mutant cliché, and Paul is just so poorly defined he’s impossible to take seriously as a character.  Paul’s lack of identity is an intentional plot point, granted, but it’s not as if his search for self is coming across as authentic in any way.  He goes from terrorizing an innocent woman to saving a little girl in the course of one issue, all the while reminding us at every opportunity that he sure hates that Spider-Man.  I think the original idea behind Paul was to play him up as an “intellectual” bully for Peter, as opposed to Flash, but Paul never comes across as particularly bright.  We’re just told that he’s smart.  And Peter was forced to deal with Flash because they were stuck in high school together.  Peter’s an adult now; it’s not as if he absolutely has to tolerate this guy.  He could easily hire a new tutor, and it’s not as if the stories have convincingly sold us on the idea that Peter really needs a tutor, or that he’s particularly invested in returning to school anyway.  We know Peter’s back in school because the creators are nostalgic for that era, but it would be nice to have a justification within the stories.
Posted by G. Kendall at 6:30 AM

JR jr. drew some amazing covers during this period. I think I've said before, but I've never enjoyed his Spider-Man work more than this time, around 1997-2000 or so.