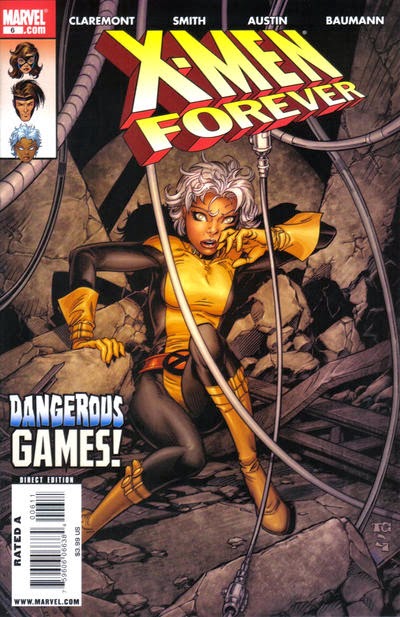 Summary:  Cyclops is annoyed when Shadowcat, Gambit, and Nightcrawler take a break from clean-up and play a makeshift game of baseball with the Danger Room’s debris.  ‘Ro watches from the overhead booth and suddenly blasts into the room when her powers go awry.  Soon, the remains of the Danger Room come alive, but are defeated by Cyclops and Gambit.  Later, Cyclops convinces Gambit and ‘Ro to stay with the X-Men, while Sabretooth has a heated exchange with Xavier, Beast and Jean Grey investigate Burnout, and Daisy Dugan sends footage of tanks that have been mysteriously flattened.

Continuity Notes:  ‘Ro (a.k.a. Kid Storm) apparently has no memory of her life as Storm, since she doesn’t recognize Cyclops or Lockheed.  However, ‘Ro’s memories of the X-Men were fully restored by the time of “X-Tinction Agenda.”  This is addressed later.

Review:  "Play Day!" is a fairly typical issue of Forever, in the sense that it reminds me of many of the elements that initially drew me into the X-titles, yet has several moments that just make me groan.  I’ll start with Burnout, as the basic premise is recapped but (much like, say, the Legacy Virus) no progress towards a cure is made.  “We all of us seem to die young,” Beast says to Jean.  Sure, unless you’re Destiny, Sabretooth, Wolverine, Apocalypse, Xavier, Magneto…let’s just forget about them.  Burnout is a premise that could work, but being reminded almost every issue of its obvious holes isn’t helping to sell the storyline.  There’s also an exchange between Sabretooth and Xavier that mainly serves to remind us of what a deceptive creep Xavier is, which hardly seems fair.  Claremont has a nice hook for the conversation -- that Sabretooth may be an animal but at least he doesn’t pretend to be anything he isn’t -- but I’ve yet to read anything in this title that convinces me we needed another story about Xavier keeping horrible secrets from the team.  I also question why the X-Men seem so blasé about the Danger Room’s remains suddenly coming to life.  There’s no explanation at all in the story, no hints that it’s a mystery that will be followed up on, and the X-Men don’t seem overly concerned about investigating what exactly happened. 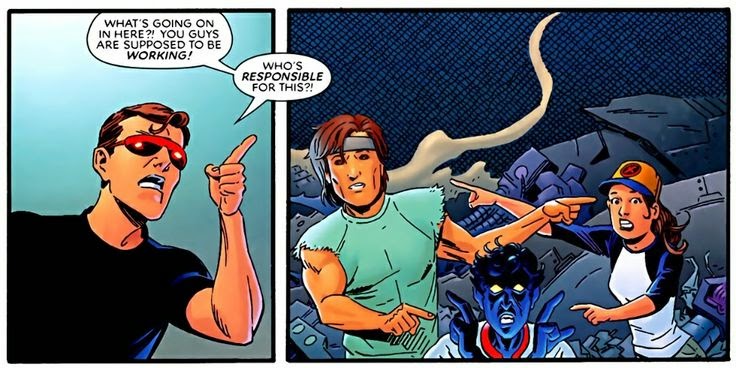 All that said, there’s enough in the issue to remind me of what Claremont does so well in X-Men stories.  The baseball scene is fun, the character interactions are well-scripted, and there’s more than enough going on to encourage you to read the next issue.  Having Paul Smith, with Terry Austin as the inker no less, appear as the fill-in penciler is also a nice surprise.  His style has become much more abstract over the years, but with the possible exception of Beast, I think there’s still something iconic about his X-Men.  Admittedly, all of the X-Men vaguely resemble children now, but I think Smith pulls it off in a way that Chris Bachalo didn’t years earlier.
Posted by G. Kendall at 6:00 AM

I love the way Smith draws Cyclops's glasses. Of all the X-artists over the years, only he, Byrne, and Alan Davis seem to understand that Cyclops can't wear any old sunglasses. He needs big, chunky shades in order for them to do any good.