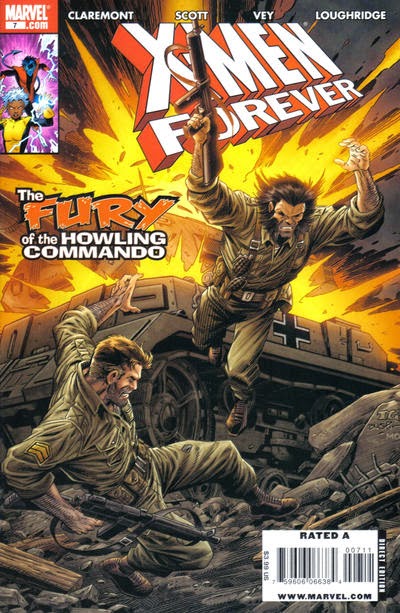 Summary:  In the Andes, a SHIELD team is attacked by a mysterious force.  At the mansion, Xavier and Nick Fury monitor the situation.  After the team is killed, Fury takes Beast, Rogue, Nightcrawler, Shadowcat, and Jean Grey with him to investigate.  On the way there, he flashes back to his first encounter with Wolverine during WWII.  Fury’s Howling Commandos were teamed with British and Canadian troops and charged with stopping the work of Dr. Dietrich Trask.  Wolverine killed Dr. Trask and Trask’s work was destroyed.  In the present, the team arrives in the Andes and is soon discovered by a Sentinel.

Approved By Modern PC Police:  Nick Fury chews on a long straw during the WWII flashback, instead of smoking his trademark cigar.

Review:  Notice that this issue has a fill-in penciler, inker, colorist, and letterer.  The bi-weekly schedule of this book could be brutal, so it’s somewhat remarkable that the series has run six issues with a fairly consistent creative team.  As far as fill-ins go, this is better than you might expect.  Steve Scott has a decent handle on the cast, and he’s able to adjust to the abrupt WWII flashback quite well.  The letters are also reasonably Orzechowski-esque, so much so it’s not obvious he’s missing at first.  The colors aren’t on the level as the previous issues, the palette just seems dull, but overall the issue looks presentable.

The main plot advances only incrementally, perhaps because Claremont’s waiting on Grummett to return before truly moving forward.  The Sentinels’ return is teased throughout the issue until one finally shows on the final page, there are numerous talking head pages, a lengthy discussion over which X-Men should travel to the Andes, and a WWII flashback suddenly pops up for a few pages in the middle of the book.  Claremont manages to maintain some humanity by emphasizing Fury’s reaction to Juniper’s death, but it’s odd to see him spend so much time building up the Sentinels as a major threat.  It’s my understanding that Claremont always dismissed them as dull, which would explain why they so rarely appeared during his original run.  As X-Men Forever continues, the reader is suddenly expected to treat Sentinels and the Task family as if they’re the team’s greatest threat, a creative decision I still can’t understand.

What’s truly incomprehensible are the new costumes.  After appearing on the cover for months, they finally make their in-story debut this issue.  It’s a remarkably quiet debut, too, since no one comments on the fact that virtually the entire team has switched outfits in-between issues.  I’m assuming that Steve Scott was sent those costumes as the new models, and no one in editorial  noticed if the X-Men were supposed to be wearing them by this issue.  It’s hard to make an objective judgment on the designs; just the concept of new costumes in this book is perplexing.  Even if you ignore the established continuity that the existing costumes are already new at this point, it’s hard to deny that an entire generation of X-fans consider these outfits to be the “classic” looks for the team.  Since all of these costumes have been abandoned over the years, the existence of one X-Men comic with the “classic” costumes on the cover had to work to the title’s advantage.  And now that’s gone.  Also, the X-Men change costumes all of the time these days, so there’s nothing special about seeing new outfits in this book, too.  There’s nothing out of the ordinary about new X-costumes, but seeing the characters the way the audience remembers them actually was unique.  Why throw away one of the title’s strongest hooks, especially so soon?
Posted by G. Kendall at 10:30 AM

I feel like I've already agreed once with you on the costume thing, but I'll do it again. Preach on! Seeing the nineties costumes back in action, and drawn so beautifully by Tom Grummett, was a huge part of this series' appeal for me. Possibly even moreso than the advertised draw of Claremont continuing his original run (especially once it became clear he wasn't really going to be doing that)!

I still believe CC should have started this title at the end of the Shi'ar storyline in #277. Even though his original plans had been leaked online for years by this point, he should have just bit the bullet and began with his original idea for the Muir Island Saga. The new costumes would have been jarring for sure, but it would have made more sense than the X-men getting new costumes and then getting newer costumes less than a dozen issues later.

Of course, we probably would have still had to suffer through Burnout and Little 'Ro...

I agree about the commercial folly of changing the costumes, but I never really understood the complaints from a story perspective. The X-Men were changing costumes pretty rapidly back during this era. Cyclops and Jean Grey were in Blue/white and Orange/yellow respectively in X-Factor #62.

In X-Factor 65, they were in matching blue/yellow.

Six months later, X-Men #1 hit the stands, and Cyclops and Jean had each changed into a third costume. That's two costume changes in the space of ten months, real time. (Which means, what? Two weeks of Marvel time?) Those Portacio designs really didn't get much of a shot.

The X-Men similarly got a "fresh start" costume-wise beginning in X-Men 273, when they all changed into the matching blue-gold thing. "Less than a dozen issues later" came X-Men #1, wherein Logan, Storm, Gambit and Psylocke had all ditched the blue/gold outfits.

At least from there it stabilized: Wolverine stayed in his brown/orange costume for an impressive three issues, before going blue-and-yellow in X-Men #4.

Over in his own title, the switch occurred in between Wolverine #49 and #50, at which point his look was evermore blue and yellow ... well, until Wolverine #57, in which he went back to orange and brown ...

My main problem with the costume changes in Forever is not that they occur, but that they are all pretty darn uninspired.

Well, to be fair, many of those costume changes were result to behind-the-scenes stuff...a new artist/creative team and/or new direction or reboot of the titles. Heck, Jim Lee changed Wolverine's costume to the yellow and blue one because HE felt it was the right one for him, or something.

With this title, CC seemed to have much more control over the title, in terms of the direction of the titles, so he could have handled it a bit better than he and Weezie could have during the late 80s/early 90s.

Costume changes, at least on major characters, used to be a rarity in comics, and when they did change, it usually felt like a big deal.

X-Factor may have gone through three uniforms over the course of seventy or so issues, but they were all basically the same pattern, so none of them felt that different or special. But when Jim Lee came along and revamped most of the group in one fell swoop, that seemed huge.

And while most of the Lee costumes stuck around for several years, ever since then costume changes haven't felt all that special. Every time a new creator comes on a book, costumes are revamped, it seems.

Some of the Lee outfits were discarded by 1999, but the few that remained were ditched when Claremont returned to the books and everyone was redesigned. Then barely a year later, they were all revamped again for the Morrison/Casey/Claremont era. And again for Whedon two years after that. And so on. Costume changes, at least for the X-Men, don't feel like a big deal anymore.

I wish Marvel would lay out some definitive, iconic model sheets for these characters and stick to them. I'm honestly somewhat surprised Disney, the masters of keeping things "on model", haven't forced them into that.

"Heck, Jim Lee changed Wolverine's costume to the yellow and blue one because HE felt it was the right one for him, or something. With this title, CC seemed to have much more control over the title."

I'm not sure the logic follows. When Jim Lee had control, Jim Lee changed the costumes. So on a title when Claremont has control ... Claremont shouldn't be allowed to change the costumes?

Either way, my comment was meant more from an in-story, "in universe" perspective. I don't see how people can say it's strange that the X-Men would change their outfits again so soon after the previous time. My point was that several X-Men of that era were changing outfits every six months or so.

My point is that, within the story, they did it back then. For them to do it in X-Men Forever is not out of character.

And as you pointed out, it's for the same exact reason. ""Well, to be fair, many of those costume changes were result to behind-the-scenes stuff...a new artist/creative team and/or new direction or reboot of the titles."

A new creative team, a different direction, a reboot. That all describes X-Men Forever. It's the same thing as the early 90s, happening to the same characters, and for the same reason. I don't see the problem.

"Costume changes, at least for the X-Men, don't feel like a big deal anymore."

That was kind of my point. I never understood the ire directed specifically at X-Men Forever for having costume changes. The X-Men do it all the time.

And I disagree that the Jim Lee X-Men #1 designs somehow felt like a bigger deal. That might have been your perception, but for me, the big change was the one in Uncanny 273-277, with iconoclasts like Storm, Wolverine, Gambit and ElektraBetts all adopting the blue/gold uniform look. That seemed like a substantial new direction, aesthetically.

To me, X-Men #1 felt like a step backwards fashion-wise, with Gambit, Psylocke, Wolverine, etc. all going back to their pre-UX 273 looks.

Also, is it accurate to say that Jim Lee "revamped most of the group" in X-Men #1? Cyclops, Jean and Rogue got new costumes, but it seems like everyone else just went back to something they'd worn in the past. Storm is a quasi-exception, maybe ... it's pretty much her Silvestri outfit, but with no lightning bolt on the front, and some extra "X" symbols added. Even counting Storm, that's only about a third of the characters in X-Men 1.

"I'm not sure the logic follows. When Jim Lee had control, Jim Lee changed the costumes. So on a title when Claremont has control ... Claremont shouldn't be allowed to change the costumes? "

My point was that CC pretty much had no control over the X-men by that point. With Forever, he did, which seems strange that he wouldn't start off the title with new costumes, or at least wait a bit longer to introduce new costumes.

"My point was that several X-Men of that era were changing outfits every six months or so."

But in many of those cases, there was a reason in-story for the changes in costumes. A new start, promoting team unity, etc. With this, it's just...let's change costumes. Because...no reason?

"A new creative team, a different direction, a reboot. That all describes X-Men Forever."

Except not really. If that were true, then the change should have happened with the first or second issue...not the seventh.

Anyway, ymmv, but people do see the costume changes in a different way. Both views are valid.