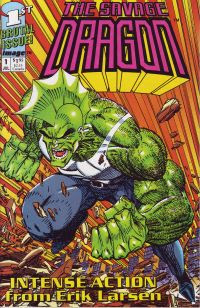 Summary
The Dragon wakes up in a burning field with no memory of his life. Police officer Frank Darling gets him a job with his cousin, while trying to convince him to join the Chicago Police Department. Super-freaks are overrunning the city and the police need help. The Dragon refuses the offer until Frank’s cousin is murdered by a pair of freaks. Dragon joins the police force and begins fighting Chicago’s super-freaks, drawing the attention of the Vicious Circle.

Not Approved By The Comics Code Authority
There’s a lot of blood, thongs, and naughty words. The series will continue to push the envelope for years.

Review
Savage Dragon wasn’t as popular as many of the other early Image titles, but it’s outlasted almost all of them. It’s the only founding Image title that’s maintained its original creator, with Larsen writing and drawing well over one hundred issues of the series so far. Unlike most of the other Image comics I’ve looked at this week, Dragon is actually fun to read. Like many of the other Image founders, Larsen has a thousand characters he wants to introduce, but he manages to do it without cluttering the story. He accomplishes this by not giving his characters any complicated backstories or mysterious connections to one another. Dragon is a big green guy with amnesia. There are a lot of super-powered criminals in the city and he has to stop them. Who needs origins? It’s an interesting take on the superhero concept. Larsen skips ahead to the action, and you learn about the characters as the story goes along. Everyone has straightforward motives and no one has years of complicated backstory behind them. It kind of reminds me of the way Bruce Timm and company would later handle the Justice League Unlimited cartoon. Almost none of the heroes were given origins; many of them were never even named. They’re there to be the heroes and fight the bad guys. In Dragon, you’re told that super-freaks are taking over the city and that the Dragon has to stop them. How exactly that bank robber turned into a giant shark-man isn’t important. I will say that Larsen is a little too eager to get the action going, though. Dragon sees his friend blow up right in front of him, and is cracking jokes the same night as he joins the police force. He comes across as kind of a jerk, although that might have been intentional. 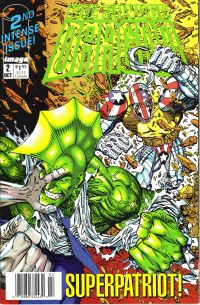 Summary
The Dragon continues to fight Chicago’s super-freaks. Dragon is called in to stop a group of freaks who have taken hostages inside a shopping mall. While fighting the freaks, a superhero-turned-cyborg called Superpatriot arrives. He shoots the villains, apparently killing them in cold blood. Dragon tries to stop him, but loses a lot of blood and collapses.

Fabian Nicieza is given a “thank you” credit for helping to design Superpatriot. Nicieza and Larsen pitched for the relaunched X-Factor title in 1991. Superpatriot is a redesigned version of Crimson Commando, who was going to be a member. Before showing up in Savage Dragon, another version of the character called Cyborg X appeared in Erik Larsen's run on Spider-Man.

Review
It’s very light on plot, but that’s refreshing after reading so many cramped comics this week. Spawn was also light on plot, but plodding and kind of boring to read. Savage Dragon never drags. Larsen’s philosophy is to cut out the boring parts and get on with the action. Background details that don’t seem that important can come back and affect the main story. For example, Superpatriot’s assault and hospitalization takes up just a few panels in the first issue, and the info is given out as a TV news report. Initially, it seems as if this is just setting the scene for Dragon to replace the fallen heroes of Chicago. In this issue, Superpatriot is back as a cyborg (hey, it was the early ‘90s) and plays a part in the actual story. Larsen doesn’t waste time by having his hero mope around and feel sorry for himself (there’s only one scene where Dragon seems bothered by his amnesia), his character actually does something.

Larsen’s editorial in the first issue was free of any Marvel bashing, but he brings it into the actual story with this issue. As the issue opens, Dragon stops a “child devouring, web spinning, mutant ‘Spider-Man’”. The Dragon comments: “the bloated maggot was feeding on children…the years have him soft, fat and lazy. He’d gotten too big for his own good…still, it’s amazing the damage he’s done. Somebody had to put an end to this inhumanity.” A fellow officer replies, “Look at him. He got away with it for years because there was nobody around who could stop him. How could he do it?” So, Marvel was feeding on children? And now the fine folks at Image are going to stop Marvel’s evil? After all these years, I still don’t understand why so many of the Image creators were apparently so angry at Marvel. All of these guys had well paying, high profile jobs. The industry was healthy. They had their own series, and were given the option to write titles if they wanted. If you want to bring up the “Marvel stole my creations” argument, most of these guys weren’t creating too many new characters for Marvel anyway, and I’m sure all of them were well aware of the stipulations of a work-for-hire contract. Plus, almost all of these creators have done work for Marvel since leaving. If Marvel was so immoral, why go back? As an adolescent Marvel Zombie, I hated these attacks, and they initially soured me on the whole concept of Image. Thankfully, the attacks didn’t last for long and the industry moved on to other controversies (like a little project called Heroes Reborn…). 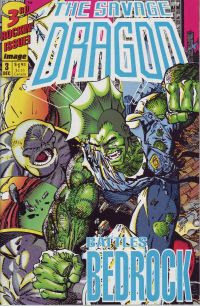 Summary
After going into a coma for nine days, the Dragon recovers from last issue’s attack and stops the super-freak Inferno. While at a press conference, Dragon is attacked by Youngblood member Bedrock. After proving his strength to Bedrock, he offers Dragon a membership to Youngblood. Dragon refuses and arrests him. Meanwhile, the Vicious Circle has learned that Frank Darling tipped the freaks off about his cousin’s warehouse, in an effort to convince Dragon to join the force.

Review
This is the weakest issue of the original mini-series. Almost all of the issue is devoted to a pointless fight between Dragon and Bedrock. Having the main character point out that the fight was stupid and pointless at the end of the story doesn’t negate the fact that the audience just had to read almost a full issue devoted to something stupid and pointless. Larsen does a fine job on the actual fight (his page layouts remain interesting, except for when he relies on too many two-page splashes), but it goes on for too long. Thankfully, Larsen would later learn how to balance story and action.

Since Larsen knew that he was continuing with a regular Dragon series, he begins to set up a few future plotlines with this issue. Savage Dragon earned a reputation early on as the “the good Image book” amongst many fans and pros. Everyone from Kurt Busiek to Mark Evanier to Chuck Dixon would have fan letters published in future issues. Larsen’s art would lose a lot of the trendy crosshatching and become more streamlined, a look that suits his style. For a while there, Dragon really was one of the best superhero comics on the market.
Posted by G. Kendall at 10:12 PM

Interesting. I remember always placing Larsen as one of the more arrogant and immature Image creators, along with McFarlane. But now he is probably the most mature (right there with Valentino, anyway).

The 2nd issue was my first Image comic. I remember being blown away by the violence, and the cast of characters seemed pretty engaging. I kept up with the series for about 3 years, far longer than I followed any of the other Image titles. Eventually, my expectations as a reader evolved, and the gratuitous sex and violence became tiresome. Anyway, I do think this was the best of the original Image line-up, and I admire Larsen for sticking with the series as long as he has.

Man, I loves me some Savage Dragon. In the begining I was attraced more to the boobs and violence, but Larsen has matured as an artist and storyteller. I now really like his humor and intricate storytelling. He has experitmented heavily with his art styles as well. I have nearly every issue, its all good stuff.

Savage Dragon was the one Image book I actually enjoyed. Fun stuff. It is the only Image book that I would consider scavenging out of the quarter bins, along with the various spin-offs: Freak Force, Mighty Man, Star, etc.