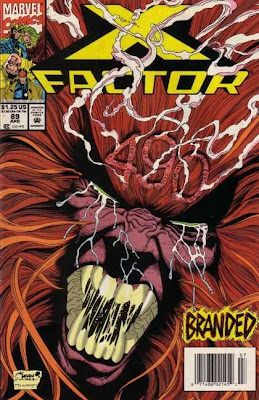 Summary
X-Factor arrives in Genosha with the X-Patriots and meets the new president. The president gives them a tour of the new Genosha, and asks the X-Patriots to represent the Mutates who are now adjusting to a normal life. Wolfsbane meets up with her foster mother, Moira McTaggert, who runs tests to determine why she’s been behaving oddly. Dr. Sasha Ryan and Moira determine that when Wolfsbane was turned into a Mutate, she was bonded to her master, Alex Summers. Sasha Ryan leaves to meet with a mystery man who wants all mutants dead. Meanwhile, Torq, a man claiming to be a tabloid reporter, shows Quicksilver pictures of his wife dating another man. Quicksilver threatens to kill him if he publishes the photos. Another mystery man tells Torq that he’s succeeded in making Quicksilver suspicious and in stimulating his “homicidal impulses".

Creative Differences
The last seven pages of the main story appear to have been re-lettered. Peter David has commented that the scene where Wolfsbane compares herself to a group of dogs is not what he actually wrote.

I Love the ‘90s
There’s an ad for a Sega CD game that lets you edit your own Kriss Kross and C&C Music Factory videos. Doesn’t that sound like fun?

Review
X-Factor finally arrives in Genosha, seven issues after Havok declared that they were going in #82. I guess he never said when exactly. This story still doesn’t feel as if it has a lot of momentum. The X-Patriots hardly appear in this issue, and the last seven pages are devoted to an unrelated Quicksilver solo story. Wolfsbane’s storyline is advanced, but it’s hard to tell if this is the actual story David set out to write. Revealing that Wolfsbane is “bonded” to Havok wouldn’t explain her sudden intense attraction to Madrox, for example. This is a mid-storyline issue to a storyline that was completed by a different writer and folded into a large crossover. It's unfortunate that this is Peter David's last issue. There’s not a lot going for it, except for the Quicksilver back-up, which is able to move from “very funny” to “very sad” over the course of a few pages.
Posted by G. Kendall at 8:08 PM