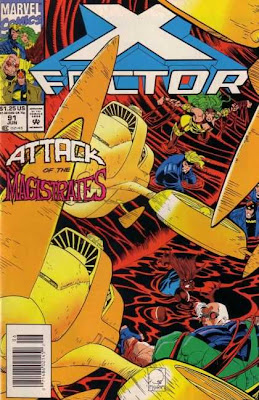 Summary
X-Factor fights a group of Genoshan Magistrates in the sewers while searching for the missing Mutate. The Magistrates want to terminate the infected Mutate and apprehend X-Factor for disobeying orders. Madrox finds the dying Mutate and creates a double to help him perform CPR. The Mutate explains to Madrox that he only wanted to die with dignity. With the Mutate returned to quarantine, the Genoshan president apologizes for X-Factor, while Madrox appears to be ill. Meanwhile, Val Cooper continues to deceive Quicksilver and keeps him away from the team.


Production Note
Joe Quesada is incorrectly credited as the artist of this issue.

Creative Differences
The original solicitation for this issue gives some insight for Peter David's plan for this issue. "New genegineer Sasha Ryan unveils a plan to rid the Earth of all mutants! Meanwhile, X-Factor battles Armageddon."


Continuity Note
Madrox says that he can’t create a duplicate while wearing his containment suit. When he needs to make a dupe, he takes his glove off and beats the wall, creating a duplicate wearing his regular costume. Marvel was still going with the idea that Madrox‘s duplicates only appear with clothes because he’s wearing unstable molecules, while the current explanation is that a field surrounds his body, letting him duplicate anything he’s wearing or holding (including a weapon). 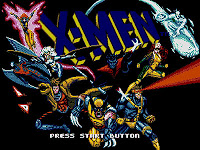 There’s an ad for the X-Men Sega Genesis Game, which came out during the peak of the X-Men’s animated popularity. It was by far the best X-Men game at that point, although I was disappointed that you could only use certain characters for “special help”. The ad surprisingly features abstract painted art, which doesn’t fit in with the look of the game or comics.


ReviewThe Genoshan storyline lingers on for yet another issue. The X-Patroits are completely ignored in this issue; their story arc never receives a conclusion. Most of this issue is dedicated to X-Factor fighting the Genoshan Magistrates, who are consistently portrayed as incompetent fools, so you never buy into the idea that anyone’s actually in danger. This story mainly exists to set up Madrox’s future death, which happens in the 100th issue. Marvel, for whatever reason, really wanted to kill off Madrox during this time. Peter David has said that he tried to explain to them that Madrox, of all of the members, would have the least convincing death (due to his ability to create duplicates), but Marvel was apparently adamant. Lobdell tries to beef up a mediocre plot with witty dialogue, but it falls way short of what David was doing a few issues earlier. Jan Duursema does a passable imitation of Joe Quesada, so it's a smooth transition from the previous issues and doesn't look that bad.
Posted by G. Kendall at 8:40 PM

Huh; I never realized how adamant Marvel was about killing off Madrox-I just assumed they wanted a big 100th issue death, and Lobdell, stpping in as a new writer, picked someone more or less out of a hat.

I wonder why they wanted him, specifically, dead so badly?

I forgot just how short Peter David's "X-Factor" run was! And it's still considered a classic, although not as much as his run on "The Incredible Hulk." Maybe it has quite a bit to do with how it was suddenly cut short, although I suspect it has just as much if not more to do with the fact that he was the only X-writer from the period who was actually trying to break away from the Claremontian status quo.

This was the issue where I realized that Peter David was gone for good. I was not happy. It felt like the whole X franchise was going off the rails at this point.