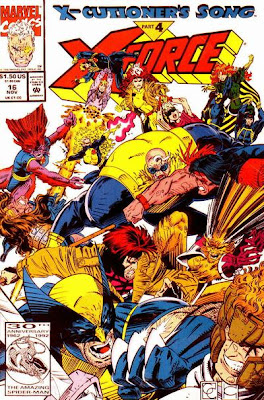 
Summary
X-Force is able to temporarily escape the combined X-Factor and X-Men
teams, but is soon captured. At the mansion, Bishop shoots Sinister
but it has no effect. Sinister claims to be Xavier's salvation,
and has a photo of the person responsible for recent events. The X-Men's
gold team defeats Caliban and Famine in Virginia, but cannot locate
Apocalypse. A hologram of Sinister encourages them to continue
tracking Apocalypse. Elsewhere, the MLF deliver Cyclops and Jean Grey
to Stryfe.


Continuity Note
Stryfe refers to Cyclops and Jean as "father" and "mother" of "what is
to come", dropping very large clues about his origin.


Gimmicks
This is part four of the X-Cutioner's Song crossover. It comes polybagged with a
Cable trading card.


Review
For the second time in three chapters, X-Force fights another X-team.
This could be tedious, but this issue manages to pulls it off.
X-Force had been building up to a confrontation with the other teams
for a while at this point, and if the X-Force characters are going to
be captured, it should happen in their own title. Greg Capullo does a
great job on the various X-characters of this era, and since X-Force
was at a clean start when the crossover began, you don't feel as if
any important storylines are being interrupted. It's fun to read and
so far the story isn't hard to follow. All crossovers apparently
require at least one hero-on-hero fight. X-Cutioner's Song gets it
over with fairly quickly while also paying off a long-running subplot.
At this point, this is a crossover that doesn't seem arbitrary and
pointless, which is more than you can say for most of them.
Posted by G. Kendall at 11:05 PM

I'm pretty sure I hadn't read the Cable mini-series when I first read this so I wasn't that familiar with Stryfe but even with his goofy outfit he seemed like a pretty cool villain. Mysterious dialogue and all. (I even got his toy when that came out, though I was never sure why they accessorized him with a spiky mace.)

You've also gotta love how Capullo outfits Cable with his entire armory on his back to the point where he shouldn't even be able to walk. I guess it would take a while for Liefeld's influence over how Cable was drawn to wear off. Even if Peterson does having him showing up with a lot less weaponry in the next issue. This storyline and his two-issue mini are what sold me on Cable when I was a kid. Finally acquiring New Mutants #87 was one of the proudest moments of my teenage years, embarrasing as that sounds. Even if he did become kind of a cliche he remains one of my favorite x-characters to this day which is probably why I have such high regard for this cross-over and its Cable-centric plot.