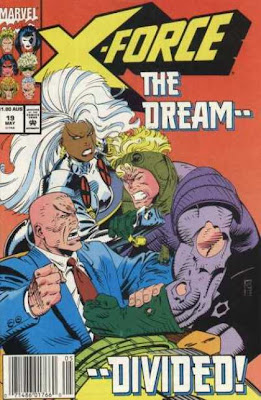 Summary
X-Force remain prisoners in the X-Men’s mansion, as Cannonball argues with Xavier for their freedom. Boomer spends her free time designing new costumes for the team, while Warpath and Siryn secretly make copies of the X-Men’s files. Cannonball finally convinces Xavier that they are adults and should be free to make their own choices. He reluctantly allows the team to leave. Meanwhile, G. W. Bridge quits SHIELD after being censured for Weapon Prime’s failure.

Review
It’s another quiet post-crossover issue (which means that only X-Men skipped one after X-Cutioner’s Song). After tying up Liefeld’s loose ends, this issue is a necessary step in establishing a new focus and direction for the series. Nicieza moves the series away from its past by giving the entire team new costumes, and by taking a few shots at the earlier issues (Warpath makes fun of his old shoulder pads; Siryn comments that she joined the team because she felt “dead inside” like the other members). Cannonball’s speech to Xavier implies that X-Force is going to find the middle road between Xavier’s, Magneto’s, and Cable’s methods. This isn’t a bad idea for a new direction for this series, but I don’t remember it going anywhere. A lot of his speech becomes moot when the kinder, gentler post-Liefeld Cable debuts. He doesn’t shoot a lot of people in the back at this point. This makes X-Force a less nasty book to read, but I think it loses a lot of its identity in the coming months. Eventually, the characters will just move back into the X-Men’s mansion, essentially becoming the X-Men under a different name. I do think the characters become more likable and the stories greatly improve during this era, but without their own mission or point of view, this spinoff doesn’t really offer anything unique. Once Generation X debuts as the new New Mutants, the series seems even more redundant.
Posted by G. Kendall at 8:50 PM

Just like Uncanny 297, young me loved this issue. That whole open hand/closed fist business blew my mind at the time.

I think this is the best issue X-Force ever had. And I do agree that they lost their direction once Cable came back in #25, but I don't think they became true junior X-Men under Loeb/Pollina. If anything, Loeb demonstrated just how much X-Force had to learn by comparing them to the veterans every month.

X-Force is my favorite X-Title of all time, and I try to back it up here...
http://digsyhasablog.blogspot.com/2007/03/in-defense-of-x-force.html