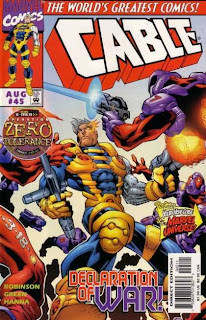 Moving Target Part One: No Escape

Summary: G. W. Bridge contacts Cable, warning him of a threat. During their conversation, news coverage of Zero Tolerance’s attack on the X-Men begins. Cable heads to the mansion and fights against Bastion’s soldiers. He rescues the mansion’s only occupant, Caliban, and encourages him to fight back against the soldiers.

Continuity Notes: During an extended monologue, Cable reveals that he helped Xavier build the mansion (I think he means, specifically, all of the hi-tech gear the X-Men use). He also says that Xavier taught him how to live in this era, and what being a mutant meant. This was an idea originally hinted at by Jeph Loeb, but is now made official.

Review: Cable has been without a direction for a while, so it’s hard to complain about the OZT crossover disrupting many storylines. In fact, Robinson still uses this issue to provide hints about some upcoming stories (someone in the Hellfire Club has a grudge against Cable, another character from Cable’s past has a connection to the Black Panther, Cable’s uncertain about his future with X-Force, etc.). Robinson obviously has no aversion to narrative captions and thought balloons, so even when Cable is fighting against Zero Tolerance alone, there’s still an effort to flesh out his character and add some depth to the scenes.

Cable’s long inner monologue brings us confirmation of a rather ridiculous retcon -- the idea that Cable and Xavier used to be friends. There’s really no way to make this work in continuity (Cable and Xavier clearly didn’t know each other when Cable first appeared, plus he always preached against Xavier’s pacifism, while Robinson acts as if Cable has always had endearing respect for Xavier), and I have no idea what it’s supposed to add. We don’t even need an explanation for the X-Men’s hi-tech equipment -- it comes from the Shi’ar. As for the technology they used in the pre-Claremont era, was anyone under the impression that it came from someone two thousand years in the future? It’s a ridiculous retcon, but I don’t recall anyone making that big a deal out of it, even though X-fans during this era had a reputation for loudly decrying continuity screw-ups (see the response to the original Psylocke/Revanche story, for instance). Was no one paying attention to Cable, as a character or a regular series, by this point? 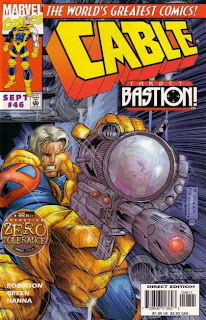 Summary: Cable leads Caliban to the Morlock Tunnels where he can escape. Cable returns to the mansion and takes out the group of soldiers blocking access to Xavier’s computer files. While downloading the info, he wonders if Bastion would target Cyclops and Phoenix’s families. He sends a mental message to X-Man, asking him to look out for their relatives. Cable escapes with the backups and destroys the computer lab. Suddenly, he’s confronted by Bastion.

Review: Just as straightforward action, this arc works okay, but running it over three issues is a stretch. This is one of the problems with crossovers; peripheral books are still stuck with the storyline after they need to move on because the main titles haven’t resolved the major conflict yet. Robinson adds some characterization to the fight, as Cable shares a goodbye with Caliban and reflects on his time with his newfound family while downloading the X-Men’s files. It’s handled well enough, but the Bastion cliffhanger is just a reminder that there’s still another month of this story to go.