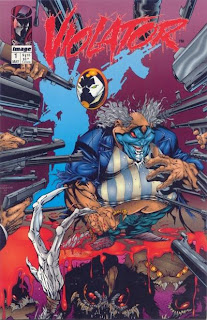 Summary: From Hell, the Phelbiac Brothers spy on Violator. Tony Twist’s men are attempting to kill Violator, but he escapes after a bloody fight. During the fight, a mobster’s head becomes attached to Violator’s arm. Violator heads to a local mall to find a saw to remove the decapitated head. There, he’s confronted by the Admonisher, a hitman contracted by Tony Twist. Fearing a human could kill their brother and embarrass the family, the Phelbiac Brothers arrive on Earth to kill Violator personally.

Review: According to the ads McFarlane later ran that year, this was the highest-selling comic of 1994. I’m glad an Alan Moore comic could be number one, but it amuses me that a book filled with guts, gore, and decapitations was the most mainstream product released in 1994. At this point, I’m not sure how seriously McFarlane expected people to take the gory elements of Spawn. He obviously wasn’t shy about blood-stained walls, dangling organs, or dismembered corpses, but was this supposed to be dark and scary or absurdly amusing? McFarlane later decides he’s doing serious gothic horror, but Moore knows how ridiculous all of this is. The Phelbiac Brothers spy on Earth by using human blood as an oracle, Violator punches through a man’s mouth and gets the head stuck on his wrist, Admonisher casually blows the heads off of Twist’s men, and a few of the bystanders to the carnage puke all over themselves. On the bottom of most pages, Violator is contorting his body “YMCA” style to match the page number. The Admonisher, clearly inspired by a certain Marvel vigilante and his legion of clones, wants to give his targets a “good talking to.” There’s a demon named “the Vacillator” who can never make up his mind. This isn’t supposed to be taken seriously. Moore’s later Image work is also pretty comedic, but I don’t think he ever matched the ridiculousness of this miniseries. Bart Sears’ extremely detailed art is appropriate for the blood bath, as he seems to enjoy drawing every tiny speck of gore. Moore also seems to have kept Tom Orzechowski in mind, since all of the Phelbiac Brothers have their own distinctive word balloons, and he’s going for the big, dramatic sound effects this time. It’s gross-out humor with great production values and Alan Moore jokes, which is really the best you could hope for in a Violator miniseries.

You can get the artwork to a point of such ingenuity and beauty that you total forget about anything in the story. Violator is a great example of this.