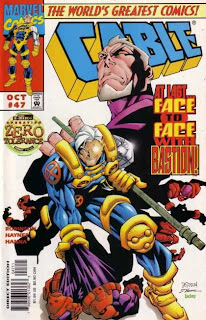 Summary: Bastion reveals to Cable that he’s stolen Xavier’s Cerebro files, and will terminate the relatives of the mutants if Cable attacks him. More of Bastion’s soldiers attack, but Cable fights them off and is able to draw his gun on Bastion again. Cable telepathically overrides the soldiers’ armor defenses and erases their memory of the X-Men’s mansion. They wander aimlessly out of the mansion, while the strain of using his powers causes Cable to black out. Bastion tries to shoot Cable, but learns Cable’s gun is empty. Cable later explains to G. W. Bridge that Bastion disappeared after emptying the mansion.

Review: Cable’s OZT tie-in wraps up, and the final chapter shows a few signs of editorial intrusion. The dialogue suddenly becomes extremely stilted in places (“You have caused too many innocents such woe already with your persecution of mutantkind…”), and much of the exposition feels awkward. I know Robinson’s reputation as a writer has taken a hit recently, but this reminds me of the clunkiness that often showed up in comics edited by Mark Powers during this era. The plot feels like it’s been partially rewritten as well, as Bastion’s threat to track down mutant family members is just forgotten, and the villain just decides to leave at the end of the story. Who cares if Cable’s gun is out of bullets? Isn’t Bastion a literal machine obsessed with hunting mutants? Why wouldn’t he at least keep Cable captive, just as he kept the X-Men prisoner? It’s a disappointing ending, and the three issues dedicated to this story amount to essentially nothing.

Years later, Bastion’s origin is revealed in a Cable annual. I wonder if that story should’ve appeared during this arc instead. Rather than teasing Bastion’s origin past the point where anyone cared, the actual crossover could’ve revealed his secrets. Placing it in Cable would’ve reaffirmed the title’s place as an “important” book, and justified the three issues dedicated to the tie-in.

Actually, that stilted dialogue reads exactly like James Robinson's writing style. STARMAN was full of this stuff back then, and while it worked in that book when he tried to do it in other titles it came off as *really* weird and forced.