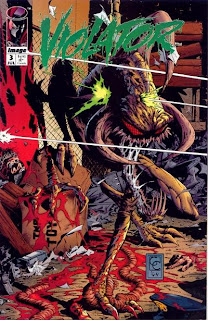 Summary: Violator tricks Spawn into restoring his demon form. After Spawn transfers his magic into Violator, he reneges on the deal and kicks Spawn off the roof. The Admonisher continues his attack on the Phlebiac Brothers, as the revived Violator returns. The brothers run in terror, opening a portal to Hell. Meanwhile, Violator discovers Tony Twist and his assistant Alberto are within the forcefield. Twist tricks Violator into believing Alberto is really him; then Violator tricks the Phlebiac Brothers into believing Alberto is Violator in his clown form. Admonisher chases all of them into Hell. When the brothers disappear, the forcefield dissipates.

Review: I remember Bart Sears telling Wizard that he didn’t draw the final issue of the series because Todd McFarlane decided he wasn’t working fast enough. Greg Capullo isn’t as detail-oriented as Sears, but he can draw demons and gore quite well. This doesn’t look as labored as the previous issues, but it’s more energetic and it’s a nice example of Capullo’s “in-between” style, before his work grew more exaggerated. Like the previous issues, it’s an over-the-top comedy story with a few twists thrown in. The running joke that demons think all humans look the same is one of the best of the series, along with Vaporizer’s cry when running from Admonisher (“Let’s get the heaven outta here!”). McFarlane always envisioned Violator as a comedic character, even though he didn’t seem able to actually make him funny. Moore solves that problem very quickly, and gives the teenage audience all of the violence and gore of their dreams.

You could see the change in this final installment, unfortunately.