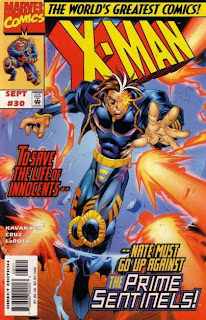 Summary: X-Man recovers at the home of the three mystery women. He suddenly receives a psychic message from Cable, asking him to protect Jean Grey’s parents and niece and nephew from Zero Tolerance. Cable has also contacted the Greys, who have traveled to X-Man’s Soho home. They’re joined by Roust, a boy who’s come to warn X-Man about another one of Abomination’s followers. X-Man arrives and uses his psychic powers to trick the Prime Sentinels into believing the Greys are dead. Roust disappears, leaving X-Man to wonder what his warning was about.

Continuity Notes: Cable’s conversation with X-Man is supposed to be the same one we saw in Cable #46. However, the dialogue doesn’t match up at all, a fact dismissed with an editorial note that reads “telepathy is all in the mind’s eye of the beholder.” Later on, Bastion wonders if X-Man could be the “Otherseed.” I assume this ties into all of that Cable-as-messiah nonsense, and it’s a hint that Bastion is from the future.

Review: X-Man gets an OZT tie-in too, although it seems like this was a last minute addition. The cover does reference the Prime Sentinels, but it looks like someone forgot the OZT crossover tag. The previous issue was clearly setting up the three mystery women, yet they’re dismissed after a few pages once X-Man receives Cable’s message. Cary Nord only draws the pages with the three women while Roger Cruz handles the rest of the issue, which is probably another sign the original plot was jettisoned (I wonder if Cary Nord finished an entire issue of X-Man that was never published). This issue would have us believe that Bastion wants to kill not only mutants, but their family members as well. He did use this as threat against Cable, but it doesn’t match up with his actions in any of the other titles that I can recall. Connecting X-Man to the Greys prevents this from feeling totally arbitrary, but this is clearly a wasted crossover issue.

I swear, every issue of X-Man you review should entitle you to some sort of blogging Purple Heart. This shit is nasty, and I say that as someone who bought these when they first came out.

Although I think even X-Man is preferable to X-Factor from this era.

Just think, this book went for 30+ more issues before someone decided to revamp it.

Ah, here we are at the only post-AoA issue of X-MAN that I own. Reading your reviews makes me glad I made the decision NOT to follow that title when it was running, lol.