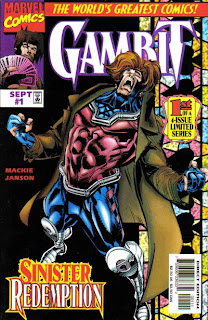 Summary: In Miami, Gambit steals the Cross of Redemption from a Cuban gangster. A vision of Tante Mattie suddenly appears, asking Gambit to do “the Lord’s work.” Gambit refuses, then tries to escape the gangster’s security. While running past the beach, Gambit is drawn towards a nude woman emerging from the water. Enthralled, he wraps her in his coat as the men continue to chase him. They gun down Gambit, who falls into the water. He has a vision of the woman as an angel as he apparently dies.

Continuity Notes: Good luck placing this one in continuity. Gambit says he’s doing an old-fashioned theft to ground himself after his outer space adventure. An editor’s note points towards Uncanny X-Men #342-#344, which is apparently as long as that storyline was supposed to last. Instead, it dragged on until issue #350, and ended with Gambit being left for dead in Antarctica. My No-Prize explanation is that Gambit was actually referring to another space adventure we never saw, or perhaps the story is set after he escaped Antarctica but before he rejoined the X-Men.

Production Note: The indicia lists this as Gambit vol.1, no. 1, which shows someone had a short memory.

Review: The first Gambit limited series came out of the X-Men’s 30th anniversary event, during the height of the character’s popularity. I didn’t think it was particularly great, but I dutifully purchased every issue and accepted it as a legitimate part of X-continuity. Four years later, I have a vague recollection of flipping through one issue of this series and quickly placing it back on the stands. Not only had Gambit’s popularity begun to cool, but the utterly insane number of X-related miniseries and one-shots pumped out of various Marvel offices had left the spinoff material toxic. Even if I was a full-grown adult with a decent paying job, I couldn’t have justified buying all of the X-product shoved out between 1996 and 1998. I still liked the X-Men and didn’t even consider buying over half of this stuff. Who exactly was the audience for all of these books?

As quickly as this miniseries sunk into obscurity, there is an odd significance to it. A rumor began to circulate (either through Wizard or one of Marvel’s hype pages) that a character debuting in this series would have major repercussions for the Marvel Universe in the future. I’m assuming the character in question is the female angel introduced in this issue. She apparently was going to tie in with the “Marvel Crisis” Warren Ellis was writing, which would’ve served as a Marvel continuity reboot towards the end of the millennium. Marvel got cold feet about the project (but still went ahead with their misguided plan to rewrite Spider-Man’s origin with Spider-Man: Chapter One), and Ellis’ original plans apparently made their way into the Ultimate Universe years later.

The starting place for this story seems to be, of all things, the ‘90s X-Men animated series. The “Nightcrawler” episode established Gambit as an atheist, most likely to play off the other X-Men who were open to Nightcrawler’s beliefs. Maybe it’s a coincidence, but Howard Mackie is giving us a Gambit who’s suddenly hostile to faith; declaring that he doesn’t believe in redemption, or “Him,” and is going to do what he wants whenever he wants to do it. So, of course, after he steals a cross, his Catholic godmother appears, demanding he do a mission for God, shortly before an angel washes up on the beach. Not exactly subtle, but this is a Howard Mackie comic (I’m sure I’ve said those words before). At least there’s a clear idea for a story so far, which is more than X-Factor could muster for more than five pages at a time. Gambit’s feelings on redemption are fertile ground for a story, especially in light of his “secret shame,” which is going to be revealed a few months later in Uncanny X-Men #350. I don’t have high hopes that the theme will be explored well, but I’m willing to be surprised. And Klaus Janson is the artist, so this miniseries automatically looks better than the rest of the ancillary X-clutter.

Where did you find out information about this "Marvel Crisis"?

I saw it mentioned briefly on a message board, but that poster thought it became Planetary rather than (part of) Ultimate Marvel.

Still not sure why Howard Mackie was the go-to guy for solo Gambit (and Rogue) action back then... But at least, unlike when he wrote the first Gambit mini, and the Rogue mini, he was actually on an X-book at this time!

Rich Johnston talked about the original plans in this column:
http://www.comicbookresources.com/?id=15142&page=article

Huh. I hadn't heard about the "Marvel Crisis" either. Very cool, thanks.

I had the same reaction to the two Gambit miniseries as you: