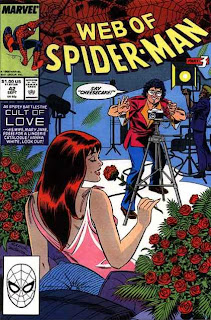 The Plot: The Teacher, who recognizes Peter as an imposter, hands him his Spider-Man mask and asks him to leave. Spider-Man decides that Betty is happy with the Students and he has no right to intervene. Flash Thompson angrily disagrees, and learns the location of the Students’ farm from a policeman friend. With the help of Reverend Tolliver and a group of armed men, Flash abducts Betty.

The Subplots: MJ is unwilling to model lingerie until she consults with Peter. When he only makes a quick phone call after twenty-four hours away, she goes ahead with the assignment. Spider-Man learns one of the cultists is named Tracey, the same name as Kate Cushing’s sister. Kate is determined to find out if this is her sister. After consulting with Dr. Druid, Spider-Man learns how the Teacher could fake miracles.

Approved By The Comics Code Authority: Obviously, MJ is wearing small robes and lingerie during the issue. It’s pretty tame when compared to Todd McFarlane and Erik Larsen’s future work, though.

Miscellaneous Note: Unless I’ve missed something from a previous issue, this cover marks the beginning of a tradition from this era of Spider-Man. Can you find what’s hidden in the cover?

Review: Following last issue’s revelation that the Teacher might not be a maniacal villain, Peter David explores the implications. Peter’s convinced that Betty’s making a mistake, but she seems happy and he doesn’t feel justified in making decisions for her. Flash disagrees, and deals with the situation as impulsively and dangerously as could be expected. Although no one really thinks that the Teacher is going to turn out as a legitimate healer or religious leader, David does a good job of selling him as rather benign. Not only does he peacefully ask Spider-Man to leave (after not exploring his secret identity), but Spidey also begins to wonder if the man does have healing powers. As he points out, he’s seen much stranger things in the Marvel Universe, and it’s not impossible that someone with healing abilities could’ve established a religious order. Regarding the subplots, I’m not sure if MJ modeling lingerie serves a purpose much higher than the “cheesecake” advertised on the cover, but I like the way David handles their relationship and how it’s impacted by Peter’s life as Spider-Man. 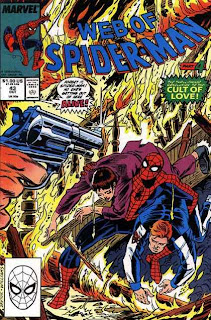 The Plot: Peter is called to Flash’s apartment to participate in Betty’s deprogramming. He reluctantly agrees, and with Reverend Tolliver’s help, Betty makes progress. The Students of Love break into the apartment and abduct Peter, Flash, and Betty. At their farm, Student Bruce accidentally starts a fire. Peter changes into Spider-Man and leads his friends to safety. The Teacher offers to stay behind and help Bruce escape, but they’re both killed in the blaze.

The Subplots: Aunt May sees MJ’s test shots for a lingerie job. When MJ realizes how upset May is, she burns the photos. Kate Cushing finally meets the Student Tracy, who doesn’t recognize her. She tells Peter that this isn’t her sister, before turning away in tears.

Approved By The Comics Code Authority: MJ takes a shower, and is conveniently covered by a tastefully large sponge.

Review: This was the only chapter of this storyline I read as a kid, and I think it’s a testament to the creators’ skills that I could read this at eight-years-old and pick up on virtually everything in the story. Like the previous issues, David manages to weave the action scenes with some entertaining moments with the supporting cast (Aunt May threatening to “dock” MJ if she ever embarrasses Peter is a classic), which is really what I’m looking for in a Spidey comic. The entire arc has been tightly plotted, and the only real issue would be Flash’s moronic decision to deprogram Betty in his apartment (since the Students know where Betty’s friends live). This is slightly covered by Reverend Tolliver reminding him of what a dumb idea it is, but that doesn’t explain why Tolliver went along with it.

Of course, now that the Teacher has a name to attach to Spider-Man’s face, he has to die. It’s the law. I like the way Peter David refuses to cop out and make Teacher an outright villain until the very end, when he finally pulls a gun on Spider-Man as his entire operation falls apart. Further confirmation that he’s a fraud comes when he’s prepared to leave Bruce to die, which indirectly leads to his own death when Bruce holds him down as debris falls from the ceiling. Kate Cushing’s story has a gloomy resolution, as we learn that the Student Tracy doesn’t recognize her at all. Whether or not this is someone else, or if Tracy has been brainwashed past the point of recognizing her sister, is intentionally vague, but Kate’s reaction is a big clue that this is her sister. As Kate tells Peter, “Not everyone gets happy endings.” This always stuck with me, since it’s the kind of simple, sad resolution I wasn’t used to seeing in kid-friendly entertainment. I hope no one’s ever done a sequel to this story and ruined this ending.

Alex Saviuk’s work throughout the arc shouldn’t be overlooked. As I’ve mentioned before, he draws Spider-Man and the supporting cast perfectly on-model, giving every character their own distinctive face, body, and posture. His page layouts are just as clean and attractive as his character designs, as he often deals with pages that exceed eight panels, but never draws a cramped page. He knows how to structure the page and can sell drama in even the tiniest panels. His layouts on the deprogramming pages are particularly great: 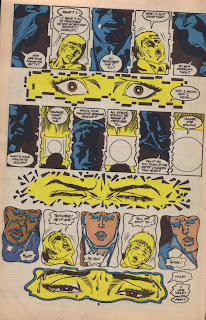 How many modern mainstream comics would lay out that much information on one page, and do it so seamlessly? Saviuk might not have a reputation as the most daring artist to ever touch Spider-Man, but I think his work perfectly suits this storyline and does a lot to enhance David’s story. All around, this is good work that deserves another look. How about a “Cult of Love” trade paperback, Marvel?

spider-logo bottom right in the leaves. a la todd?

I know Todd used to hide Felix heads, but I didn't know about the spiders. Is there one on the cover of 43 (besides the one on Spider-Man's chest, har har)?

Hmm, all those years of reading Spider-Man comics, and I never knew about the spider-easter egg! Did all the artists do it?

By the way, I agree with you about Saviuk's "on-model" art. Just for example, on that page you posted, it's plainly which one is Flash and which one is Peter, even though you can't make out their features very well.

All of the artists did the hidden spiders, up until 1992 or so. Sometimes they're impossible to find; if the cover of #43 has one, I've never seen it.