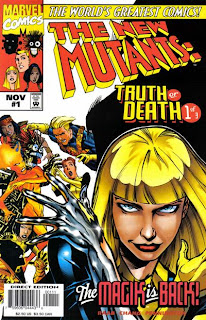 I guess enough years had passed for New Mutants nostalgia to kick in by 1997. Most of the one-shots and limited series cranked out of the X-office during this era were blatantly unnecessary, but reviving the original New Mutants feels like a credible start for a miniseries. The story has the New Mutants of the later Claremont issues (Mirage, Sunspot, Cannonball, Wolfsbane, Cypher, Warlock, Magma, and Magik) training in a Danger Room simulation of Limbo. Magik is visited by a mysterious robed figure, who offers vague hints about her future. After a game of truth or dare, Magik decides to teleport to the future to learn her fate, and the New Mutants tag along. In the present, the surviving New Mutants (and Douglock, who snuck along with Wolfsbane) return to the mansion for a reunion. They run into their teenage selves, and when Douglock stupidly blurts out that Magik should be dead, she runs away. She’s comforted by the robed figure, who reveals himself as her brother, Mikhail Rasputin.

Ben Raab did a lot of work on the peripheral X-titles in the mid-90s, some good and some bad, but what this issue has going for it is Raab’s obvious affection for the characters. Right down to which character had a crush on the other (which always seemed to be changing in the early issues, just like high school), Raab seems to know the New Mutants. He even acknowledges that Sunspot and Karma have never met Douglock, which is a moment a lot of writers would’ve ignored (I forgot that Sunspot had mysteriously vanished during Douglock’s early appearances, although it seems like he would’ve at least known about Douglock by now). Kitty Pryde’s cameo in the flashback scenes also feels like a moment from the original issues, as she tries to reassure Illyana after her first encounter with Mikhail. Using Mikhail as the villain uses continuity to the story’s advantage, as we’ve never seen Magik interact with her brother before. Of course, Mikhail suffers from indescribably powerful (and vague) abilities and motivations that usually don’t go further than “he’s crazy,” so having him as the villain might raise its own issues. 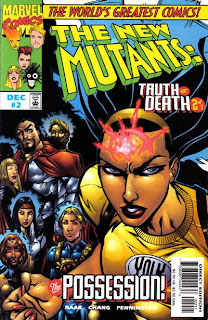 Mikhail returns with Magik, explaining that he’s developed another new use of his powers -- time travel. He contacted Magik in the past and planted the idea for her to travel to the present, where he hopes to prevent her death. The adult New Mutants are suspicious, and debate over whether or not reality should be altered to save Magik’s life. Perhaps because this is only a three-issue mini, Raab rushes through their conversation and has several members matter-of-factly state that reality shouldn’t be altered, period. I would expect the heroes to eventually come to that conclusion, but they’re reaching it rather quickly and unemotionally.

Even more ridiculous is their decision to charge into battle against Mikhail and the teenage New Mutants, all based on the assumption that Mikhail has “something to hide.” I can understand the appeal of pitting the grown team versus the teenage team, and the fight scene does have its moments, but Raab isn’t giving the characters enough motivation for these actions. If one side was going to fight the other, it seems like the impetuous teenagers would’ve been the first to strike, anyway. In the end, Karma (who’s leaning towards resurrecting Magik, unlike most of the adults) turns against her team and joins Mikhail. Karma puts the older New Mutants to sleep, as Mikhail begins the next phase of his plan; only now the teenage Wolfsbane is having doubts. Like I said, the character work is enjoyable, but it feels like a lot of space has been wasted on a hero vs. hero fight with a shoddy motivation. 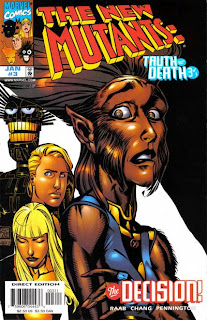 Using advanced technology, Mikhail claims that he’s successfully removed the genes that will lead to Magik’s future Legacy Virus infection. Cypher is suspicious, and later checks Mikhail’s records for verification. Aside from learning that he’s dead in this time period, Cypher discovers that Mikhail actually infected Magik with the Legacy Virus. Simultaneously, the adult New Mutants are freed with the help of the teenage Wolfsbane. Mikhail prepares to fight them, until Cypher arrives and reveals the truth. Mikhail explains that he’s infected with the Legacy Virus, and that his plan was to infect Magik with the virus while she had her magical powers, hoping that her magic could create antibodies. His plan exposed, Mikhail teleports away, although he doesn’t know yet if his plan worked, and none of these characters are really a threat to him anyway.

Mikhail’s exit is supposed to be an emotional departure, after Magik rebukes him when he asks for her forgiveness. This isn’t a total copout, as Raab humanizes Mikhail to the point that he does seem legitimately remorseful, and his claim that he’s creating a cure to help all of mutantkind seems somewhat genuine. Of course, he’s now the man responsible for infecting his kid sister with the Legacy Virus, and his gamble that Magik could beat the disease didn’t pay off. Now that everyone’s appropriately weepy, the two teams say goodbye as Karma removes the teenagers’ memories of these events. Raab’s been hinting throughout the mini that Karma’s psychic powers are developing rapidly, granting her new abilities. I guess the new powers were always intended to erase the teen New Mutants’ memories of the events, thus explaining why none of the characters remembered meeting their future selves. Well, if the X-books would’ve stuck to the “official” rules of Marvel time travel laid out by Mark Gruenwald, Raab wouldn’t have needed to go through the trouble. Time travel is supposed to create new realities automatically, which means this story’s claim that Mikhail is responsible for Magik’s death in Uncanny X-Men #303 is dubious at best, and a new reality would’ve been created by this time travel adventure.

So, the mini has a few plot problems (and some atrocious dialogue, like “Time t’kick it old school!”, begins to crop up in the final issue), but I found myself enjoying it. Raab obviously likes the New Mutants, and he’s constructed a story that uses the characters rather effectively, so it’s hard to totally dismiss the book. I’m also happy to see Bernard Chang, a penciler severely underused during this era, show up as artist. Chang’s drawing in a slightly angular, “chunky” style that resembles a more restrained Ed McGuiness, and it looks great. The original New Mutants title had its fair share of left-of-center artists (like Kevin Nowlan, and the kids just loved him), so he’s a fitting choice for the series. I could see Chang drawing the original series in this style; although I imagine it would’ve been printed with terrible flexographic printing on a slightly yellow paper stock.

That's a great review of this series. I've been enjoying the hell out of your reviews of the X-Men 90's material, and I always liked this mini-series particularly.

It had the New Mutants, which are characters I've always liked, it had Bernard Chang's art (completely agree with you regarding how underrated he was) and it was one of the best limited series Ben Raab wrote. It's one of the very few books from the time that survived the various cullings in my collection over the years. I think I'll re-read it over the weekend! :)

I don't know. I think Raab did his research well. The one thing that bothers me is his skills to use this knowledge: his writing abillity. The characters don't sound to me like they are real, like they are natuarly talking. It's as each character has to display such and such information that will hint to their past appearence in the comics... Everything in the dialogue is darn obvious, like it's nothing but exposition. It's hard for me to read this and not compare it to the lively fellows of the Claremont era.
Also, is it just me, but the fact that Rahne has long hair in this era is irritating. I might be wrong, but I seem to remember from the beggining of the New Mutants that she said her hair isn't growing no matter what. I exceppted that it grew longer when she turned into werewolf form in Peter David's run, but the next artists just reversed her to human form with similar long hair period... It doesn't suits her as a character. She isn't suppose to be that "girly girl", me thinks. :/