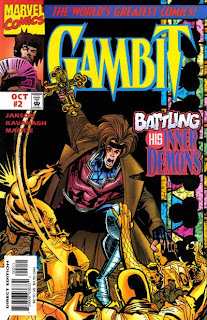 Summary: Gambit is rescued by Vatican agents Marcelo and Katrina. Gambit grows close to Katrina as he recovers, unaware she's in training to become a nun. Marcelo searches the city for the angel, which Gambit has named Anielle. A woman named Sibyl suddenly enters, commanding what appears to be a pack of armed zombies. Marcelo is killed in the battle, as Gambit escapes to protect Anielle. Sibyl follows, revealing her demonic wings. Gambit and Anielle flee inside a church, where the mysterious Oliver Stoker suddenly enters.

Continuity Notes: Katrina refers to Tante Mattie as “Mattie Baptiste,” and intimates that they’re all a part of an organization known as the Grigori. Gambit questions if they’re really descendants of fallen angels, as biblical apocrypha states. Katrina doesn’t give much of an answer.

Review: Look, Terry Kavanagh has arrived. I’m not sure how the script was divided between Mackie and Kavanagh, but this flows a little easier than most of their individual works from this era. With maybe one or two exceptions, Gambit’s phonetic accent is even tolerable. The big exception is Gambit explaining what the Grigori are through that insane accent (“Angels from the dawn o’ Genesis, fallen in de sunderin’ o’ Heaven. Not heavy enough wit’ sin t’crash t’rough de Earth int’ de burnin’ abyss wit’ their darker brethren…”). Like the first issue, this has non-believer Gambit thrown into an adventure with characters out of some sort of Catholic fan-fiction. Most of the mysterious characters with cameos in the first issue are fleshed out here, which is one advantage of forcing these writers to work within a limited series format. There’s no “we’ll get around to revealing that shadow figure” or “the mysterious conspiracy will be explored in detail later” nonsense if you only have four issues to deal with. Gambit also receives some character work, as the issue opens with an extended monologue during his near-death experience. He’s reflecting on his past sins and his place in the darkness, which wasn’t anything new for the character, but the sequence works surprisingly well. Klaus Janson’s moody art helps a lot, as we see Gambit swimming through darkness, emerging in his own grave, and fighting against the zombies that want to drag him back down. Gambit’s previous angsting probably would’ve been less annoying with the proper visual accompaniment.