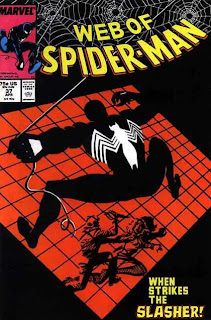 When Strikes the Slasher!

The Plot: Numerous fashion models have become victims of the mysterious Slasher. Dakota North takes the case, as Peter worries for MJ’s safety. Backstage at a show, MJ’s friend Elyse receives flowers from her obsessed fan, Harvey. Desperate for Elyse’s attention, Harvey hires an actor to pose as the Slasher, so that Harvey can “save” Elyse. When the imposter targets MJ and Elyse, they run for safety. Dakota North and Spider-Man apprehend the imposter, but MJ is soon the target of the real Slasher, the deranged and envious Elyse. Spider-Man stops Elyse in time, as Harvey realizes he has a lot to learn about love.

Forever Young: Peter chides himself for having an “adolescent inferiority complex” after he learns that MJ has paid his quarterly tax bill.

Review: Gerry Conway is now handling Spectacular Spider-Man, so we’re back to fill-in mode. Owsley and Geiger did two earlier issues, and were apparently supposed to be the regular creative team for a brief period. I wonder if this issue was originally supposed to run with their other issues, and later went through some rewrites to make it fit in with the post-wedding status quo. That would fit with Owsley/Priest’s claims that his scripts were being rewritten, although the marriage plays such a major role in this story it’s hard to imagine it being written before the wedding.

Because this is a 1980s Jim Owsley comic, the superhero action is limited, the tone is often dark, and the villain is a deranged serial killer. There is some humor, and a happy ending, so it’s not as bleak as some of the Spidey material from his stint as editor. There isn’t a lot of room to sell the mystery, but I like the way Owsley hints that the random stranger Howard hired to impersonate the Slasher might actually be the killer. That’s the twist ending you normally get in comics, so the revelation that he’s innocent is a good reversal. Peter is also handled well, as he continues to deal with his insecurities over MJ’s success. Why exactly Dakota North is in this issue is beyond me, but Owsley seems to enjoy writing her and her hapless brother/assistant, also.

Spider-Man artists were sure able to get some amazing cover images out of the black suit. I've often wished they would have kept it as a part-time costume like it was in the mid-80's, rather than dusting it off for a one or two issue appearance every decade or so to remind us that it still exists.

It's amazing to me to think that there's a whole generation who probably associates that outfit with Venom rather than Spider-Man. Even though Venom has worn it far longer, I still think of it as "the black Spider-Man costume" rather than "the Venom costume".

I agree. I know I'm a different generation to those that subsequent animated adaptations, movies etc have been aimed at, but it always slightly gets to me that the black costume, if it is introduced, is always just as a set-up for the introduction of Venom, and, as soon as Spider-Man loses the alien costume, he goes straight back into the red and blues for good, as Venom has, by now, shown up.
I suppose I'm just being blinded by nostalgia, but it was kind of cool the way that, for over three years, Spider-Man either occasionally or exclusively wore the cloth black costume, and there was no baggage attached to it: it was just an alternate look for the character, nothing more, nothing less. The fact that I was blown away by it, aesthetically, is neither here nor there...