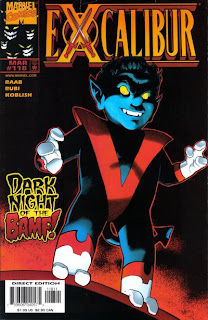 Summary: An army of Bamfs kidnaps Lockheed and creates havoc on Muir Island. Meanwhile, Meggan tells Colossus that they can’t be friends because she’s uncomfortable with his feelings, and Peter Wisdom demands Shadowcat tell him why she’s avoiding him. Eventually, the Bamfs make their presence known and attack the team. From the shadows, their master Nightmare enters.

Continuity Notes: Shadowcat feels awkward around Wisdom due to the crush on Rigby she developed in the Kitty Pryde: Agent of SHIELD miniseries. The original Bamfs were products from Shadowcat’s imagination that appeared in the ‘80s Nightcrawler miniseries.

Review: After months of buildup, Lockheed’s shadowy tormentors are revealed. I don’t know if the readers really needed to wait six months to learn that they’re Bamfs, but the little demons are fun. Much of Raab’s run has been pretty dull, so I’m more than happy to see a threat that totally comes out of left field. And while Rubi still struggles with human characters, his cartoony style actually suits the Bamfs quite well. While Raab builds up the Bamf story, he touches base with some of the ongoing romantic entanglements, which doesn’t work as well. Kitty wants to be with someone younger and more like herself, while Colossus suspects that Meggan is pushing him away in order to avoid her own feelings. If the characterizations didn’t feel so flat, these scenes would’ve had more impact, but Raab’s scripting is usually too stiff to really do convincing soap opera material. 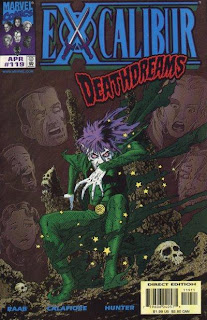 Summary: Nightmare plays on the team’s subconscious fears, but is unable to manipulate Peter Wisdom’s dreams. After already dealing with his internal shame, he’s able to stand up to Nightmare and defend his teammates. When Wisdom reveals each member’s true heroism, Nightmare is forced to retreat.

Continuity Notes: Nightmare says he recruited the Bamfs from the “Well at the Center of Time,” last seen in the Nightcrawler miniseries. The Bamfs targeted Lockheed because they’re jealous of his relationship with Kitty. Before leaving, Nightmare says a “mutual friend” will be interested in what he’s learned about Excalibur.

Review: It’s a “Give Each Member a Dream Sequence” issue, as Raab explores the hidden anxieties of each member. Nightcrawler is afraid of what can happen to Professor Xaver in custody (as this was written during the two-year period Xavier was being held post-Onslaught), Colossus sees visions of his dead family, Meggan worries Captain Britain wouldn’t love her in her true form, Douglock questions if he’s ever broken free of the Phalanx, and Kitty fears she was cheated out of her childhood and can’t handle a serious relationship. There’s nothing really unexpected here, but Raab’s delivery is competent enough. Putting Peter Wisdom in the unlikely role as the team’s defender is a good choice, as it emphasizes how far he’s come since joining Excalibur and shows that even a cynic can see the team’s true heroism. His accent is even tolerable this time around, thankfully.