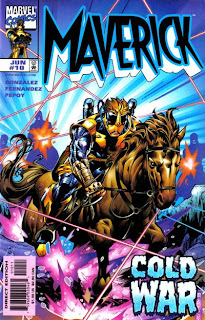 Summary: Maverick awakes in Russia, where Ivan the Terrible is waiting. While being escorted to a dungeon, Maverick escapes and steals a horse. He’s forced to surrender when Ivan threatens a young boy. Later, Ivan meets with AIM representatives and backs out of an arms deal. When they leave, Ivan sends Sickle and Hammer to follow the AIM agents. They’re joined by Ivan’s new hire, Omega Red.

Continuity Notes: The body of Etta Langstrom (the scientist who attempted to brainwash Maverick in issue #2) is in the dungeon. Ivan also breaks the fingers of one of his mistresses when she accidentally interrupts his conversation with Maverick.

Review: I don’t think you can blame Jim Cheung’s covers for Maverick’s short run. Most of them are strong attention-getters, with appropriately vivid colors, and this is one of my favorites. And what about Maverick’s daring horseback escape? It’s literally one page of the story. Gonzalez seems more interested in having Ivan strut around for a few pages and remind us of how evil he is. Maverick barely has anything to do, and the action scene he’s given is too brief to be effective. The Ivan vs. AIM subplot does have potential, though. I’ve always enjoyed villain vs. villain conflicts.

Summary: Chris sneaks into Dr. Keller’s office, disguising himself with the energy that surrounds his electric powers. His powers snuff out while fighting the gang, however. Lying on the floor, Chris can no longer protect his identity.

Review: Two of the five pages in this backup are spent on recapping the previous chapter, making this even more flagrant filler. The story doesn’t even end here, which means it’s going to be stretched out into three issues. Leo Fernandez’s art is still clean and attractive, though, and I don’t mind him as a fill-in for Cheung. 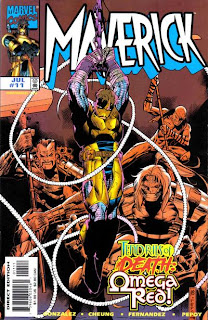 Continuity Notes: Maverick says he knew the original Red Guardian, Alexi Shostakov, personally. The new Red Guardian claims to be an independent hero who wishes to inspire the disheartened people of Russia. While reading Ivan’s files, Maverick learns that Major Barrington was innocent of the charges made against him during Dr. Langston’s brainwashing.

Review: Maverick only has one issue left, so it’s time for a few plot threads to be resolved. In a quickie scene, the hero learns that his mentor Major Barrington was never involved with his evil ex-wife and he shouldn’t have questioned him earlier. Well, yes, Maverick. Allegations the villain makes about someone while brainwashing you probably aren’t true. This was a silly subplot in the first place, but letting it drag on for almost a year and then resolving it in a way that just reinforces how dumb the protagonist has been…that wasn’t the best way to go. Ignoring the ridiculous subplot, the main story makes decent progress. After a rather dull issue, the action is amped up this time, so Cheung is given some cool things to draw. I’m not sure why exactly a new Red Guardian is introduced, other than the fact that the story takes place in Russia, but Cheung also has a nice interpretation of the character.

Summary: Before the gang can learn Chris’ identity, they’re attacked by a groggy Dr. Keller. Chris’ powers return long enough for him to defeat the teens. After the gang is in custody, Chris apologizes to Dr. Keller.

Review: Three issues. This lugged along for three issues. A total of fifteen pages were wasted on Chris going to the doctor and stopping a teenage gang that happened to show up. And it took three months to get to the conclusion. Can you imagine if an annual backup was needlessly padded out and serialized over the course of several issues? That’s essentially what we have here. I realize the decision to cancel Maverick most likely came before these backups started, but surely this flagrant use of page-killer didn’t help sales.