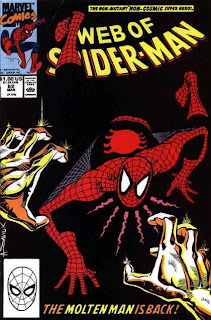 The Plot: Peter Parker learns that Mark Raxton, the Molten Man, is extorting $10,000 from his stepsister, Liz Osborn. Fearful of Harry’s reaction, Peter offers to speak to Raxton while MJ, Kristy, and Liz keep Harry busy. As Spider-Man, Peter faces Raxton in the Osborn’s apartment. When he realizes Raxton is actually innocent, he returns as Peter Parker and takes him to meet the Osborns. Learning that Raxton only wanted a loan, Harry offers him a job at his factory.

The Subplots: Spider-Man is uncomfortable with the Daily Bugle’s new pro-Spidey bias, although he is selling more photos than usual. Later, Peter locks a city inspector named Edna Gortch in the closet when he senses Molten Man is approaching. He forgets to let her out when the fight is over.

I Love the (Early) ‘90s: When Kristy laughs at MJ’s old modeling photos, MJ warns that she’ll blush when she sees photos from her “junior league Paula Abdul” phase.

Review: And now we’ve reached Molten Man’s reformation, perhaps the only reformation from Gerry Conway’s run that stuck around for a while. As I’ve mentioned before, Conway is quite skilled at creating sympathetic characterizations, so Molten Man actually does come across as a genuinely repentant guy who’s easy to root for. He’s still pretty vicious in the fight scene, though, as the barely reformed villain gets “carried away” and has a blast locking Spider-Man inside a refrigerator and dropping an elevator on him repeatedly. The rest of the issue focuses on Spider-Man’s new role as “New York’s Favorite Superhero,” which is an amusing change of pace. Spidey doesn’t feel comfortable signing autographs, and all of the newfound adulation just makes him paranoid that the other shoe is about to drop. This storyline doesn’t lead to much of a conclusion, perhaps because it’s only resolved as Conway writes his closing issues and dutifully puts the status quo back in place, but I always liked Spider-Man’s discomfort with any form of praise. This issue’s opening sequence, which has Spider-Man searching the sewers for a mysterious “Wendy,” was also one of my favorite scenes as a kid.

I recently re-read lots of my Saviuk era WOS issues, and that guy's stuff STILL blows me away!