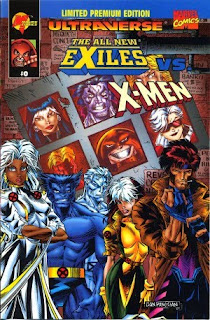 Summary: The X-Men use Gateway’s teleportation powers to follow Juggernaut, who’s disappeared from this reality. They find him in another world, where he’s joined a team of reformed villains named the Exiles. When Exile Reaper tries to escape to his reality through Gateway’s portal, he unwittingly unleashes the Firewalker monster. The X-Men and Exiles put aside their differences and defeat the monster. Realizing that Firewalker only feeds off the Exiles’ energy, Juggernaut decides he can’t risk awakening it with another trip though alternate realities. Back at the mansion, Storm tells Xavier that he would be proud of Juggernaut’s evolution.

Continuity Notes: Why exactly the Firewalker only feeds off the energy possessed by Exile members isn’t explained. Gateway was occasionally appearing in Generation X during this era, which doesn’t make his role totally out of place, although he’s never been able to teleport between realities before. Rogue is shown as a member of the team, even though this story explicitly takes place shortly after Wolverine#93 (the issue that sent Juggernaut to the Ultraverse). Rogue wasn’t a member at this point, and didn’t rejoin until next year’s Onslaught crossover.

Review: Continuing the series of overpriced “limited premium edition” Marvel/Malibu crossovers, we have Exiles Vs. X-Men. (By the way, I just discovered the Wolverine/Night Man, Exiles/X-Men, and Prime/Hulk crossovers were reprinted in an eighty-page, $6.95 special called Mutants Vs. Ultras. If you didn’t want to pay for the expensive mail-in comics, this was at least a reasonable alternative). This one fulfills the low expectations of an intercompany crossover comic, as the heroes cross dimensions through dubious means, fight the other reality’s heroes for no real reason, team up to fight a bigger threat, and then return home and absolutely never think about the events again. An inordinate amount of attention is paid to Ultraverse continuity, as we’re apparently supposed to know about the Exiles’ previous alternate reality adventures, which makes parts of the issue needlessly confusing. If the book is supposed to make me curious about the Exiles and willing to invest in the Ultraverse, it’s actually responsible for the opposite reaction (and I’m sure existing Ultraverse fans were already abandoning ship by this point). A tiny amount of characterization is given to Xavier, who worries about his stepbrother in the story’s opening, and is relieved to learn from Storm that he’s on the road to redemption at the end. Not that Juggernaut truly reforms any time soon (the man who will eventually write that arc is still doing porno comics at this time), but it’s the thought that counts.

jeez has that cover been done enough times

Is this considered in-continuity? Not that it really matters, I was just wondering how they explained Juggernaut disappearing if it wasn't (I assume the answer is: they don't.)