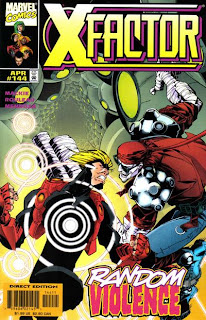 Summary: Shard and Havok unite to free Dark Beast’s human captives, until Fixx telepathically reveals the XUE’s mission to Shard. When Ever regains consciousness, he explains that the humans can’t be freed, as Dark Beast has infected them with the strain of the Legacy Virus that targets humans. Meanwhile, Random emerges to free Mary Stewart, a human he reluctantly kidnapped for Dark Beast. Random turns against Dark Beast and aids Havok, yet the villain still escapes. Ever volunteers to look after Mary and the infected humans in the underground lab.

Continuity Notes: According to the XUE, Havok freed the human subjects in their reality, inadvertently causing the deaths of millions of humans. This allegedly led to “a whole chain reaction of anti-mutant sentiments, Sentinels…” etc. Wasn’t it already revealed that Onslaught’s victory in Bishop’s reality lead to the anti-mutant furor, or did I imagine that?

We Get Letters: More denials the series is getting cancelled, as the editor states, “We’re just getting geared up for our 150th issue and man, do we have surprises!” Getting cancelled at issue #149 was probably the biggest surprise.

I Love the ‘90s: Havok lets out an emphatic “Not!” while fighting Mystique. I still contend that people weren’t actually using this slang in the late ‘90s.

Review: To Howard Mackie’s credit, this does resolve at least a few of the mysteries from the previous issue, which has to be a new record for this book. We now know that the XUE wants to stop Havok from freeing the humans because they’re carrying a plague, which works fairly well as a plot twist. Except, we have no idea why Mystique absolutely had to be a part of this mission, as she does nothing in this issue. And even though the XUE’s urgent mission from the future last issue was to stop Havok, they’re now asking for his help at the story’s end, as this was just one dangling thread and “time hasn’t been completely repaired yet.” Plus, this might’ve been an intentional misdirection, but the implication last issue was that Havok had to be killed, not just prevented from opening some cages. And, if humans infected with the Legacy Virus are a horrible threat to society, why has Moira MacTaggert been allowed to run free since 1994? Yes, she’s recently quarantined herself, but this was her choice, and it took her years to reach this decision. Overlooking the disappointing payoff, Random is (sigh) randomly inserted into the chaotic fight scene for no apparent reason, along with Fatale, who shows up for all of one page before getting blasted into apparent oblivion. Too many characters, too many vague plot points, and horribly distorted artwork. The book has reached lower points, but this is still atrocious.

"We’re just getting geared up for our 150th issue and man, do we have surprises!"
hahahaha
So sad to have such an important series end at issue 149....

Maybe this was their way of misdirection, to ruin any spoilers at the time?

And yeah, I can't believe I am defending the actions of late 90s X-editors...

"According to the XUE, Havok freed the human subjects in their reality, inadvertently causing the deaths of millions of humans. This allegedly led to “a whole chain reaction of anti-mutant sentiments, Sentinels…” etc. Wasn’t it already revealed that Onslaught’s victory in Bishop’s reality lead to the anti-mutant furor, or did I imagine that?"

Maybe it's one of those things where no matter how many ways you try to prevent it, the bad thing happens anyway. "Lost" did something like that a few years back. And I recall on the X-Men animated series in the early 90's, they did something similar with Bishop, where he kept going back in time to fix things, and every time he returned to the future, there was some new problem and he'd have to go back again.

Anyway, that's my reasoning. I doubt anyone in the X-Office gave it much thought.

“We’re just getting geared up for our 150th issue and man, do we have surprises!” NOT!!