THE FURTHER ADVENTURES OF CYCLOPS AND PHOENIX #4 – September 1996 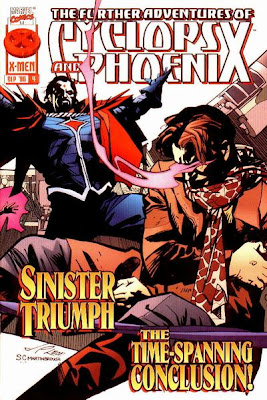 Summary: As Sinister emerges from his chamber, Cyclops attempts to kill him but has second thoughts. Sinister escapes with the help of Apocalypse’s sentient technology as the underground base begins to collapse. Sinister emerges deeper inside Apocalypse’s complex, holding his wife’s music box. He declares that he feels no remorse, so his transformation is complete. Nearby, Oscar and Daniel are attacked by Cootie Tremble. They’re rescued by Cyclops and Phoenix, who senses that Apocalypse’s experiments have ravaged his body. Sinister appears and kills him, claiming it’s a humane way of ending his suffering. Cyclops and Phoenix try to talk Sinister out of his deal with Apocalypse, which leads Sinister to at least tell them where to find Apocalypse. Soon, at Buckingham Palace, Apocalypse launches his attack against the British monarchy. Apocalypse defends himself against Cyclops and Phoenix until he begins to feel weak. Sinister enters, explaining that the plague he was ordered to develop unintentionally weakened him. Phoenix senses that he’s lying, as their bodies begin to shift out of time. Before they disappear, Phoenix erases the memories of the attack from the minds of the British royalty. Elsewhere, Apocalypse forces Sinister to admit that he turned against him, as Sinister explains that the plague Apocalypse wanted him to develop would have polluted the natural evolution of humans. Apocalypse allows him to live, telling Sinister that he will serve him when he returns. A year later, Oscar and Daniel arrive in America, posing as father and son. Daniel chooses the surname Summers to honor the people who freed him. Years later, Sinister visits Charles Darwin’s funeral and leaves behind his wife’s music box. Outside of time, Sanctity explains to Cyclops and Phoenix that their mission was not only to stop Apocalypse, but also to ensure that Sinister was created so that the future messiah Cable could be born.

Continuity Notes: Cyclops is able to alter the course of his optic blast after he decides not to kill Sinister, which I can’t recall him being able to do before. At the end of the story, Cyclops speculates that his fight against Sinister is what sparks his interest in the Summers bloodline.

Review: After Essex became Mr. Sinister in the last issue, there didn’t seem to be anywhere else for this series to go. Maybe having Apocalypse invade Buckingham Palace was intended to be a large climax, but the final confrontation comes across pretty flat here. Some of that has to do with Leon’s stylized art, which is well suited for creating landscapes, setting mood, and redesigning the characters for the nineteenth century, but doesn’t seem appropriate for a traditional hero vs. villain fight. The series has really been about Essex rejecting his humanity and becoming Sinister anyway, so there’s not a lot of investment in Cyclops and Phoenix’s fight in the first place.

The main appeal of the issue is the same as the previous three, which is Milligan’s characterization of Mr. Sinister. Milligan is able to leave the door open to the possibility that Sinister still retains some humanity without making it seem like a copout. Sinister dramatically declares that he no longer has human emotions after staring at his wife’s music box, but Phoenix’s argument that Apocalypse’s plan will kill children like his own, “nature at its most fragile”, seems to have some impact on him. Sinister’s reluctance to join Apocalypse is mostly explained by his unwillingness to serve anyone, but there’s also a sense that Sinister might have enough decency to reject his agenda. Sinister is still clearly a villain by the end of the series, but Milligan is able to make his transformation more plausible by giving him these doubts.

The rest of the issue consists of some leftover elements that don’t particularly work. Oscar and Daniel are revealed to be the original Summers (meaning that even the origin of the Summers family involves a time-loop), which seems like an unnecessary addition. The two characters didn’t have much of a personality or a real purpose in the series, and this doesn’t seem like a good enough reason to justify the amount of time that was devoted to them. How exactly the Summers family came to America isn’t really a question I was dying to have answered anyway, so this plotline left me cold. And now that the mini is over, I’m still not sure what purpose the Marauders and Hellfire Club were supposed to serve, either. The ending finally acknowledges that stopping Sinister’s creation would also prevent Cable from being born, which is used as a nice twist ending. However, it doesn’t exactly present Cyclops as the world's greatest dad, since this apparently didn’t occur to him during all of the times he contemplated killing Sinister. Despite my complaints, this still comes out as an enjoyable miniseries, which is especially notable since it was released during a time when quality control seemed pretty lax in the X-office. The art’s imaginative and unique, and the writing is sharp enough to make a story with a predestined ending remain engaging for most of the series.

I loved the revelation that Cyclops, in the past, created his own family and that by interacting with Sinister then, he created the obsession w/the Summers that motivates Sinister in the present.

Sure, they were shoehorned into the story a bit, but I love that kind of time paradox stuff in my time travel stories. It's like the icing on a cake :)

I'm glad you enjoyed this series! It easily ranks in my top ten favorite X-Men stories of all time, and is definitely my favorite Mr. Sinister story (followed closely by that Uncanny annual with Genesis, Beast, and Jean Grey -- which also had art by Leon for the flashback sequences). It's one of the few comics I bought as individual issues, then re-bought when the trade came out because I wanted it on my bookshelf!

It's just so dark and moody, and it gives you a fairly realistic depiction of how a well-meaning man could become Mr. Sinister. When Milligan came on X-Men a few years ago, I remembered this mini fondly, and had high hopes for his run based simply on these four issues. Unfortunately, it didn't live up to expectations (though he did give Sinister a cameo appearance on the final page of his last issue).

Also, "Cootie Tremble" has to be one of the greatest names ever to grace the printed page.

I'm fine with this adventure to the past causing Sinister's obsession with the Summers' bloodline. But the time-loop explanation of the creation of the Summers family gives me a headache. I think it was a bit of an unnecessary twist.

I did like the epilogue with Sinister in Darwin's funeral. It was a nice and fitting ending to the series.