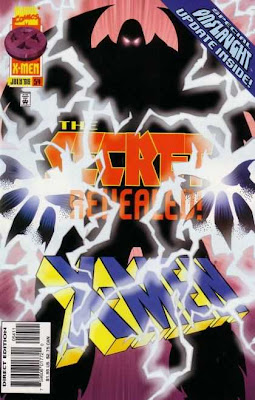 Summary: The X-Men search the grounds for Juggernaut, while he secretly meets with Phoenix in a psi-shielded chamber underneath the mansion. When Phoenix closes the door, Cyclops’ mental connection to her is gone. He visits the Professor and asks him to search for her. He also informs him that Phoenix didn’t tell him about her encounter with Onslaught because of his recent erratic behavior. Cyclops leaves, as Xavier broods. When he watches television footage of one of Dennis Hogan’s killers bragging that there are a million more like him, he erupts in anger. Meanwhile, Phoenix unlocks the secret of Onslaught’s identity inside Juggernaut’s mind. She tells Juggernaut to run away, and once he senses Onslaught inside his mind, he runs to Xavier’s office. Inside, he finds Onslaught, who rips the Crimson Gem of Cyttorak out of his chest. Xavier, whose mental image is entwined with Onslaught, calls the X-Men to his side. Elsewhere, the Beast escapes from his prison, but is confronted by three mysterious figures.

Continuity Notes: This story continues directly from Uncanny X-Men #334, but the continuity doesn’t exactly work. Cyclops’ meeting with Xavier’s mental projection is totally ignored, so he now has two contradictory meetings with Xavier that foreshadow the Onslaught revelation. In the last chapter, Cannonball was disturbed by Xavier’s outburst against him because he knew it was a sign that something was wrong with him. Here, Cannonball is taking the insult personally and seeking advice from Cyclops (in the last chapter, he told Storm directly that something was wrong with Xavier). Phoenix is also wearing the same outfit she wore in the previous issue, even though she changed clothes twice in Uncanny X-Men #334. The editor’s footnote acknowledges this and makes a joke about it.

Dennis Hogan was the young mutant killed by a mob in X-Men Prime while searching for the X-Men.

The psi-shielded chamber Phoenix takes Juggernaut to is the one Xavier used to hide in while preparing a defense against the Z’nox way back in Uncanny X-Men #65. Phoenix claims that she’s still the only X-Man who knows about it. Juggernaut implies that Xavier might've had ulterior motives in only telling her that he was faking his death, which bothers her.

Looking at old Usenet discussions, I notice some fans pointing out that Juggernaut actually threw the Crimson Gem of Cyttorak into space in the final issue of Marvel Team-Up. The idea that the gem somehow lives inside of him seems to be Waid's invention in this issue.

I Love the ‘90s: The narration jokingly says that Cannonball will have the nerve to confront Professor Xavier on Thanksgiving 2005.

Review: Well, it’s another issue set at the mansion that’s building up to the Onslaught revelation. Xavier is finally revealed to be Onslaught, even if the official revelation was a little vague for me at the time (I wondered if perhaps Onslaught was some outside entity that had possessed Xavier). Since this month’s issue of UXM already covers most of the same ground, it’s hard not to view this one as pretty redundant. The continuity screw-ups are also annoying, since both UXM and this title have the same editor and are supposed to be sister titles. Scott Lobdell briefly addressed some of these complaints on Usenet at the time; essentially chalking them up to the increased workload of Marvel’s remaining staff after the layoffs, and Marvel’s desire to keep the X-titles on schedule. This script could’ve definitely benefiting from a rewrite or two, even if you’re willing to forgive the continuity mistakes. Why exactly Phoenix tells Juggernaut to physically run away while they’re protected inside a psi-shielded vault makes no sense. The fact that she doesn’t even tell him who Onslaught is, which just leads to the Juggernaut running straight to him anyway, is outright silly (I realize that Onslaught’s identity was being withheld for the end for dramatic reasons, but logically there’s no reason for Phoenix to keep the info from Juggernaut). And why on earth didn’t the Juggernaut put his helmet (which protects him from telepathic attacks) back on while he was running away?

It’s also amusing to me that during a montage of all of the traumas that Xavier has undergone in recent months, the death of his son is ignored. Actually, I can’t think of single reference to Legion’s death after X-Men Omega, which is strange. If all of Xavier’s pain and frustrations were supposed to lead to Onslaught’s creation, certainly Legion’s death would’ve been a legitimate area to explore. I wonder if the nonsensical nature of Legion’s death scene lead to Marvel’s decision to just ignore it. There are still a few nice moments, such as Phoenix’s interaction with Juggernaut, and Kubert’s dramatic interpretation of Onslaught emasculating Juggernaut. It really is a happy accident that Juggernaut was chosen to be Onslaught’s first victim before anyone at Marvel had decided that he would turn out to be his stepbrother. The idea that Xavier subconsciously waited his entire life to become stronger than Juggernaut and get payback for his childhood bullying is a clever angle for Waid to take.

After several strong issues in a row, the art is a little disappointing. I’m assuming that this can be chalked up to Dan Panosian’s inks, which lack the earlier energy of Matt Ryan’s and the polished look of Cam Smith’s. Many of the lines now look sketchy and half-finished, which doesn’t suit Kubert’s style. It’s still a nice-looking comic, overall, it just lacks the visual impact of the preceding issues. The cheaper paper stock doesn’t do the title’s look any favors, either, as we’re back to the days when black shadows aren’t very dark, and none of the colors are particularly vibrant, even with computer enhancement.

i was just dabbling in Marvel books during the period you're covering. I remember reading this issue and thinking that this must be what "good" comics are like, since everybody I knew was into the X-Men. I was stupid.

Man, this right here, THIS reveal, was what drove me away from the X-books. Final damn straw. And barring some unfortunate dabbling in Ult. X-men and now the delightful First Class books I haven't been back. Not for Morrison or Brubaker or Whedon or even Ellis. And I like those writers...