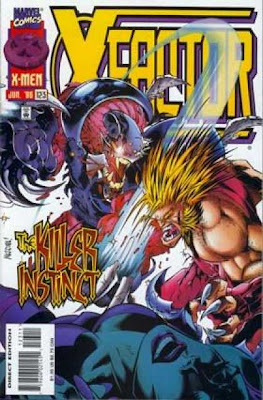 Summary: X-Factor watches as Sabretooth fights the Hound, a genetically enhanced mutant hunter. The team joins the fight, but learns that the Hound can counteract their mutant powers. Polaris focuses her powers and manages to knock the Hound unconscious. Forge taps into the facility’s database as a team of masked government agents appears. One of Val Cooper’s friends, Gladstone, is with them. He tells her that he’s been sent to ask for her cooperation. He doesn’t know what’s going on in the facility, telling her that they should both forget about the place. Meanwhile, shadowy government agents invade X-Factor’s headquarters and attempt to steal data from Forge’s databanks. Shard appears and chases them away. At Graydon Creed’s campaign headquarters, a man named Mr. Harper brings a large cash donation from a mysterious donor. Two days later, Val Cooper takes Senator Kelly to the facility where the team faced the Hound, only to discover that it’s now a farm being used for agricultural research.

Continuity Notes: Sabretooth tells X-Factor that he was sent alone to kill the Hound because the government didn’t want to risk X-Factor on the mission. The Hound describes himself as a mutant who has been turned into a weapon by the government. His first target was Mystique (as seen in X-Men Prime), but he failed.

Senator Kelly seems to be fine after Graydon Creed's attack in UXM #333.

Mr. Harper’s employer isn’t named, but it’s intimated to be Bastion. It’s implied from Creed’s conversation with Harper that the Hound was sent after Mystique as a favor to him. Creed claims that Mystique possesses info that could “prove damaging to us all”. It’s established that Mystique is Creed’s mother and that he hates her, but this is the first time it’s been implied that she knows something about Bastion (if in fact Harper’s employer is Bastion). It's possible that simply the revelation that she's Creed's mother is enough to disturb Bastion, who wants Creed in office. Harper tells Creed that he’s suggested to his mysterious employer that they keep Mystique around just to “keep you in check”. There’s certainly a lot of implying and inferring in this two-page scene.

When Forge taps into the facility’s database, he sees Rory Campbell’s name as a part of the coded information. I assume that this is supposed to tie in to the idea that Rory will one day become the mutant-killer Ahab, but if the story’s implying that Campbell is actively working to target mutants now, that contradicts his current character arc in Excalibur. Also, Forge can apparently shoot energy blasts out of an attachment to his metal hand now.

Review: I never watched The X-Files, but I’ve always assumed that the show was influencing Howard Mackie as he wrote this series. Didn’t X-Files have the agents constantly coming up against mysterious government entities that hindered their investigations? I seem to recall Mackie using that bit more than once during this era, as the team was placed in-between rival government agencies with conflicting motives. In this issue, the mysterious government officials in charge of Sabretooth want the mutant-killer Hound dead, although I assume the government agency that created him (presumably lead by Bastion), wants to keep him alive. Or perhaps the agency that created the Hound deemed him a mistake and wanted him dead? Or does someone in the government want Sabretooth dead? And if the Hound was created by Bastion, why is he genetically altered and not a cyborg like the rest of Bastion’s soldiers? None of these questions are actually intriguing within the story, they just make the plot seem needlessly confusing. There’s no clear motive for anyone’s actions, and “mystery” is being used as an excuse for some of the nonsensical plot elements. I suppose you could use the government itself as a legitimate adversary for the team, but the execution is here is boring and cliché.

Aside from the nonsensical plot, there are also the continually flat characterizations. All of the characters have bland dialogue, and the only thing approaching an internal conflict is when Polaris has to concentrate really hard to undo the Hound’s neutralizing effect on her powers. This scene is extremely bland also, since it relies on the clichéd “hero strains themselves really hard to do something they couldn’t do a few pages earlier” trick. Matsuda’s art remains inconsistent, as a few decent cartoony images emerge on the occasional page, but the majority of the issue is marred by ugly faces, odd poses, and bizarre anatomy (Sabretooth’s legs are attached to his chest on the first panel of the first page). This is pretty dire stuff.