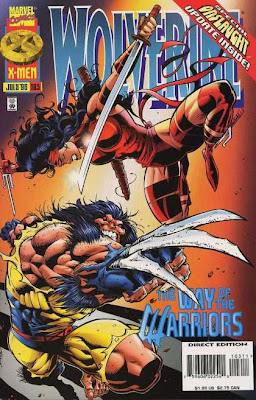 Summary: Wolverine climbs to the top of a skyscraper to meet Elektra. Elektra believes that if Wolverine is retrained in the martial arts, then he can begin to regain his humanity. She locks him inside a refrigeration chamber and challenges him to think. He breaks free, and remembers the missing ideogram from Elektra’s wall scroll. He finds her underneath a water tower with the missing “mountain” symbol painted on its side. She gives him a sword to duel with, which he quickly loses in the fight. He manipulates Elektra into kicking him back to where he lost the sword, enabling him to ambush her. Elektra is content that Wolverine is regaining his humanity, because she knows that it’s harder to sheathe a sword than draw it.

I Love the ‘90s: The skyscraper Wolverine climbs to the top of is one of the World Trade Center towers.

Review: Since it was decreed that Wolverine would essentially become an animal, and that Elektra would guest star for several months to promote her upcoming series, it’s not surprising that we ended up with a martial arts-themed issue that deals with the nature of man. There’s some decent character work here, but for the most part it reads like a time-killer until next month’s crossover. The martial arts philosophy doesn’t get particularly deep, but I like the fact that Hama emphasizes the idea that avoiding violence is often the greatest challenge for a man. He also uses the training sequences to reaffirm the idea that Wolverine is supposed to be as sneaky and crafty as he is vicious. There’s some attempt at treating Elektra as more than just a generic sensei character, as Hama recounts her origin and gives her a few first-person narrative captions. He handles her character competently, but it’s still pretty obvious that she’s being thrown into the title for commercial reasons. Val Semeiks’s fill-in art is capable enough, but his interpretation of the bestial Wolverine just emphasizes how incredibly ugly the design was in the first place. Rather than looking wild and feral, he often just looks like a Muppet with sharp teeth.